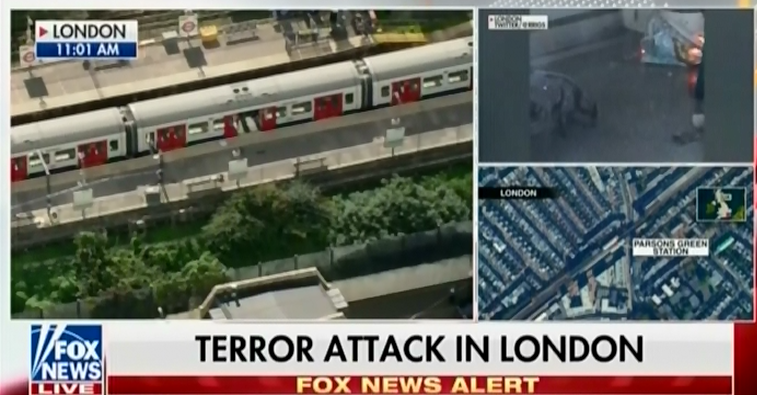 Fox & Friends’ coverage of an apparent terror attack in London demonstrated Fox News’ playbook for exploiting acts of terrorism at home and abroad by spreading misinformation about the incident and turning to discredited Islamophobes for insight into the nature of terror threats.

According to reporting from the BBC and other news outlets, an “improvised explosive device” was detonated in a London Underground passenger car as it waited at the Parsons Green station during Friday morning rush hour traffic. According to The New York Times, more than 20 people were hospitalized for injuries as a result of the explosion, which is being treated as a terrorist attack, and an investigation is underway to find those responsible. As the story unfolded, little was known of the device, the person or people involved, or the extent of damage sustained in the explosion. But the lack of evidence did not stop Fox News from exploiting the event to promote its own agenda.

The September 15 edition of Fox & Friends -- President Donald Trump’s preferred news source -- offered nearly wall-to-wall coverage on the events in London during the program’s opening hour. The coverage began with co-host Brian Kilmeade interjecting with unsubstantiated claims that police were actively trying to defuse “another bomb in the same station” during a report from Fox correspondent Amy Kellogg in London. Kilmeade repeated the unsubstantiated report of a second bomb -- seemingly sourced from British tabloids -- several times during the course of the program. Reports of a second explosive device, as well as of a knife-wielding assailant evading police, which Fox also reported, were soon debunked.

Hanson is a frequent Fox guest and a vice president at the Center for Security Policy, which the Southern Poverty Law Center has designated an anti-Muslim “hate group.” During his first September 15 appearance, Hanson surmised without evidence that the individual responsible for the London bombing was a Muslim and likely “known to police.” He used a later appearance to endorse Trump’s attempts to ban certain Muslim travelers from entering the United States. He also hyped the supposed threat of “second generation” Muslim immigrants, whom he claimed make up “a lot of the bombers … and the knifers and the truck drivers” who attack civilians. (Terror plots and attacks in the U.S. overwhelmingly emanate from largely white, right-wing extremist groups, not Muslim communities.)

Mitchell, another frequent Fox guest regularly called upon to comment on terror attacks, was the architect of the CIA’s illegal Bush-era torture program, for which Fox News called him a “patriot.” The September 15 segment quickly glossed over his involvement in what co-host Steve Doocy referred to as “interrogating terrorists” before Mitchell was given free rein to slam the United Kingdom’s “immigration policies,” which he believes “deliberately or inadvertently … allowed these hotbeds of radical Islamic ideologies to be created.” (Mitchell's ”hotbeds" rhetoric seems to mimic Fox News’ obsession with so-called “no-go zones” in the U.K., which it claims are a breeding ground for Islamic extremism -- a stance that has proved to be an embarrassment to the network in the past.)