In December 2018, Fox & Friends ran a segment about “real estate secrets” that promoted former co-host Clayton Morris’ rental property company and his recommendation that viewers buy rental properties as a passive investment. Several months later, Morris’ company is under scrutiny and he and the company are reportedly being sued by “nearly two dozen customers.”

Morris is a former Fox & Friends Weekend co-host who left the program in September 2017 to devote time to his company Morris Invest, which claims to have “helped hundreds of people buy their first rental property" and "renovated thousands of homes and filled them with happy tenants.”

In his farewell segment at Fox, Morris told viewers that he would be helping people “build wealth and passive income.”

But The New York Times’ Matthew Goldstein reported on March 25 that Morris and his company are now being sued by “nearly two dozen customers who say they were sold ramshackle homes as investment properties.”

Morris Invest helped sell at least 1,000 properties over the past two years, reaping more than $5 million in referral fees and profits from the sales, according to resale prices and interviews with investors and a lawyer for a former business partner. But Mr. Morris’s customers said many of the homes in Indianapolis had cost them dearly.

Nearly two dozen customers are now suing Mr. Morris and his company. They contend that the properties were in worse shape than advertised, and that rehab work paid for upfront was done poorly or not at all. Vacant lots sold on the expectation of new homes being built are strewn with trash. One house gutted by fire was sold a few days later to an unwitting investor, according to a lawsuit.

The Morrises face a half-dozen lawsuits, including one in federal court, and more will probably follow. Lawyers in Indianapolis are fielding calls from disgruntled customers and angry renters, and Indiana’s attorney general has opened an investigation. In response to a Freedom of Information Act request, the Federal Trade Commission said it had received 21 consumer complaints.

Morris claims that he and his wife are also victims and blame their former business partner Oceanpointe Investments for the problems; the Times wrote that Oceanpointe “was the seller of the homes the Morrises’ clients bought, and, according to the couple, it was supposed to do the renovations and manage the properties. … Oceanpointe blames the Morrises, saying they are responsible for the promises made to investors.”

The Indianapolis Star’s Tim Evans and Tony Cook also extensively reported on Morris Invest for a March 26 article, reporting that “for many buyers, the purchases turned into nightmares. Some say their houses were never rehabbed or rented. Others say they received rental checks for several months only to learn later that the house was vacant or uninhabitable. Many discovered the problems after receiving violation notices from city code enforcement or the county health department.”

The Star reported that “investors who say they were scammed told IndyStar they trusted Morris largely because of his public profile.” One customer told the publication that he “purchased his first property through Morris while he was still a ‘Fox & Friends’ co-host. A self-described Fox News junkie, [the customer] said he felt like he knew Morris from watching him on TV every weekend.”

Morris frequently promoted Morris Invest on Twitter while he still worked at Fox News, and he later returned to the network to tout his new career.

Fox & Friends helped Morris promote his business to viewers in a December 18, 2018, segment about financial tips (the interview is still available on Fox News' website*). The show billed the segment as “Clayton shares real estate secrets” and put MorrisInvest.com on-screen. 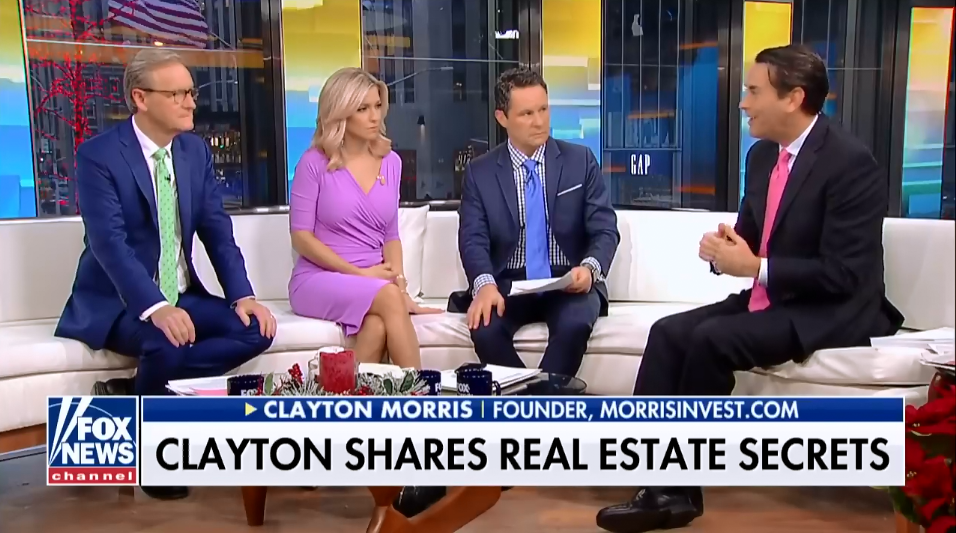 During the segment, Morris told viewers that they could buy a rental property as a way to earn passive income. “You started buying rentals, right?” Ainsley Earhardt asked Morris. “I did while I was here,” Morris replied.

At the end of the segment, Fox & Friends and Morris promoted Morris Invest's YouTube channel. Co-host Brian Kilmeade told Morris: “You explained it in a way even I can understand, which is not easy.”

The Times added that “Morris said it was not until spring 2018 that he became fully aware of the problems his customers were having with Oceanpointe. The relationship formally ended in May.” The publication additionally reported that “the Morrises have largely gotten out of the real estate business in Indianapolis” and Morris Invest is “no longer their top priority. The Morrises are now selling an online financial advice and planning program: Financial Freedom Academy.”

*Update (3/27/19): Following the publication of this piece, FoxNews.com removed the December 18 Morris segment from its website; an archive of it can be found here.