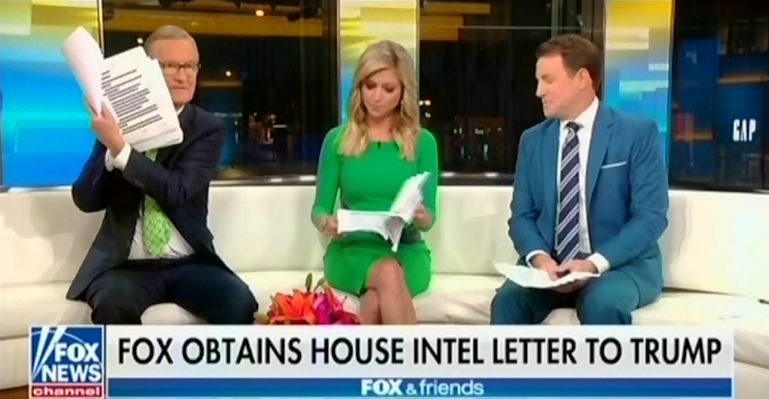 Fox & Friends is lying about an application presented to the Foreign Intelligence Surveillance Court regarding Trump campaign adviser Carter Page.

On July 21, for the first time in the history of the Foreign Intelligence Surveillance Act (FISA), the Department of Justice disclosed an application to conduct surveillance of an American citizen, releasing the application to conduct surveillance of Page since 2016. After its release, Fox & Friends leapt to mischaracterize the document, saying the government did not mention that part of the evidence that supported the application “was funded by the DNC and Hillary Clinton['s]” campaign, and attacking a Yahoo News article cited in the application because a source of its information was allegedly Christopher Steele, former head of the Russia desk for Britain's Secret Intelligence Service. Co-host Steve Doocy went on to complain about how much information was redacted in the publicly released application, saying, “There’s a lot of stuff here that you would think is not a method of surveillance or anything like that.” Doocy then asked, ”You think [the FISA judge is] going to read all that stuff?”

Later in the show, Fox & Friends hosted Judicial Watch’s Tom Fitton, who claimed that “there was no good reason not to inform the court that” part of the application had political origins, “other than to, again, mislead the court into providing a pretext to spy on the Trump team.”

But, according to The New York Times, “the application shows that the F.B.I. acknowledged to the court that it believed that the person who hired Mr. Steele was looking for information to discredit Mr. Trump’s campaign.” Specific names were masked, as is standard operating procedure for such applications. The Department of Justice included Yahoo News in the application because, according to New York Times national security reporter Charlie Savage, officials wanted to inform “the court that Page had denied the allegations about” his contacts during a July 2016 trip to Moscow. Moreover, as Savage notes, “Some say the Steele dossier was the sole basis of the application. That's false. There are redacted pages of other facts + we can see [the application] cited info from a prior investigation into Russian spies who sought to recruit Americans,” including Page.

This is not the first time right-wing media have pushed dishonest claims regarding the FISA application for surveillance on Page.

From the July 23 edition of Fox News’ Fox & Friends:

TODD PIRO (GUEST CO-HOST): What we have to remember, in normal criminal procedures, a defendant gets to defend him or herself. In a surveillance situation, obviously secrecy is paramount. Because of that, the court and the people applying for the application need to be completely above reproach. That did not happen here, and, as a result, we’re in the situation we're now.

AINSLEY EARHARDT (CO-HOST): Well, because they used unverified information to spy on Carter Page or the Trump administration, and it was funded -- as the president tweeted over the weekend, reminding all of us -- it was funded by Hillary Clinton or by the DNC.

STEVE DOOCY (CO-HOST): Right, but they never told that to the [Federal Intelligence Surveillance Court] judge.

DOOCY: The federal authorities used both the Steele dossier and the Yahoo News article that we’ve talked extensively about to convince the FISA court to grant the application. And, with the 412 pages right there, those also include the renewals. Four times the FBI told the FISA court it did not believe that Christopher Steele was the direct source for the Yahoo News story, which prompted the FISA warrants. He wasn't the source. And yet, in London court records, they show that Steele briefed Yahoo News and other reporters at the direction of Fusion GPS, which is the opposition research firm -- there’s Chris Steele right there -- behind the dossier. And they describe Steele as somebody hired by a business associate to conduct research into Trump's Russia ties, but do not mention that Fusion GPS was funded by the DNC and Hillary Clinton.

EARHARDT: That's why those 13 Republicans wrote that letter to the president in June, and that included [Rep.] Trey Gowdy [(R-SC)], it included [Rep.] Devin Nunes [(R-CA)], and they were saying there are irregularities with the sources. The information is not consistent. They also have a problem with the FBI’s own Domestic Investigations and Operations guide, it prohibits the FBI from using unverified material to obtain FISA warrants. They’re saying that dirty dossier that the president tweeted about this weekend, he called it the dirty dossier, that was used to spy on Carter Page. It was unverified, which means that is illegal.

DOOCY: Well, the big question is, and the Republicans have asked for a while asked for un-redacted versions, is the Republicans are now -- I think it was [Rep.] Mark Meadows [(R-NC)] of North Carolina that said keep the names, the methods, and the secrets secret. But everything else, I mean, there’s a lot of stuff here that you would think is not a method of surveillance or anything like that.