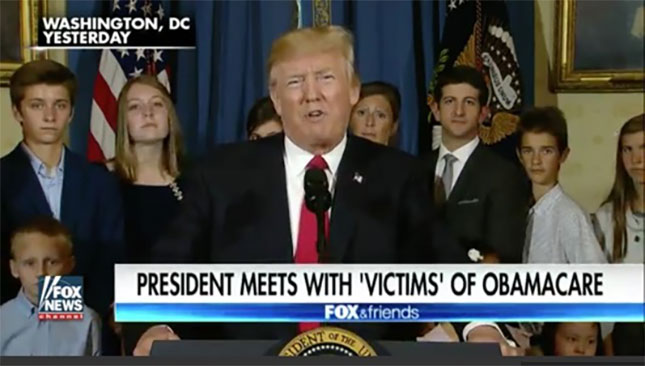 As the Senate Republicans prepared to vote on a bill to repeal and replace the Affordable Care Act (ACA), Fox & Friends spent the morning misleading its audience about congressional procedure heading into the vote, omitting key details in an interview with a critic of the ACA (a mother who blamed health care reform for a lack of options for her son's care), and failing to mention that the GOP sabotaged the ACA for years. The hosts also, directly and indirectly, pressured Republicans into voting for the bill while shifting blame away from President Donald Trump if it fails.

One of the first health care segments on the July 25 edition of Fox News’ Fox & Friends was an interview with Marjorie Weer, a mother who was invited to the White House on July 24 to serve as an example of someone victimized by Obamacare.

During the interview, Weer discussed her son’s disability and said the ACA has made it more difficult for her son to get care. Co-host Ainsley Earhardt, who conducted the interview, left out a few previously reported details of Weer’s story wherein her family directly benefitted from health care reform. A July 24 article in The Post and Courier pointed out that Weer and her family “benefited from the Obamacare provision that insurance companies cannot deny coverage to an individual because of a preexisting condition.” The Weer family also benefited from another provision banning “lifetime spending limits.”

Additionally, Earhardt failed to note that cuts to Medicaid in the Republican-authored bills under consideration in Congress would cause sweeping cuts to special education programs, which would presumably be important to many families with a child who has a disability. During her Post and Courier interview, Weer admitted that her son has actually benefitted from Medicaid, which she called a “lifesaver” before endorsing efforts to “rein it in.” The Post and Courier added: “Ultimately, Weer said, she felt fairly confident that under the Senate Republican bill, preexisting conditions protections would be preserved, along with the ban on lifetime spending caps. Whether the legislation sufficiently accomplishes these goals is, in fact, subject to debate between supporters and critics.”

The topic of health care also came up when the hosts of Fox & Friends interviewed Sen. Joe Manchin (D-WV) later on in the program.

In the interview, co-host Steve Doocy attempted to pressure Manchin into voting for a motion to proceed to a debate for legislation to replace the ACA by misleadingly suggesting that senators “can offer up amendments and change it to anyway you want it.” Doocy added that it appeared as if Democrats “are a party of no” because they do not support a motion to proceed. Manchin corrected Doocy, telling him, “That’s not the way it works in the real world.” Manchin pointed out that Senate Majority Leader Mitch McConnell (R-KY) would be able to control what amendments are in the bill and would have the power to exclude Democratic amendments.

During a later segment, co-host Ed Henry also framed the Senate vote by laying out the current state of Obamacare, saying that the health care system was “struggling” with costs and falsely claiming, “the exchanges are falling apart.”

Henry also brought up “the destruction of the exchanges” again when he was recapping Weer’s interview.

Henry left out some important context. The challenges the exchanges face today are largely due to Republican sabotage at the state and federal level. As The Washington Post noted, Republicans in Congress blocked funding to build a federal exchange and urged Republican-led states to “refuse to build their own insurance marketplaces.” Additionally, Politico reported, “Congressional Republicans refused repeatedly to appropriate dedicated funds" needed for the federal government to “take at least partial responsibility for creating marketplaces serving 36 states” that “declined to create their own state insurance exchanges.” Republican stonewalling left “the Health and Human Services Department and other agencies to cobble together HealthCare.gov by redirecting funds from existing programs,” according to Politico.

Fox & Friends also spent time pressuring Republican senators, either directly or indirectly, to support the bill. In an interview with Fox contributor Newt Gingrich, Doocy suggested that if they don’t support the bill, Republicans could look like they were “fibbing” when they promised for years to repeal the ACA.

And in an interview with Sen. Rand Paul (R-KY), who has spoken out against both the health care reform law and numerous GOP replacement plans, Doocy said that “millions of people who voted for you guys are going to be disappointed” if any Republican senators object to proceeding with debate.

As Obamacare’s fate is uncertain for the time being, the hosts covered their bases and attempted to deflect blame from Trump if the bills under consideration in the Republican-controlled Congress fail. Earhardt asked White House Press Secretary Sarah Huckabee Sanders if Trump would “take the blame” if a repeal bill does not pass, leaving Huckabee Sanders to defend her boss and pre-emptively slam congressional Republicans.