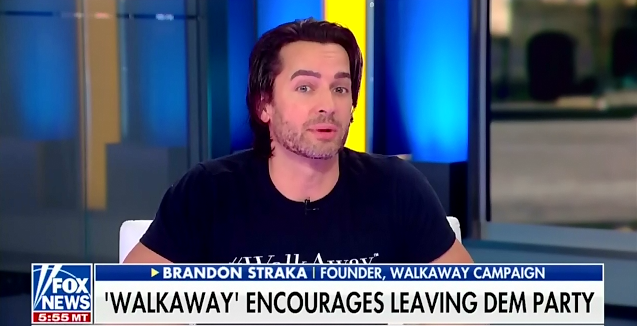 Fox & Friends is promoting an astroturfed social media “movement,” the #WalkAway campaign, that has been hyped on The Alex Jones Show and promoted by social media bots.

On the October 2 edition of Fox & Friends, co-host Ainsley Earhardt interviewed Brandon Straka, the supposed founder of the #WalkAway campaign, which encourages voters to “walk away” from the Democratic Party. During the appearance, Straka complained of an apparent “dishonesty” within the “liberal media,” promoting his hashtag, website, and an upcoming “march on Washington” in the process.

Straka’s “movement” is really an astroturfed social media campaign that has been amplified by both Infowars and Russian bots. Since early July, when the hashtag began to trend on Twitter, Straka himself has appeared on multiple Infowars shows to promote his so-called movement, and an analysis of the hashtag on Twitter found it to be a “psychological operation” aimed at shaping conversations in cable news segments, such as his appearance on Fox & Friends. According to multiple analyses, the hashtag's spread was largely driven by non-human activity, and accounts that tweeted in support of the “movement” had used pro-Trump hashtags such as #maga, #fakenews, and #qanon before they “walked away” from the Democratic Party. Moreover, according to Snopes, the campaign’s supporters have promoted the hashtag with misleading stock photos of people who had supposedly “walked away” from the Democratic Party, though Straka claims the photos were not actually created by the campaign itself.

From the October 2 edition of Fox News’ Fox & Friends:

BRANDON STRAKA (FOUNDER, #WALKAWAY CAMPAIGN): Nice. Well, it's a bit of a long story. But, in general, what it was was, I really came to the realization that the liberal media was incredibly dishonest throughout the campaign of Donald Trump, creating a narrative about who he was and who his followers were. And that really opened my eyes to their dishonesty. I actually think he is a really amazing president, and I think that the people in this country who support him are really good people, but they have gotten a really bad shake from the liberal media.

EARHARDT: Do you think that there are other people that feel the way do you and they’re just being quiet about it? Because we saw in the election, a lot of people were too afraid to say that they were supporting the president.

STRAKA: Right, well, this is what I say all the time in the campaign is that it is time for the silent majority to become un-silent, and that's really what's happening, I think, with the #WalkAway campaign. It's a testimonial campaign, and people are creating their testimonials, and they're finding the courage to speak their truth for the first time. It's really created a network of support. In fact, we have a #WalkAway march on Washington next month, which is really going to be a massive demonstration of solidarity.

EARHARDT: So it's walk away from the Democratic Party and support us?