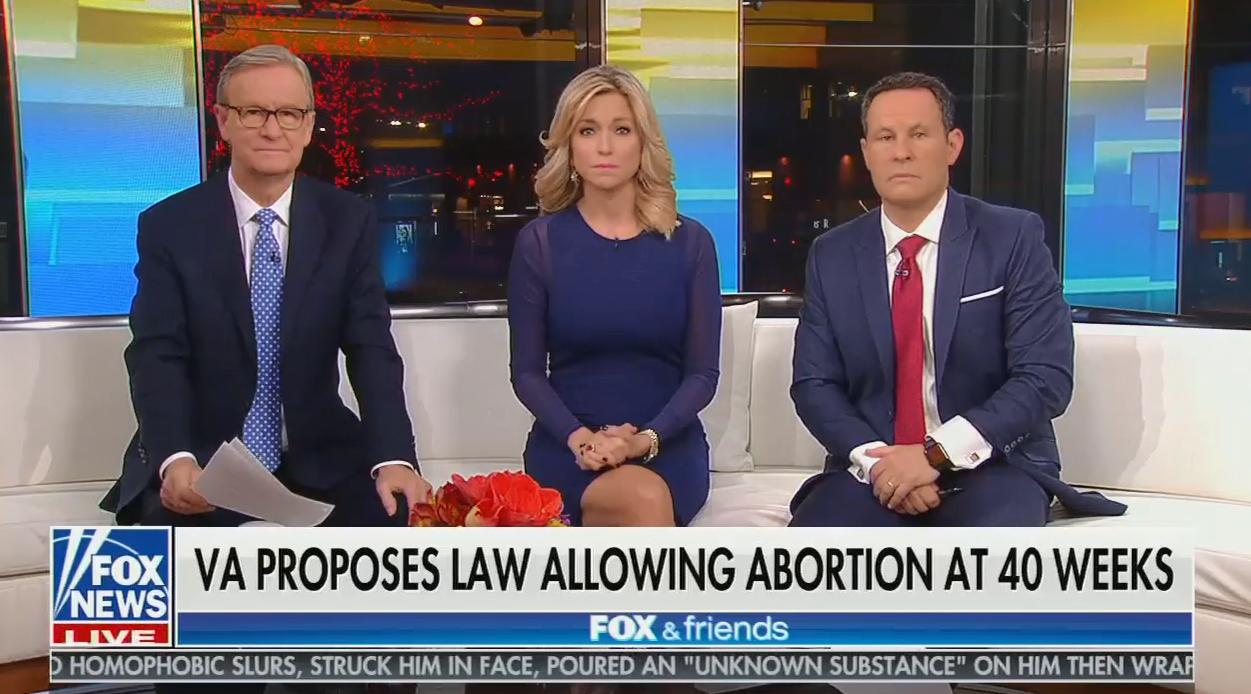 New York recently passed a law protecting and expanding abortion rights in the state, and a similar bill was just introduced in Virginia. Fox News has led the charge of right-wing media outlets that have responded by pushing a steady stream of anti-choice misinformation. And the January 30 edition of Fox & Friends exemplified exactly how not to cover abortion rights by airing segments with a number of absurd and baseless allegations that not only misinformed viewers but also shamed those who need access to later abortions as a necessary part of health care.

On January 22, New York Gov. Andrew Cuomo signed the Reproductive Health Act, changing a pre-Roe v. Wade state law that criminalized abortions after 24-weeks of pregnancy to now allow abortions “when the fetus is not viable or a woman’s health is at risk” with the consent of a doctor. Right-wing media responded by framing the law as a “barbaric” action by Cuomo and the New York legislature.

Legislators in Virginia also introduced a bill in January that would protect abortion rights by eliminating some restrictions on abortion care, including one currently requiring three doctors to consent for a patient’s third-trimester abortion. On January 29, a video of the bill’s Democratic sponsor discussing the legislation went viral, with right-wing media and anti-abortion figures falsely claiming it as evidence that both Virginia and New York were promoting abortions up until the moment of birth.

On January 30, Fox & Friends put on a masterclass in misinformation, airing multiple segments with inaccurate and stigmatizing claims about both the legislation in New York and Virginia, and about later abortions more broadly.

During Fox & Friends’ January 30 coverage of the Reproductive Health Act and the bill introduced in Virginia, the hosts repeatedly alleged that such measures allow abortions “right up to the moment of birth.”

For example, in one segment, co-host Ainsley Earhardt argued that both New York’s law and the Virginia bill would let someone “carry a child all the way to the day of birth and then decide not to have that baby.” In a second segment, Earhardt repeated this claim, saying each would allow an abortion to happen “all the way up until the very day you are supposed to deliver.” In each segment, co-host Steve Doocy agreed with Earhardt’s inaccurate claims, saying that he believed each measure would allow abortions to be performed “up until the moment of birth.” Doocy also added his own misinformation, claiming that these procedures could happen “as you are dilating, right there at the time of birth,” or when someone was “on the table, … you could abort the baby right then.”

Abortions at “the moment of birth” are not a thing that happens, no matter how much Fox News repeats this false claim as if it were fact. As Forbes’ Tara Haelle explained in 2016, “Those who seek late-term abortions are seeking them before a pregnancy reaches full term but often and unfortunately after they have discovered in the second or third trimester some problem with the fetus or danger to the mother.” Later abortions, although often medically necessary, are extremely rare, with slightly more than 1 percent of procedures performed past the 21-week mark. In other words, later abortions are not entered into lightly or often, and are almost certainly not occurring with the frivolity and carelessness that Fox & Friends’ coverage suggests.

In a segment focused on responses to viewer questions, all three co-hosts read and agreed with viewer messages containing stigmatizing and inaccurate language. For example, co-host Brian Kilmeade read a comment claiming these measures were “out of control” and that it should be considered “murder at this point in the pregnancy” to have an abortion. These sentiments were echoed in comments read by Earhardt and Doocy, who in turn shared and supported viewer messages calling it “mortifying” to “terminate a child who is able to cry” and lamenting that “these folks have no heart. It’s a disgrace.” In a second segment, Kilmeade read a viewer comment alleging that the Virginia bill “makes all parties involved no better than criminals on the streets that murder.” Earhardt turned her attention from the lawmakers to specifically shaming people who have later abortions, saying, “It blows my mind how a mom can do that. And it’s heartbreaking.”

Far from these depictions promoted by Fox & Friends, later abortions are performed for complicated personal and medical reasons. The people that Fox News figures and their viewers’ comments compare to murderers often have to make the difficult decision to end a wanted pregnancy because of a nonviable fetus or due to the great medical risk to the pregnant person. If Fox News really wanted to understand “how a mom can do that,” they could read accounts of those who actually had to make the choice of having a later abortion rather than demonizing those individuals and feeding a larger right-wing media frenzy.

Although most of the right-wing ire about the New York law and similar measures has focused on permitting later abortions (even though Virginia already allows them), Fox & Friends’ January 30 coverage also promoted misinformation about a provision in the Virginia bill concerning doctors’ involvement with such procedures. The Virginia bill would eliminate an unnecessary roadblock to abortion access that requires three doctors to agree before a patient can have a medically necessary later abortion. Instead, only one doctor would be needed.

Fox & Friends lied about this provision, with Earhardt inaccurately claiming that the Virginia bill would “eliminate the doctors” from the process of approving an abortion so that “anyone can do it, doesn’t matter if the doctors approve or not.” In reality, the proposed bill removes the burdensome requirement to have three separate doctors approve a later abortion procedure.

Fox News already sensationalized its coverage of New York’s Reproductive Health Act in a number of segments across the network, but the January 30 edition of Fox & Friends focused on the new Virginia bill as a harbinger of extremism “spreading” from New York to other states.

Most of Fox & Friends’ January 30 segments linked the New York law to broader discussions of the Virginia bill. In one segment, Earhardt made the connection between the network’s coverage of the two measures explicitly, saying that the provisions of the New York law that “blew many people’s minds” were “also spreading in our country.” In other segments, Earhardt made the connection more subtle, merely suggesting that “in Virginia, they’re talking about something similar,” or claiming that lawmakers were now “talking about it in the state of Virginia.” In each example, Earhardt and her co-hosts used outrage about the New York law -- largely stoked by Fox News and other right-wing media outlets -- to manufacture urgency and paranoia about the Virginia bill and the likelihood that other states may attempt to protect and expand abortion rights.

Instead of characterizing New York’s law as an outrage that is “spreading” to other states, Fox & Friends should recognize the legitimate risk that the Supreme Court could overturn Roe v. Wade, particularly after the confirmation of Justice Brett Kavanaugh. As a result, lawmakers have felt the need to protect or expand abortion rights. While the Virginia bill that Fox & Friends spent a significant amount of time fearmongering about isn’t even likely to pass, the Supreme Court could deliver a significant blow to Roe as soon as this week when it considers whether to stop a Louisiana law that would close the state’s final abortion clinic.