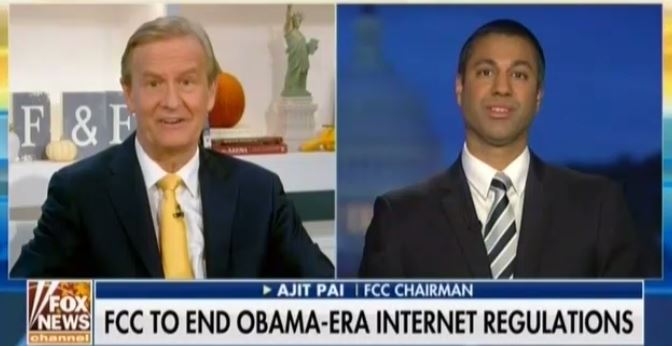 Ajit Pai, the Republican-appointed chairman of the Federal Communications Commission (FCC), enjoyed a lighthearted interview on President Donald Trump’s favorite news program this morning in which he was allowed to spin the reasons he is rescinding Obama-era consumer protections guaranteeing fair and open access to the internet.

During a November 22 interview with Fox & Friends, co-host Steve Doocy allowed Pai to dubiously defend his plan to repeal net neutrality standards that were implemented in 2015 as a win for “the internet economy in America” and for nearly 300 million internet users in the United States. Doocy presented his guest with easy questions, which Pai quickly deflected with talking points claiming that his move to gut net neutrality was merely a return to the same “free and open internet” expected by consumers “before these regulations started.”

But Pai’s move to end net neutrality, which classified high speed internet as a public utility, is widely viewed as a win for the telecommunications giants. It is also a big win for conservative media, including Fox News, which vilified net neutrality during the Obama administration.

Internet advocates warn that service providers may soon charge extra to unlock faster access to popular websites and online content, as is already the case in some countries, but Pai brushed off those concerns as “a false fear” while passing responsibility for regulating these predatory business practices to the Federal Trade Commission. At no point during the show did Doocy ask Pai about an investigation spearheaded by New York Attorney General Eric Schneiderman, which uncovered what Schneiderman called “a massive scheme” to flood the FCC with anti-regulatory comments supportive of dismantling net neutrality using personal information stolen from thousands of American citizens.

Pai’s move to gut net neutrality, which TV morning shows barely covered as the news broke, is not the first time the chairman has used the FCC to fulfill the demands of media outlets that have a direct line to the White House. In February, Pai imposed unnecessary cuts to an extension of the Lifeline program (which Fox News and host Sean Hannity assailed for years as so-called “Obamaphones”) that provided internet subsidies to qualifying low-income Americans. In April, he moved to ease merger restrictions that could materially benefit Trump-aligned Fox News and Sinclair Broadcast Group, and in the months since, the commission has made several additional changes to FCC rules that directly aid Sinclair’s conservative local news takeover.