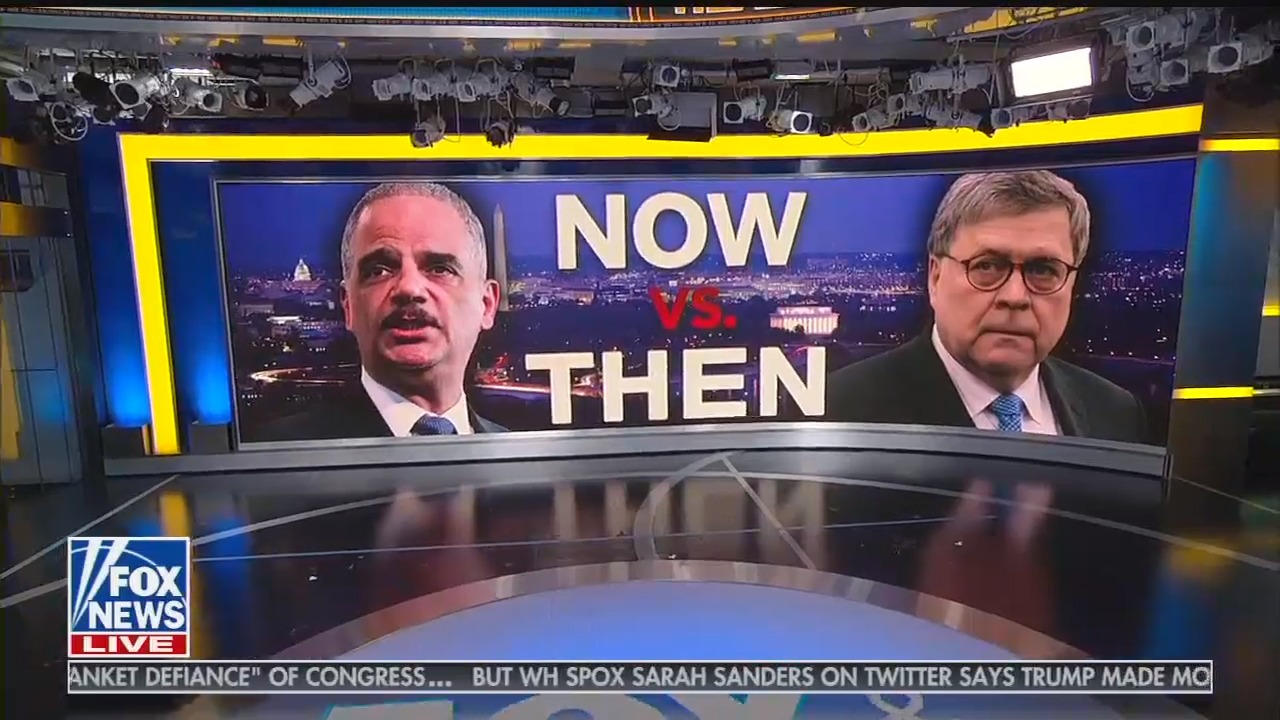 After the House Judiciary Committee recently voted to hold Attorney General William Barr in contempt of Congress for refusing to turn over the unredacted report by special counsel Robert Mueller on Russian election interference, Fox & Friends falsely equated the situation to House Republicans' 2012 contempt vote against former Attorney General Eric Holder. But Holder had attempted to satisfy Congress’ overly broad subpoena requests, including with document production, in contrast with Barr.

The House Judiciary Committee voted to hold Barr in contempt on May 8 after Barr defied a subpoena, his latest action stymying Congress’ look into the results of Mueller’s investigation. After receiving the report from Mueller, Barr went to great lengths to pre-spin the results -- spin that Mueller himself complained to Barr “did not fully capture the context, nature, and substance” of the report. Barr missed the House’s first deadline to turn over the full Mueller report by April 2 and two weeks later gave Congress only the redacted report that was also released to the public. In a letter, Barr informed the chairs of the Senate and House judiciary committees that he would provide a “less-redacted” version of the Mueller report only to the chairs and ranking members of those committees and the “Gang of Eight.” The House Judiciary Committee issued a subpoena for the full, unredacted Mueller report and underlying materials on April 19. On May 2, Barr also refused to testify to the Democratic-controlled House Judiciary Committee about the Mueller report, citing his objection to the plan to have lawyers ask questions.

Barr’s repeated attempts to frustrate Congress’ access to the findings of the Mueller report are in stark contrast with how Holder attempted to comply with Republicans’ congressional subpoena about an ATF operation in 2011. The deputy attorney general at the time explained to Congress the “extraordinary lengths” the Department of Justice went to in an attempt satisfy the Republicans’ subpoena. According to the DOJ, it had satisfied the vast majority of the subpoena’s questions before their June 2012 contempt vote. And the Obama White House explained in 2012 that the DOJ had produced thousands of documents and testified at 11 congressional hearings.

But in its May 9 discussion of the contempt vote against Barr, Fox & Friends ignored this disparity between Holder’s attempts to cooperate with congressional investigations and Barr’s outright obstruction.

STEVE DOOCY (CO-HOST): Let’s talk a little bit about what happened yesterday in the House of Representatives. House Judiciary Committee voted to hold the attorney general of the United States, William Barr, in contempt of Congress. It now goes to the full House.

DOOCY: Remember when Eric Holder was held in contempt by the full House back in 2012? Listen to some members of the media, what they were talking about regarding Eric Holder and Fast and Furious. He refused documents as well. But, the media back in 2012 sounds exactly like a lot of Republicans today.

BRIAN KILMEADE (CO-HOST): So is it amazing to you that the same people with mildly different hairstyles have taken the opposite position four years later?

AINSLEY EARHARDT (CO-HOST): When it was Holder, how could they? Adam Schiff said this is partisan abuse. You know what he is saying now with Barr? What he said yesterday? We had no choice.