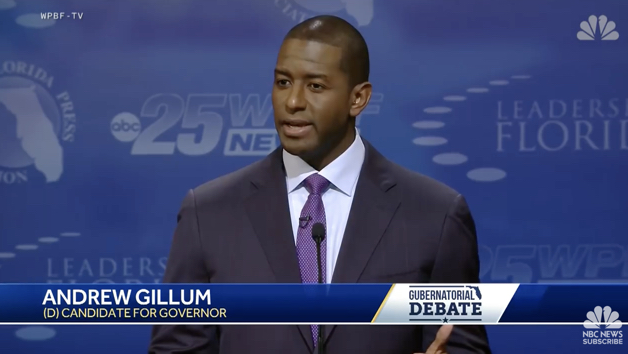 President Donald Trump recently called Florida Democratic gubernatorial nominee Andrew Gillum a “thief” on Twitter. Two days later, Fox News tried to make the case for the president’s baseless allegation by claiming in an article that Gillum, the mayor of Tallahassee, FL, “may have broken state law by using city funds for a private round-trip flight on a developer's plane to meet campaign donors” in 2016, adding that Gillum may be guilty of “a misdemeanor punishable by up to a year in jail.”

Either Fox News is clueless about Florida law or the network is choosing to intentionally promote a smear against Gillum.

Here is what happened: On February 12, 2016, Gillum took a round trip from Tallahassee to St. Pete-Clearwater International Airport on a private plane. The mayor’s expense account subsequently reimbursed the plane owner for $400. During the trip, Gillum met with Peter Leach, an affordable-housing developer, “to discuss affordable housing” (i.e. city business), according to the Tampa Bay Times. Afterward, as the Times reported, “Leach also hosted a ‘meet and greet’ with area bigwigs, including former [Florida chief financial officer] Alex Sink and former Gov. Charlie Crist” that Gillum attended. Fox News is alleging that the second meeting may indicate criminal misuse of public funds because at the time of the trip, Gillum may have been considering running for governor and thus it would have been advantageous for him to court those individuals. (Gillum announced his run for governor more than a year later in March 2017.)

Florida media reported on the trip in 2017, but it is now back in the news after GOP-connected Tallahassee lawyer Chris Kise released additional emails related to the visit. However, Tampa Bay Times reports, “The records provide little new information beyond what was first reported by Tallahassee Reports last year and followed up in a subsequent Tallahassee Democrat story.”

Did Gillum commit a crime? Absolutely not. An individual who wins a Florida mayoral election can transfer money that wasn’t used during the campaign into an office account. Gillum transferred $8,994 from his 2014 mayoral campaign to such an account, $400 of which was used to pay for the airfare for the February 2016 trip. Florida law says money in a mayor’s office account can be used “only for legitimate expenses in connection with the candidate’s public office.” And according to the Tallahassee Democrat, “What constitutes a legitimate expense is left up to the elected official, according to several opinions issued by the Florida Division of Elections over the years.” Ergo, no law was broken under any reasonable interpretation of Florida Division of Elections guidance.

You won’t find these facts in the breathless Fox News article about the 2016 trip. In the October 31 piece, Fox News editor Gregg Re suggested Gillum committed a crime that could land him in jail, writing that emails released about the trip mark “the latest headache for Gillum” and that “top Republicans immediately pointed to Gillum's' (sic) increasing finance woes.” According to Re, “The mounting charges against Gillum led President Trump to call him a ‘stone-cold thief’ in an exclusive interview Monday.”

Trump’s favorite morning news show, Fox & Friends, subsequently promoted Re’s article during the November 1 broadcast, with co-host Brian Kilmeade commenting that if Gillum “didn’t have that great charisma and presence, I would think that someone with this type of background would have fallen flat on his face by now.”

Fox News presented its story as a straight news report about the 2018 elections, but as usual the network is just functioning more as an oppo dump for Republican Party candidates.