Right-wing media, pro-Trump internet trolls, and fake news purveyors are boosting a report from a right-leaning journalist in a way that suggests former FBI Director James Comey might have intentionally leaked classified information to The New York Times. The report presents already-known information about Comey’s memos that recounted his interactions with President Donald Trump. Politico also reported that the source that passed along the memo to the Times confirmed that it did not contain classified information. 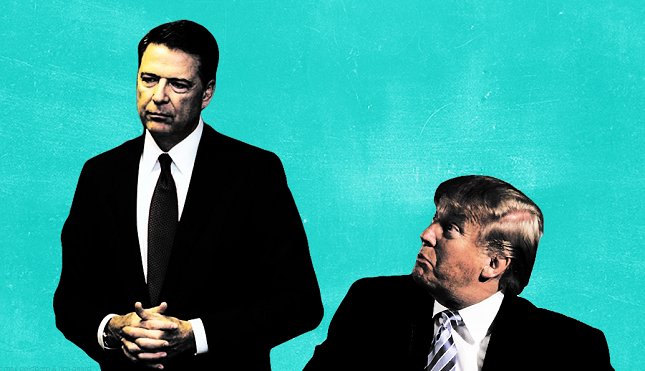 John Solomon in The Hill: Comey’s memos “contain classified information.” John Solomon formerly of Circa wrote in The Hill that four of the seven memos that Comey wrote to record his conversations with Trump “had markings making clear they contained information classified at the secret or confidential level, according to officials directly familiar with the matter.” The article pointed out that “the Comey memos have been previously reported,” but “this is the first time there has been a number connected to the amount of memos the ex-FBI chief wrote.” From the July 9 report:

More than half of the memos former FBI Director James Comey wrote as personal recollections of his conversations with President Trump about the Russia investigation have been determined to contain classified information, according to interviews with officials familiar with the documents.

This revelation raises the possibility that Comey broke his own agency’s rules and ignored the same security protocol that he publicly criticized Hillary Clinton over in the waning days of the 2016 presidential election.

Comey insisted in his testimony he believed his personal memos were unclassified, though he hinted one or two documents he created might have been contained classified information.

While the Comey memos have been previously reported, this is the first time there has been a number connected to the amount of memos the ex-FBI chief wrote. Four of the memos had markings making clear they contained information classified at the secret or confidential level, according to officials directly familiar with the matter. [The Hill, 7/9/17]

A number of right-wing outlets quickly reported on The Hill article, hyping it as a “revelation” that could suggest leaking of classified information on the part of Comey. The Daily Caller, The Gateway Pundit, Washington Free Beacon, Hot Air, Townhall, InfoWars, Breitbart, New York Post, and RedState all reported on it. Fringe internet trolls also boosted the story, and fake news purveyors quickly followed suit. Fox News’ chief intelligence correspondent Catherine Herridge reported that “a legal source close to the matter tells Fox News at least some of the material is considered law enforcement sensitive or possibly classified. The Hill newspaper reports some records documenting those nine conversations with the president were marked secret or the lower level classification known as confidential.” Trump’s favorite morning news show, Fox & Friends, reported on the story multiple times throughout the three hours the show aired. The story was also tweeted through the show’s Twitter account, which Trump retweeted. 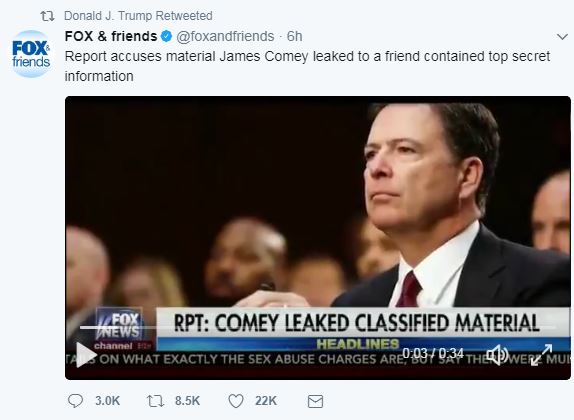 It’s true that “the former FBI director’s personal memos detailing private conversations with President Trump contained … secret information,” as the Fox report summarizes, though not, apparently, top secret material. (The levels of classifications go “confidential,” “secret” and then “top secret.”) But the wording on that Fox report is misleading. The memos contained classified information is true when considering the memos as a group. It is not true, though, that each memo contained classified information — or, at least, it’s not true that each memo was marked as being classified.

This issue came up during Comey’s June testimony, at which point Comey made clear that the memo he gave to his friend to leak, documenting a meeting on Feb. 14 of this year, was not one that included classified material.

He also during that testimony indicated that the same didn’t hold true for all of the memos he wrote. [The Washington Post, 7/10/17]

Politico: Comey’s friend who described the memo to The New York Times says it was not classified. Comey’s friend who revealed the content of his memo to The New York Times told Politico that the document “has never to my knowledge been classified,” confirming what Comey said in the June 8 hearing in front of the Senate Intelligence Committee. Politico published this information as an update to a previous story reporting that, according to one source, some of the memos had been “retroactively classified” but at least one memo remains unclassified. Comey had also testified on June 8 that he had written the memo the contents of which were eventually disclosed to the Times in a way that would not “trigger a classification.” From the July 10 Politico article:

A close friend of former FBI director James Comey — who helped reveal Comey's uncomfortable Oval Office interactions with the president — says the memo he described to the New York Times chronicling the encounter “has never to my knowledge been classified.”

“Jim Comey never gave me a memo that was classified; and the memo whose substance I passed on the Times has never to my knowledge been classified,” Daniel Richman, a longtime adviser to Comey and a Columbia University law professor, told POLITICO.

Whether that particular memo has been retroactively classified will be a key question as Comey faces attacks from President Donald Trump and his supporters, who are now accusing him of mishandling classified information. At least one of Comey’s memos remains unclassified, the source with knowledge told POLITICO.

The Hill newspaper first reported that some of Comey's memos have been determined to contain classified information. Comey acknowledged in testimony last month before Congress that some of the memos were about classified conversations, but he said the memo about Flynn was specifically written in a way that would not “trigger a classification.”

As FBI director, Comey would have been the agency’s original classification authority, giving him control over which of the agency’s records were classified and which were not. Benjamin Wittes, editor of the Lawfare blog and a friend of Comey’s, defended the former FBI director on Twitter Monday, and argued against Trump’s claim that Comey leaked classified information. [Politico, 7/10/17]

Solomon is one of Sean Hannity’s main sources for pushback against accusations of the Trump campaign’s possible collusion with Russian officials. Solomon has appeared on Sean Hannity’s Fox News television program “four times in June and four in May,” according to Nieman Lab. Hannity frequently cites Solomon’s reports to tamp down accusations of the Trump campaign’s possible collusion with Russia during the 2016 presidential election or the administration’s general improper behavior. On May 9, Hannity boosted one of Solomon’s reports to distract from fired national security adviser Michael Flynn’s contacts with Russian officials and instead hyped Trump’s claims that someone in former President Barack Obama’s administration unlawfully unmasked Flynn. [Nieman Lab, 7/5/17; Media Matters, 5/9/17]

Solomon’s former publication, Circa, is owned by Sinclair Broadcast Group, which may have made an agreement with the Trump campaign for “straighter coverage.” Politico reported that Sinclair Broadcast Group, which owns the publication for which Solomon formerly reported, “struck a deal” with the Trump campaign in which Sinclair affiliates “would broadcast [Sinclair’s] Trump interviews across the country without commentary” in exchange for more access to then-presidential candidate Trump. [Politico, 12/16/16]

UPDATE: Fox & Friends offered a correction to their original segment, tweeting that “Comey’s memos did not have top secret info.” Fox & Friends said they will address their erroneous report on Tuesday morning.

Correction: Comey's memos did not have top secret info. The report says half were classified at secret or confidential level, not top secret