Less than one day after a gunman opened fire at a California food festival, killing three people and injuring at least 12 others, conservative media ran with the tired and false claim that the festival was a “gun-free zone” because event attendees were prohibited from bringing guns and other weapons. In reality, the event reportedly had “very tight” security including armed police officers who were able to engage and neutralize the gunman in less than a minute. Despite the popularity of the pro-gun “good guy with a gun” myth, civilian gun owners typically do not take down mass shooters and can actually contribute to the overall chaos. 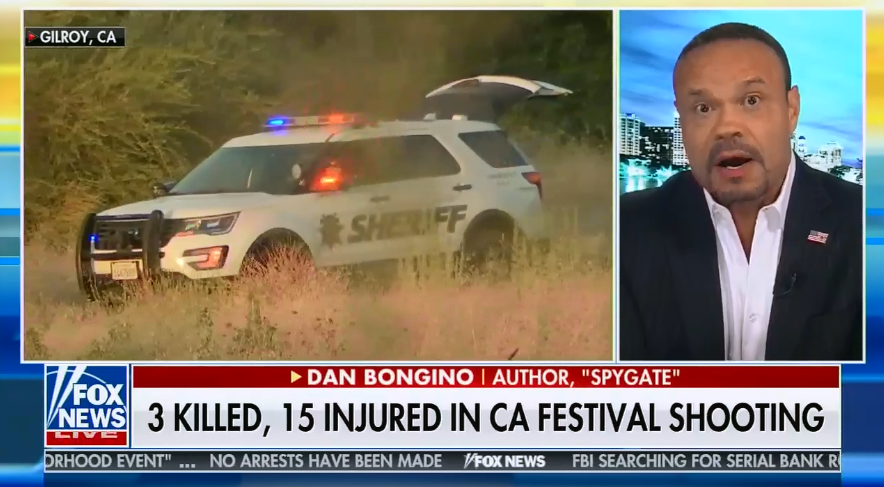 Gunman opened fire at a popular food festival, killing three including a 6-year-old boy. On July 28, a gunman “carrying an assault-style rifle” began shooting at the annual three-day Gilroy Garlic Festival in California. The shooter reportedly “crossed a bordering creek and cut a perimeter fence” to gain entry into the festival. Local police responded and stopped the shooter within one minute, but authorities are reportedly still searching for a possible second suspect who may have aided the gunman.

At least three people were killed and 12 more were injured in a shooting at a garlic festival in Gilroy, Calif., on Sunday, the authorities said.

A suspect carrying an assault-style rifle was fatally shot by the Gilroy police, the city administrator, Gabriel Gonzalez, said in a statement. Late Sunday evening, the police were continuing to search for a possible accomplice in Gilroy, which is about 30 miles southeast of San Jose.

“We believe based on witness statements that there was a second individual involved in some way, we just don’t know in what way,” Chief Scot Smithee of the Police Department said at a news conference.

A six-year-old boy who had been playing at an inflatable bounce house was among those killed, his father told local news outlets. [The New York Times, 7/28/19]

Police inside the festival responded within one minute

Gilroy law enforcement confirm there was a large armed police presence inside the festival. According to local reports, police officers were stationed “at the festival” and engaged the gunman in less than a minute after he opened fire. Gilroy Police Chief Scot Smithee said security at the festival was “very tight.”

The first reports of gunshots at the festival came in around 5:41 p.m. local time, just as the event was wrapping up, Smithee said. He added that officers already stationed at the festival “engaged the suspect in less than a minute.” More than a dozen ambulances and firetrucks were also dispatched to the scene located about 30 miles southeast of San Jose, according to the San Francisco Chronicle.

The shooter was carrying an “assault-type rifle,” the City of Gilroy said in a statement early Monday. Investigators believe the suspect entered the festival by cutting through a perimeter fence, Smithee told reporters. He noted that security at the festival’s official entrances is “very tight,” despite a lack of posted security cameras. In addition to a police presence, attendees are subject to bag searches and metal detector wands, he said. [The Washington Post, 7/29/19]

Dallas police chief explained how a “good guy with a gun” adds to the chaos. During a July 2016 press conference following a mass shooting in Dallas, TX, police chief David Brown explained that when “people have AR-15s slung over and shootings occur in a crowd, … we don’t know if they’re the shooter or not.” Brown went on to say that if civilians start shooting in response to a gunman during a mass shooting situation, “we don’t know who the good guy is versus who the bad guy is”:

REPORTER: We know that there was at least one gentleman who was a subject -- person of interest, during the demonstration he had an AR-15 around his -- around his shoulder. What does this tell you about people using the new Texas law of open carry at a demonstration like this?

DAVID BROWN (DALLAS POLICE CHIEF): That it's difficult at best. We expressed this, it's a little different here in Texas. Where are you from?

BROWN: You're from Texas? Oh, you know. All right, so, it's a little different here in Texas in the way we view open carry, concealed carry. We've had great dialogue with our state legislators about this. We've expressed all of our concerns. We are trying as best as we can as a law enforcement community to make it work so the citizens can express their Second Amendment rights. But it's increasingly challenging when people have AR-15s slung over and shootings occur in a crowd and they begin running, and we don't know -- or we don't know if they're the shooter or not, or they begin, it's been the presumption that a good guy with a gun is the best way to resolve some of these things. Well, we don't know who the good guy is versus who the bad guy is if everybody starts shooting, and we've expressed that concern as well. I have every belief and trust that our folks are listening at the state on this issue, particularly as it involves protests, particularly as it involves protest. [Media Matters, 7/11/16]

Conservative pro-gun media spread false claim that the festival was a “gun-free zone.”

Fox’s Dan Bongino: “Gun-free zones are inherently dangerous.” During the July 29 edition of Fox News’ Fox & Friends, contributor Dan Bongino said that a security lesson from the Gilroy shooting is that “gun-free zones are inherently dangerous” because “you’re guaranteeing yourself an unarmed target base where people can’t shoot back.” The Fox News contributor, who previously worked for the National Rifle Association’s now defunct media operation NRATV, then seemingly contradicted himself by acknowledging that armed police “were present to engage and stop this maniac.”

STEVE DOOCY (CO-HOST): These images out of California are so troubling. It was a soft target to start with. It doesn't sound like security was too -- it wasn't like going to the airport because they didn't apparently check everybody's bags. But this guy wasn't even going to chance that. He just cut a hole in the fence in the back and snuck in.

DAN BONGINO (FOX NEWS CONTRIBUTOR): Sure. And first, I would like to salute those brave police officers. You know, when those problems start, they're the only ones running towards it. And I think everybody needs to remember that on days like today. This is what our cops do. You know, they don't get paid to give traffic tickets. They’re getting paid, but they get paid because one day, they may be the ones facing down a gunman like they did, so a salute to them. Yeah, there are a couple of takeaways here, Steve. The first one is you know, you're only as good as the patrol on your perimeter. You know perimeters, whatever they may be, a fence -- we used to use pipe and drape in the Secret Service which is literally just a piece of fabric. They’re obstructions but they're not designed to be foolproof. You have to have someone actually watching them because this is the kind of thing that can happen. You can breach them very easily or you can just -- with a fence, you can climb right over. That principle applies pretty much everywhere. Secondly, you know gun-free zones are inherently dangerous. I've been calling these out for a long time now on this network. You're guaranteeing yourself an unarmed target base here where people can't fire back. Thank God those police officers were present to engage and stop this maniac before it got worse than it did. [Fox News, Fox & Friends, 7/29/19]

Breitbart: “The festival prohibited ‘weapons of any kind.’” In a July 29 article, Breitbart “Second Amendment columnist” AWR Hawkins claimed there were no “weapons of any kind” permitted in the festival and falsely stated the country saw “similar gun-free zone shooting” incidents in Virginia Beach, VA, Parkland, FL, and Orlando, FL .

As gun-control advocates seize the Gilroy Garlic Festival shooting to justify even more gun control it should be noted that the festival prohibited “weapons of any kind.”

In other words, the festival had 100 percent gun control as far as it related to law-abiding citizens.

The festival was held in Christmas Hill Park where the possession of “pocketknives and weapons of any kind” are clearly prohibited. Moreover, a perusal of the city of Gilroy’s “Park Rules and Regulations” unambiguously states that “guns, slingshots, or fireworks” are prohibited.

Early reports coming over the news channels on the Gilroy Garlic Festival shooting are all over the place, with eyewitness claims of machine-guns, multiple active shooters, 100 of bullets whizzing by heads, etc. All the typical hysteria we see in the first reports of any tragic mass shooting.

Early Police reports are that as many as 11 people were injured and three people are dead, in a shooting Sunday at the Gilroy Garlic Festival in Northern California.

The anti-gun Brady Center for Gun Control ranks California number one (#1) for having the “strongest” (read most oppressive) gun laws that help keep guns out of the hands of lawful U.S citizens. [Ammoland.com, 7/28/19]

However, since the usual suspects are already making this about gun control, here are a few things that we do know.

Second, while anti-gunners are going on about gun control, let’s keep in mind that this is California. This is the most anti-gun state in the country. This is a state that doesn’t seem to dislike any anti-gun proposal. Yet if gun control works so well, then just how in the hell did this happen?

The truth of the matter is that right now, we don’t know anything. We don’t know who the shooter was, how many shooters (some say there were two, after all), or anything like that, much less how they got their gun or even what kind of gun, though early reports are that it was some kind of “assault rifle.” We simply don’t know much of anything right now. [BearingArms.com, 7/29/19]