Right-wing media figures spread a hoax after an anonymous 4chan poster claimed without evidence to have duped lawyer Michael Avenatti about the existence of a third woman willing to come forward to report Supreme Court nominee Brett Kavanaugh for sexual misconduct. The woman in question, Julie Swetnick, has now come forward with a sworn declaration.

On Tuesday morning, an anonymous 4chan user claimed in a now-archived thread to have duped Avenatti by having someone impersonate a woman with knowledge of unreported instances of Kavanaugh’s alleged sexual misconduct. 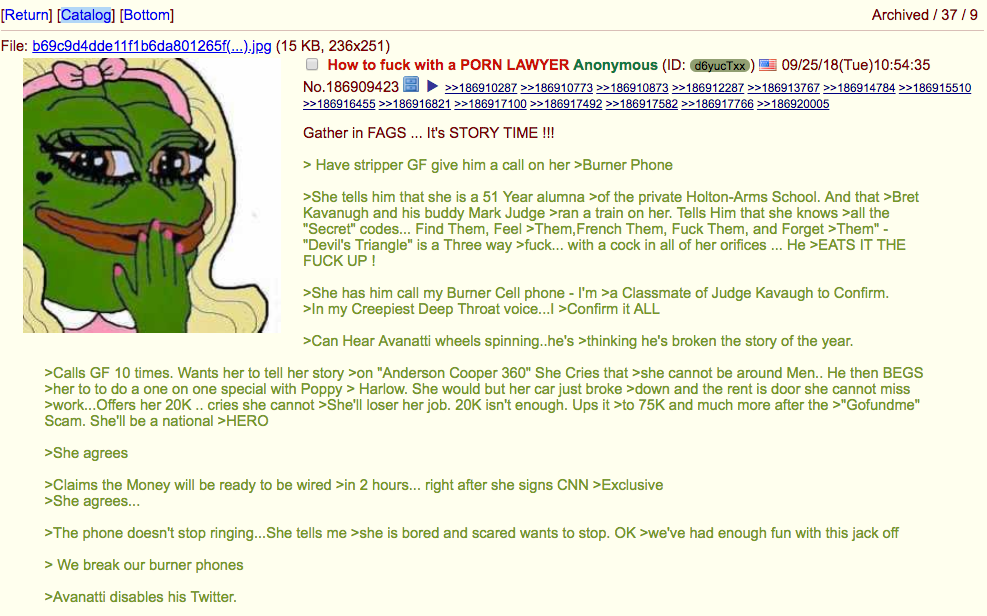 It didn’t take long for influential right-wing media personalities to run with this baseless claim, in efforts to preemptively smear any source of new allegations against Kavanaugh. Conservative talk radio host Erick Erickson -- for whom no conspiracy theory is far-fetched enough if it discredits women with reports against Kavanaugh -- quickly helped advance the 4chan narrative, first retweeting a screenshot and then irresponsibly parroting it: 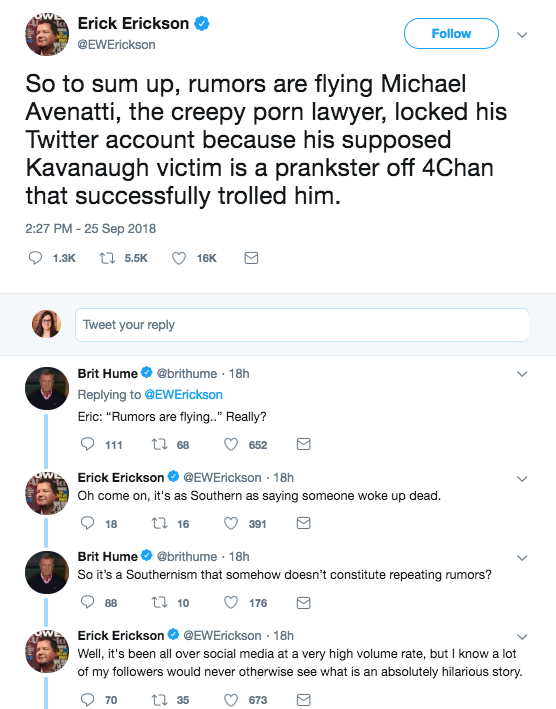 Erickson was not alone in spreading misinformation anonymously posted in a message board known for generating hoaxes. He was joined on Twitter by FoxNews.com commentator Stephen Miller, the widely-followed right-wing Twitter account Instapundit.com, and One America News Network correspondent and “Pizzagate” pusher Jack Posobiec.

Red State also jumped on the bandwagon, speculating in its report that the false narrative could be “one of the greatest events in 2018.” And on the September 26 edition of Fox & Friends, host Brian Kilmeade also alluded to the fake narrative concocted by 4chan trolls, falsely claiming Avenatti had admitted to being fooled:

Later on the show, Kilmeade clarified that Avenatti had denied having been duped.

Avenatti has now made publicly available a sworn declaration signed by a woman named Julie Swetnick. As legal commentators have pointed out, Swetnick’s sworn declaration was made under penalty of perjury, adding further weight to her report. The entire incident also shows how low right-wing media figures will stoop to discredit and dismiss women coming forward with potential reports against Kavanaugh. Clearly, if a narrative could potentially smear survivors or discredit sexual misconduct allegations, taking 4chan posts at face value isn’t low enough for right-wing media.