I’m writing this post about the upcoming midterm elections on November 6th, in which I’ll be voting in the state of Tennessee. In the past I’ve been reluctant to publicly voice my political opinions, but due to several events in my life and in the world in the past two years, I feel very differently about that now. I always have and always will cast my vote based on which candidate will protect and fight for the human rights I believe we all deserve in this country. I believe in the fight for LGBTQ rights, and that any form of discrimination based on sexual orientation or gender is WRONG. I believe that the systemic racism we still see in this country towards people of color is terrifying, sickening and prevalent. I cannot vote for someone who will not be willing to fight for dignity for ALL Americans, no matter their skin color, gender or who they love. Running for Senate in the state of Tennessee is a woman named Marsha Blackburn. As much as I have in the past and would like to continue voting for women in office, I cannot support Marsha Blackburn. Her voting record in Congress appalls and terrifies me. She voted against equal pay for women. She voted against the Reauthorization of the Violence Against Women Act, which attempts to protect women from domestic violence, stalking, and date rape. She believes businesses have a right to refuse service to gay couples. She also believes they should not have the right to marry. These are not MY Tennessee values. I will be voting for Phil Bredesen for Senate and Jim Cooper for House of Representatives. Please, please educate yourself on the candidates running in your state and vote based on who most closely represents your values. For a lot of us, we may never find a candidate or party with whom we agree 100% on every issue, but we have to vote anyway. So many intelligent, thoughtful, self-possessed people have turned 18 in the past two years and now have the right and privilege to make their vote count. But first you need to register, which is quick and easy to do. October 9th is the LAST DAY to register to vote in the state of TN. Go to vote.org and you can find all the info. Happy Voting! 🗳😃🌈

Since the 2016 presidential election, Swift has been a hot topic on 4chan, the anonymous message board known for its far-right extremism. Users there had interpreted her silence around the election and her country music roots as revealing an alignment with white supremacist values and a rejection of social justice, earning her the nickname “Aryan goddess.”

But then Swift endorsed Bredesen and fellow Tennessee Democrat Rep. Jim Cooper on Instagram, and the number of posts about her in the “politically incorrect” board of 4chan skyrocketed. Users reacted with sexist and dehumanizing slurs and suggestions that she was no longer “/our girl/.” [Trolls on 4chan habitually call those who they believe to represent their values “/our guy/” or “/our girl/” -- currently, those figures include Tucker Carlson and actress Roseanne Barr.] 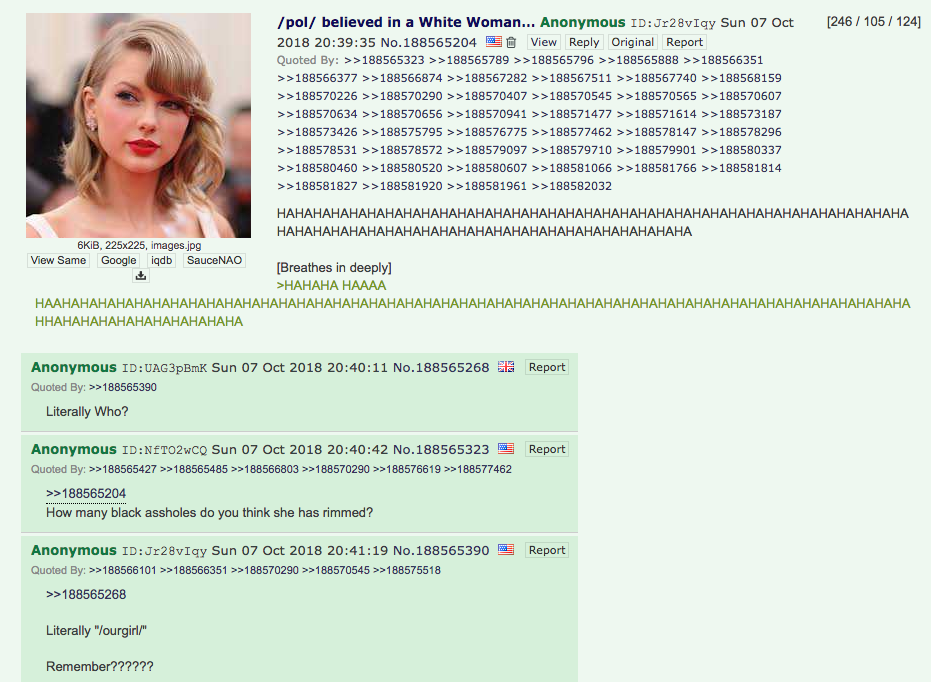 And one take was consistent among the trolls: the sexist and demeaning assumption that a woman cannot form her own political opinions.

nazis on 4chan starting to suggest that someone wrote Taylor Swift's endorsement for her pic.twitter.com/mBfcklt3Ao

Turning Point USA Executive Director Charlie Kirk, who had a Twitter meltdown about Swift’s endorsement and repeatedly accused her of having “no idea” of what she was talking about, took it upon himself to go on the October 8 edition of Fox & Friends and amplify the sexist conspiracy theory that trolls had posted on 4chan.

Charlie Kirk: I don't want to accuse her of this, but I don't think she's the only one who wrote that post on Instagram. She probably got some very bad information." pic.twitter.com/CqMjTkKdJ0

Kirk also took his disappointment and the asinine conspiracy theory that Swift could not have written her own campaign endorsement to Fox Business’ Varney & Co., where he claimed that she had been “co-opted by activists on the left that want to use her brand, her visibility, and popularity to advance their agenda.”

Both Kirk and TPUSA’s communications director, Candace Owens, had previously expressed disdain for celebrity opinions, but that changed after Kanye West praised Owens. At that point, Kirk made public appearances with West, Owens did media hits with him, and Kirk offered unending sycophancy for the rapper, all of which shows they actually care a lot about what celebrities think -- as long as they support President Donald Trump.