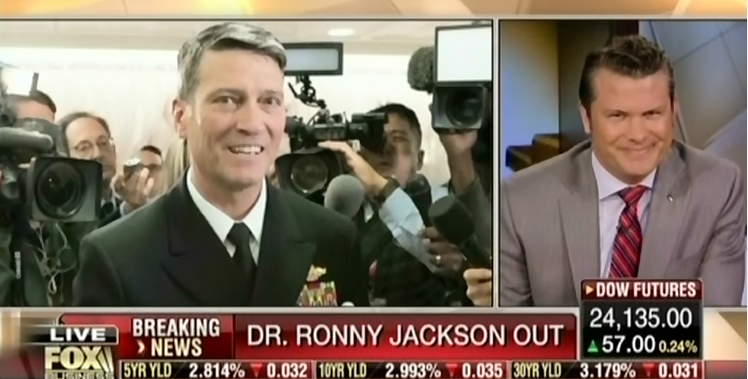 Hegseth has long been considered a possible choice to serve as VA secretary in the Trump administration. He met the president multiple times after the 2016 elections to discuss the possibility of his nomination. Even after Trump chose David Shulkin as his new secretary, the president still reportedly called Hegseth during a meeting with Shulkin to ask his opinion about reforming the VA system.

Today, while discussing the news of Jackson’s withdrawal, Bartiromo turned to Hegseth and asked if he “would want the job.” From the April 26 edition of Fox Business’ Mornings with Maria Bartiromo:

BARTIROMO: -- and they want chaos around him. Your name has been floated out there.

HEGSETH: Yeah, it has.

BARTIROMO: Would you want the job?

HEGSETH: Well, listen, if the president asks me to serve, great. But he hasn't until this point, so we'll see.

GIANNO CALDWELL (FOX NEWS POLITICAL ANALYST): I’m sad to see [Jackson] go, but I know that there’s some other good people that can step in his place. I think an excellent candidate would be Pete [Hegseth] to be the new VA secretary, so --