Extreme anti-LGBTQ group the Family Research Council (FRC) brought American College of Pediatricians (ACPeds) Executive Director Michelle Cretella and ex-trans activist Walt Heyer to meet with members of Congress to advocate against the Equality Act within a day of the bill’s introduction on March 13. The bill would add “sexual orientation” and “gender identity” to existing civil rights nondiscrimination protections.

While there is limited information available on the substance of these congressional meetings, FRC’s public discussions with Cretella and Heyer around the time of the meetings pushed the debunked myth that trans-inclusive policies threaten the safety of women and girls and promoted an unvalidated hypothesis that transgender youth are coming out as a fad.

In appearances around the lawmaker meetings, FRC and ACPeds pushed anti-trans myths

In the day after the introduction of the Equality Act, Cretella participated in two interviews with FRC to discuss their shared opposition to the bill and to promote anti-trans policies. During those interviews, Cretella and FRC leaders acknowledged that they met with members of Congress and their staffs to discuss the bill.

Outside of those appearances, FRC has not published materials about the meetings, so there is little information on which lawmakers the groups met with or what they discussed. On March 13, Sen. Ted Cruz (R-TX) tweeted a picture with FRC President Tony Perkins, writing that the two discussed the work of the U.S. Commission on International Religious Freedom (for which Perkins is a commissioner). 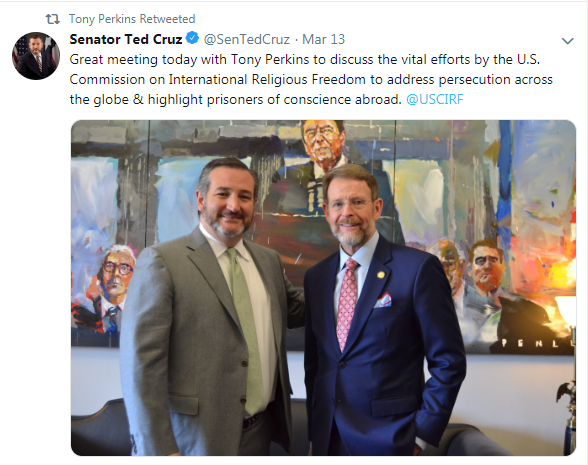 During the March 14 edition of Perkins’ podcast, he revealed that ACPeds joined FRC in meetings with members of Congress and their staffs to discuss anti-trans policies:

MICHELLE CRETELLA (ACPEDS EXECUTIVE DIRECTOR): You know, Tony, that is the foundational question, and the answer is gender dysphoria, transgender belief is in the mind. And what we are facing in medicine, and psychology -- and as you said, from pre-K to the halls of Congress -- is a top-down tyranny of -- It’s basically a cult. It’s a cult that is telling us that children are born with the belief that they are trapped in the wrong body, and it’s simply not true.

PERKINS: Now you joined us the other day on Capitol Hill for some briefings with lawmakers, and I -- you know, I deal with this stuff almost every day. But we can always learn, and I learned a lot from listening to you more about this where -- and you made some illustrations which I think are very important. When someone has anorexia or another type of situation that is really psychological, physiological, we treat it a certain way.

Perkins’ comments comparing transgender identities to having an eating disorder mirror talking points from the flawed concept of so-called rapid-onset gender dysphoria, an unvalidated hypothesis that suggests teenagers are coming out as trans due to “social contagion.” However, the original study that promoted the concept was re-evaluated following complaints about its research and methodology, and on March 19, the academic journal which published it issued a correction to note that the study only “serves to develop hypotheses” and that the concept has not been validated.

In addition to Perkins’ interview, FRC senior fellow Peter Sprigg also interviewed Cretella and Heyer in a Facebook video on March 14. During the interview, Sprigg acknowledged the Capitol Hill meetings, and Cretella falsely claimed that being trans is comparable to having anorexia. She also falsely claimed that trans-inclusive policies threaten the safety of women, a myth that has been repeatedly debunked. From the March 14 video:

PETER SPRIGG (FRC SENIOR FELLOW): I want to move on to now to some of the policy issues, public policy issues, and you’ve been gracious enough to share on Capitol Hill today with members of Congress and their staffs who are considering a number of pieces of legislation that would make gender identity into a protected category under civil rights laws, notably one called the Equality Act, which would include sexual orientation and gender identity as protected categories.

Dr. Cretella, I wanted to ask you about one of the issues that has come up with respect to gender identity protections in public accommodation laws, which is: What does this do for the privacy and safety of women and girls?

MICHELLE CRETELLA: Sure. You can’t -- if we protect gender identity as if it were a trait like sex, you eliminate girl and women rights. There are no women’s rights. Why? Because any man, any boy can simply proclaim, “I’m a girl.” All you have to do is say it. Being transgender -- OK, transgender people are real in the same sex that anorexic people are real. An anorexic person is a man or a woman who has anorexia, which is an emotional or mental disorder. Transgender people are a man or a woman, men or women, who have a disorder. So in public accomodations, if we protect gender identity, any man can walk into a woman’s restroom. Any man can walk into a women’s locker room, a women’s domestic shelter, homeless shelter, a -- women’s prisons, they can be housed with the women.

Women and girls’ safety goes out the window, and this is not a bigoted statement. It is reality. Women have fallen prey to male violence for eons. It’s just a fact. It’s a biological fact that men are bigger, taller, stronger, faster. That’s biology, and that is why we’ve always protected women’s spaces and women’s sports.

Extreme anti-LGBTQ groups such as FRC regularly tout ACPeds as an expert source on scientific and medical issues related to LGBTQ people despite the fact that it is a discredited, partisan organization.

ACPeds is a small and extreme anti-LGBTQ group of physicians that broke off from the legitimate American Association of Pediatrics (AAP) after it began supporting the right of same-sex couples to adopt children and provide foster care. While AAP is a professional organization of 67,000 pediatricians, ACPeds reportedly has only a few hundred members. Cretella and ACPeds have worked for years to discredit trans-affirming science, and right-wing media and anti-LGBTQ groups have elevated ACPeds’ bad science by presenting the group as a medical authority.

Right-wing media add to the false perception of ACPeds’ credibility by citing the group as an alternative to trans-affirming AAP guidelines and by using Cretella as a source to dispute trans-affirming care and other trans-inclusive policies. For example, in response to an Associated Press interview with the lead author of AAP’s transgender policy about the differences between sex and gender, the American Family Association’s outlet OneNewsNow quoted Cretella disputing AAP’s points and calling the author a “transgender activist.”

FRC in particular has given ACPeds a national platform to push anti-trans narratives for years, including hosting Cretella on a panel at its 2018 Values Voter Summit to compare affirming trans identities to “child abuse” with FRC’s Sprigg. In the last six months, Cretella has been on Perkins’ radio show at least three times to discuss the Equality Act, so-called rapid-onset gender dysphoria, and the Trump administration's anti-trans policies.

FRC and other anti-LGBTQ groups have increasing influence over the Trump administration’s policies and enjoy regular access to members of Congress. For instance, Perkins played a leading role in crafting the Trump administration’s ban on trans service members in the military, and he was appointed as a commissioner of the U.S. Commission on International Religious Freedom.