Whoopi Goldberg, the co-host of ABC’s The View, was the target of a fake quote circulating online claiming she used a racial epithet against Fox News host Jeanine Pirro. And it wasn’t the first such attack; Goldberg has become a prominent target of fake news and harassment.

On July 20, Twitter user Josh Cornett -- who previously created a fake quote targeting Senate Democratic leader Chuck Schumer (D-NY) -- tweeted that “sources at ABC” said Goldberg had told “co-host Ana Navarro” that she “won’t sit there and be lectured by Trump’s Sand Nig*er,” referring to Pirro, who had appeared on The View and sparred with Goldberg. 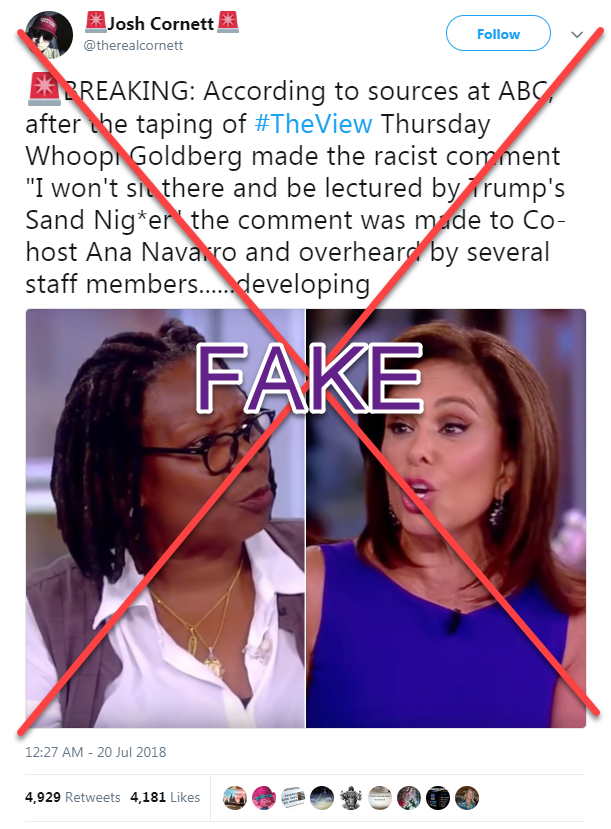 The quote, which ABC’s publicity director has said “absolutely is false,” has spread on Twitter, including from QAnon conspiracy theorists Michael Moates and Lisa Crowley, and on Facebook and message board 4chan. It was also pushed on air as real by North Dakota talk station KHND-AM, where a host said Goldberg has “no morals and no compass.” A petition was even launched calling for Goldberg’s firing based on the fake quote.

Since early 2017, Goldberg has become a regular target for fake stories like this one, smearing the host’s reputation:

These fake stories have taken their toll: Speaking on The View, Goldberg said the fake military widow story “endangered my family’s life and endangered my life.” When the fake Trump shirt image first appeared the following month, Goldberg was again forced to debunk it on The View, noting it was a photoshopped image of the shirt she actually wore to the Women’s March. And when the image was revived by Barr and others in May, Goldberg criticized Barr on The View and again explained that the image was fake.

These attacks on Goldberg come as studies from Pew Research Center have found that Black people and women have disproportionately been the target of online harassment. Another regular victim of fake news, Rep. Maxine Waters (D-CA), is also a Black woman.

There are signs that these fake stories are still spreading: A 4chan user shared the fake military widows quote meme in a July 23 thread about “Politically sound negroes,” writing, “Kill this one.” And though an incognito Google search for “whoopi trump shirt” shows debunks right below, it still brings up as the top result shirts from the fake image for sale from different sellers with labels such as “Whoopi Goldberg Trump shirt,” “Whoopi Trump Shirt Make America Great Again,” and “Whoopi Goldberg Make America Great Again Trump Shirt.”