UPDATE: On October 28, a post on the Facebook page America's Last Line Of Defense apologized for the post smearing La David Johnson and claimed that the “author ... decided to pull the story.” However, the article as of this update is still online.

Websites that have branded themselves as “satirical” or as intending to “prank” people are contributing to the problem of fake news spreading on social media and elsewhere online, as their articles are picked up by users and fake news purveyors who present the false content as real. Some of these supposedly satirical pieces have even been used to smear people, including fallen soldier Sgt. La David Johnson.

Throughout the last year, fact-checking organizations have been forced to debunk numerous stories posted on websites that carry a disclaimer that they are “satirical.” Often, fake news purveyors will share these websites’ stories as if they are real, such as when American News pushed a story from a satirical blog claiming a Navy destroyer hit a Houston building due to flooding caused by Hurricane Harvey. Some of these “satirical” stories have also been shared on social media as seemingly real.

Perhaps no figure has been more guilty of masking fabricated stories as “satire” than Christopher Blair, a man who runs multiple websites that are supposedly satirical: Freedum Junkshun, As American As Apple Pie, Our Land of the Free, and, most prominently, The Last Line Of Defense (also known as The Resistance: The Last Line of Defense, or LLOD for short). Throughout the past year, fact-checkers (and Media Matters) have been forced to rebut Blair’s stories so many times that PolitiFact wrote this summer, “If you're fooled by fake news, this man probably wrote it” above a picture of Blair. And indeed, according to the social media analytics service BuzzSumo, many of Blair’s made-up stories have been shared by fake news purveyors, including those from Macedonia, a major hub for fake news writers. Thousands have engaged with these stories on social media, where people often have interpreted them as true (including Fox News host Sean Hannity). Blair, speaking to PolitiFact, claimed his aim has been “to mess with conservatives.” Despite acknowledging that other websites presented his stories as real, he dubiously claimed that “the average person … immediately understands” his stories are not real.

Since the interview, Blair has used his websites to target and smear Muslims in multiple pieces, falsely claiming that a Muslim man started the California wildfires, that a fictional Georgia mosque diverted aid from Hurricane Harvey victims, and that a Muslim football team owner has ties to ISIS. In one case, LLOD used an image of a Toronto-based imam to falsely claim that a Houston mosque refused to help Harvey victims, and other fake news purveyors shared the piece, forcing the imam to rebut it on TV. Many of these stories were spread via other fake news purveyors and, when shared on social media, were often taken as true.

On October 25, Freedum Junkshun published a piece smearing La David Johnson, an American soldier killed in Niger, as a deserter. When LLOD’s Facebook page (called “America’s Last Line of Defense”) shared the article, a user commented, “If true his mother and that bitch from Florida owes President Trump an apology,” to which the LLOD account responded, “THAT'S THE SPIRIT!” In response to Blair’s rampant misinformation campaign, Facebook has blocked users from sharing links from LLOD. 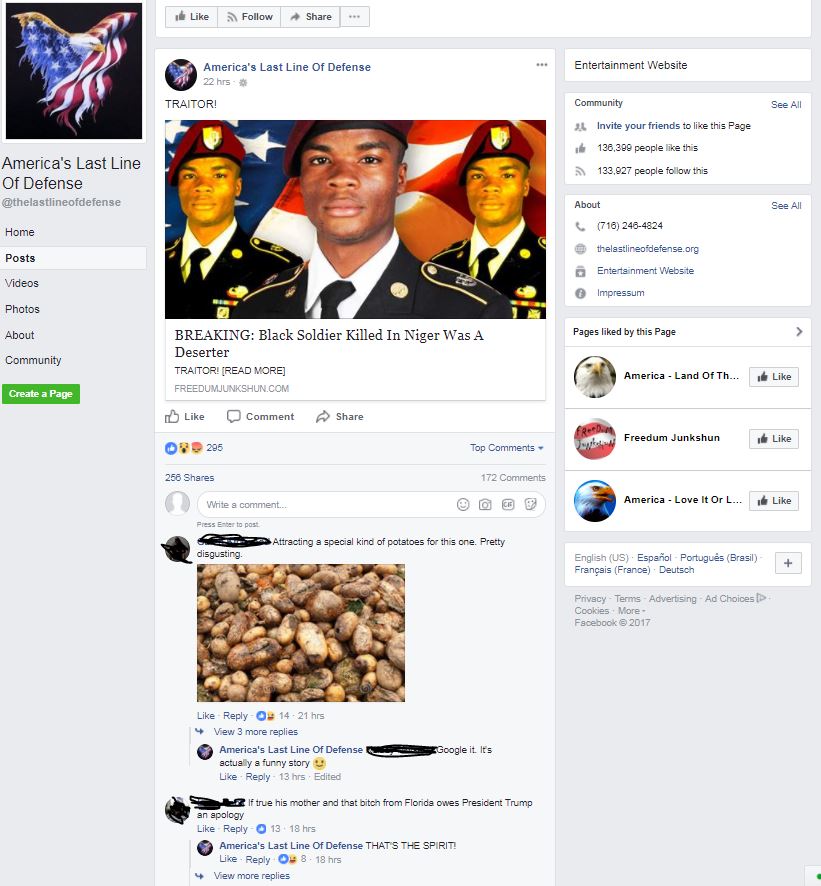 Fact-checkers this year have also been forced to rebut “prank” websites, which allow people to write their own stories and share them online. Even though these websites have disclaimers, their made-up stories have harmed the business of a London restaurant, fooled the Kentucky AFL-CIO, and tricked thousands of people into believing that the FBI had announced evidence of collusion between Russia and President Donald Trump’s 2016 campaign, among others. And in some of those cases, the stories were interpreted on social media to be real.

There is a role for satire in our public discourse. The Onion, for instance, has become a widely popular website that entertains many people, often while making interesting or thought-provoking points. But there is a difference between parody and deception, and websites like The Last Line of Defense too often engage in the latter. Indeed, Michelle Amazeen, an assistant professor of mass communication at Boston University, told Snopes that people don’t often note the disclaimers, and Dartmouth professor Brendan Nyhan has said that these websites seem “more like a way to make the other side look bad and/or make money while spreading misinformation" than like genuine satire.

And yet some who run the sites seem to be in denial. LLOD’s Facebook page attacked Snopes for writing a “hit piece” after it called out the Johnson article and quoted Blair as saying, “There are numerous quotes and posts our (sic) there covering my thoughts. Be a reporter and find them. I’m done giving interviews that turn into yet another article about what a jerk I am.” An LLOD writer told fact-checker Lead Stories that his site’s made-up stories were acceptable because of “multiple disclaimers” and said that “some blame needs to be assigned to the mouth-breathing, neanderthalic Trump fans who don't care about facts in the most literal sense.” But contrary to their defenses, these “satire” websites and writers are simply injecting more misinformation into society, and are complicit in spreading fake news.