The State Department last year named conspiracy theory website Global Research as a prominent outlet in the Russian “disinformation and propaganda ecosystem,” but the site and its content are still widely accessible across various social media platforms despite spreading misinformation about the COVID-19 pandemic and vaccines.

According to an August 2020 report issued by the Global Engagement Center at the State Department, Global Research is a “Canadian website that has become deeply enmeshed in Russia’s broader disinformation and propaganda ecosystem.” The site provides a “large roster of fringe authors and conspiracy theorists [that] serves as a talent pool for the Russian and Chinese websites with which Global Research has partnered since the early 2010s.” It also publishes articles that “provide a Western voice that other elements of the ecosystem can leverage to their advantage.” The report underscores the significance of Global Research, noting that since its founding in 2001, the site has been “a steady source of anti-U.S. and anti-Western disinformation and propaganda.”

As an illustration of how it operates in practice, Global Research frequently republishes fringe voices such as Florida osteopath Dr. Joseph Mercola’s anti-vaccine disinformation. Because the message comes from Mercola instead of a non-U.S. source, a Western audience is more likely to be receptive than it would be to original content created by foreign adversaries.

The dangerous intersection of disinformation and closed spaces, like Telegram channels and Facebook groups, could allow such adversaries to identify and target audiences with intentionally misleading or false content designed to exploit their vulnerabilities. In the past weeks alone, the website has amplified blatant fabrications about vaccines, speculated about whether the coronavirus exists, and claimed that leaked documents show vaccine manufacturers have nothing to lose if their product hurts people. Prominent anti-vaccine outlets and right-wing media figures, including multiple Fox News personalities, have promoted its content.

Today, Global Research maintains accounts on Instagram and YouTube, as well as what appears to be an alternate ban-evasion account on Twitter. On Facebook, users can still share and promote the website’s dangerously misleading content even though the site does not appear to have an active account. Allowing Global Research to persist on social media platforms means these companies are -- wittingly or unwittingly -- aiding a Kremlin-linked vector for hyperpartisan conspiracy theories and pandemic disinformation in reaching Americans.

While Global Research doesn’t have an active Facebook account due to what seems to be a previous ban (the account reportedly had at least 275,000 followers in October 2020), users can still share articles from its website and pieces from other outlets that cite Global Research’s claims.

Many Global Research articles circulated on Facebook also feature blatantly false or misleading information about COVID-19 and vaccines -- claims with the potential to affect the U.S. response to the pandemic, thus prolonging economic and social recovery.

Facebook posts that include links to Global Research tend to fall into three general categories: criticisms of U.S. foreign policy, conspiracy theories, and vaccine disinformation. Vaccine mis- and disinformation is particularly problematic right now, and stories from Global Research leverage Western voices that people in the U.S. might be likely to accept. 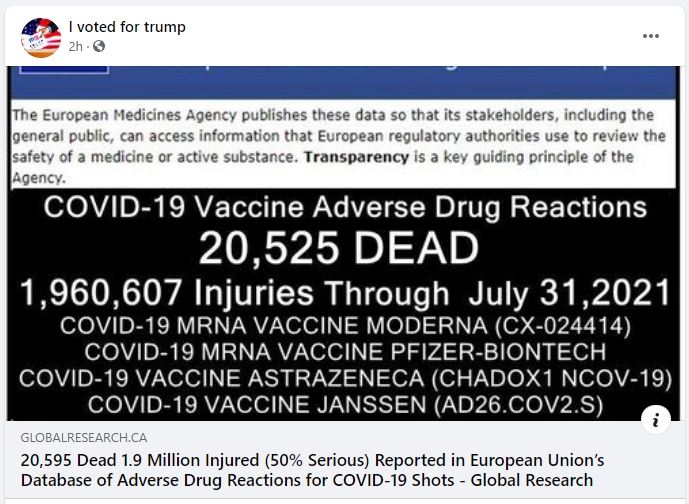 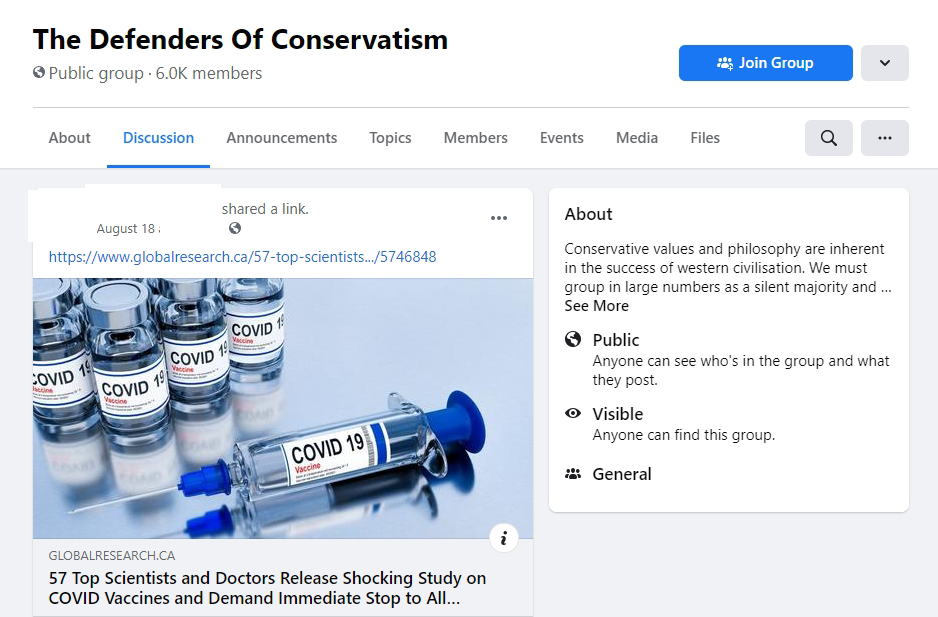 Misleading or false claims from Global Research are also spread via Facebook groups, including anti-vaccine groups and one dedicated to The Daily Wire's Candace Owens. 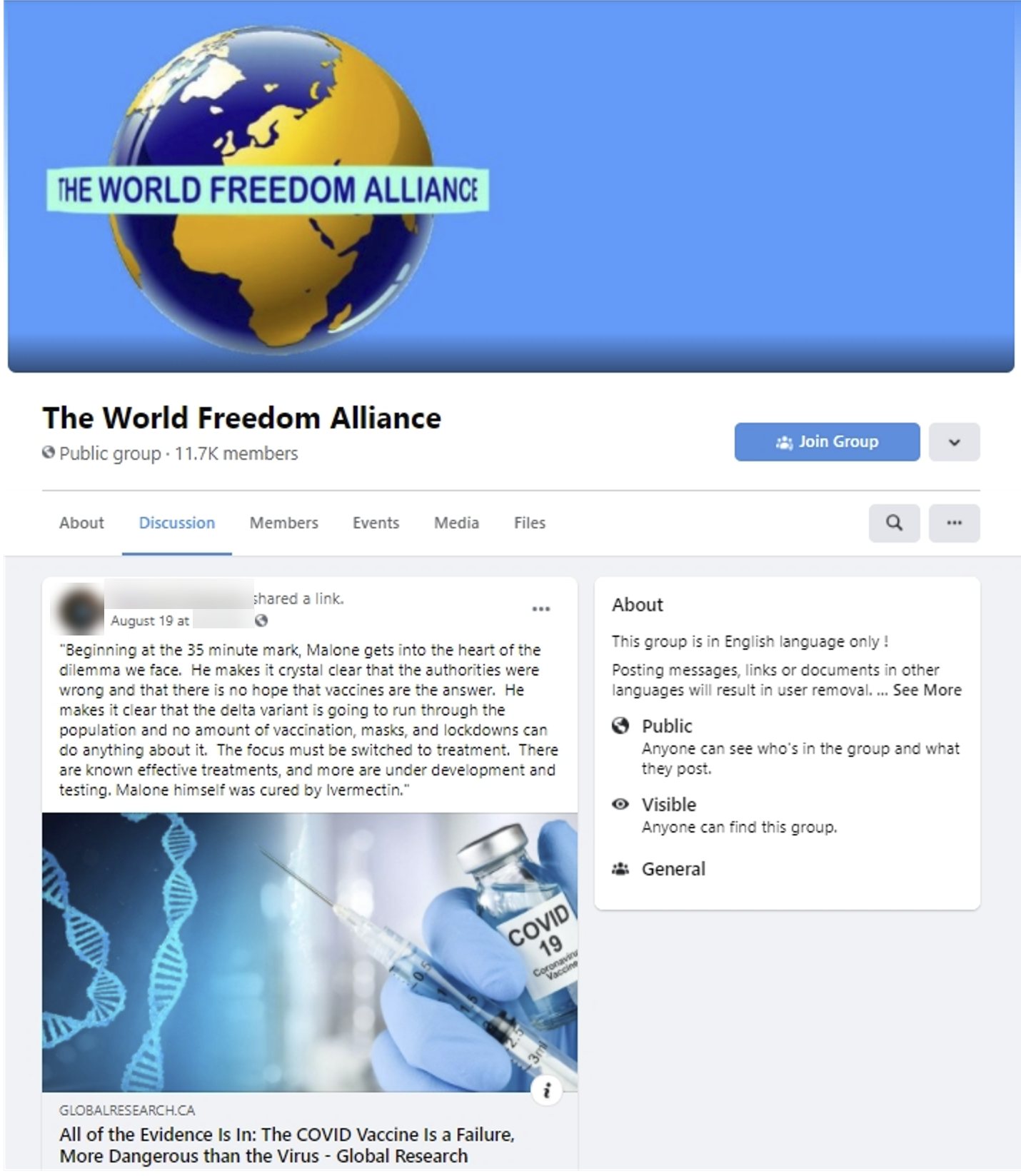 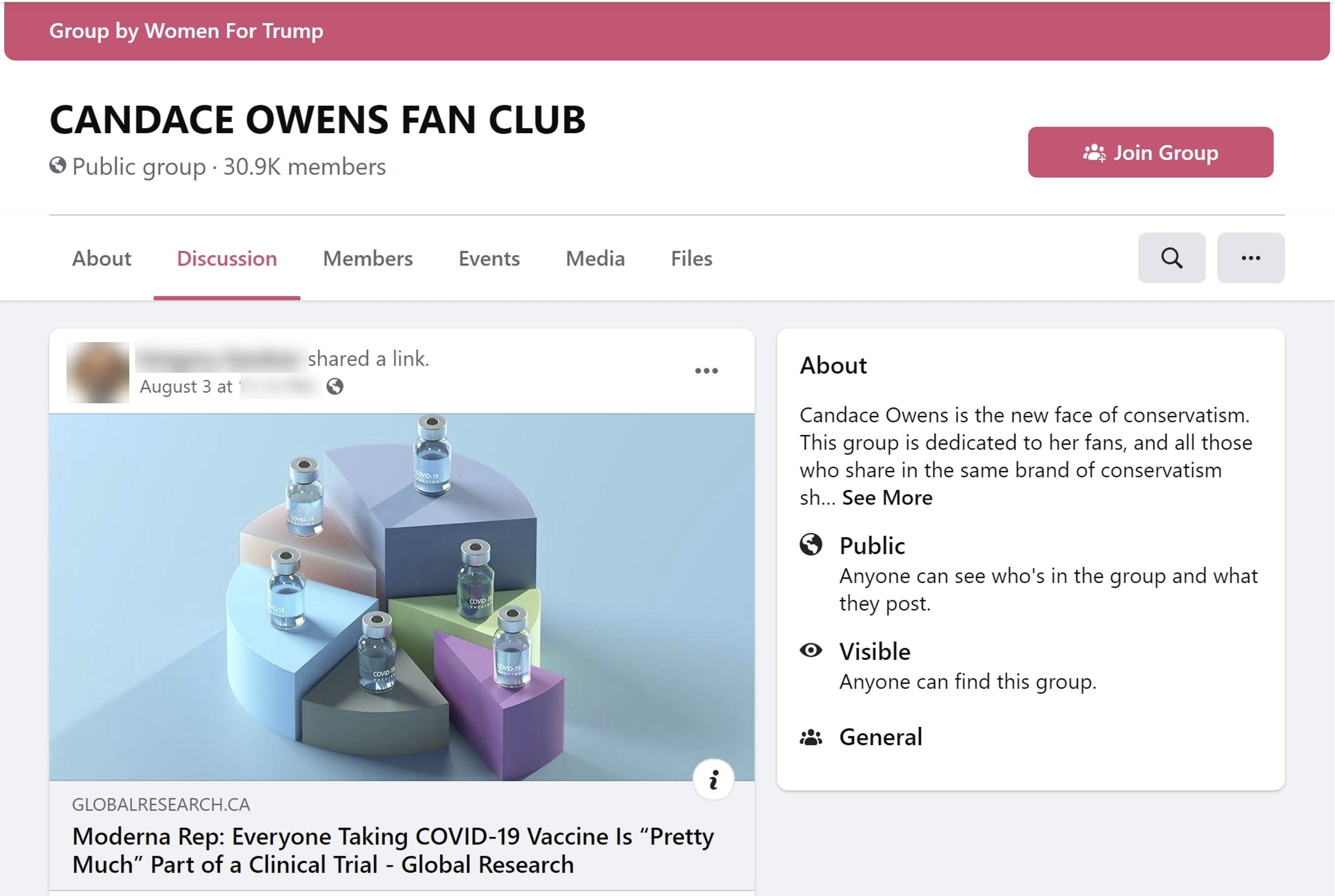 Examples of recent Global Research content on Twitter include conspiracy theories and misinformation about COVID-19 in articles such as “Fauci Claims Spread of Virus By Unvaxxed Will Lead to More Dangerous Variants, But Experts Say Opposite Is True” and “Report: ‘The Vaccines Are Neither Safe nor Effective.’” 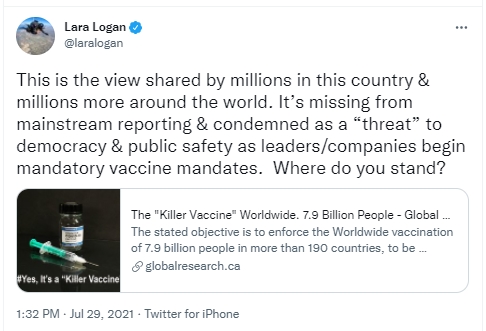 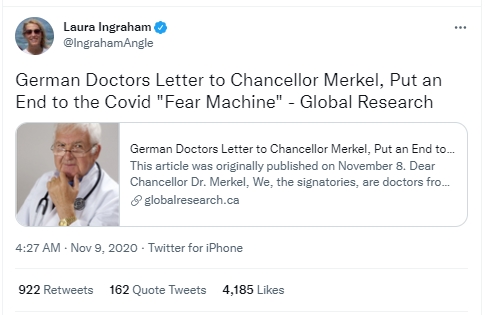 Global Research also maintains an account on Instagram with about 3,400 followers. The account currently follows just over a dozen other pages including 9/11 conspiracy theorists and the Children’s Health Defense, which Media Matters found has a history of linking back to Global Research as a source. 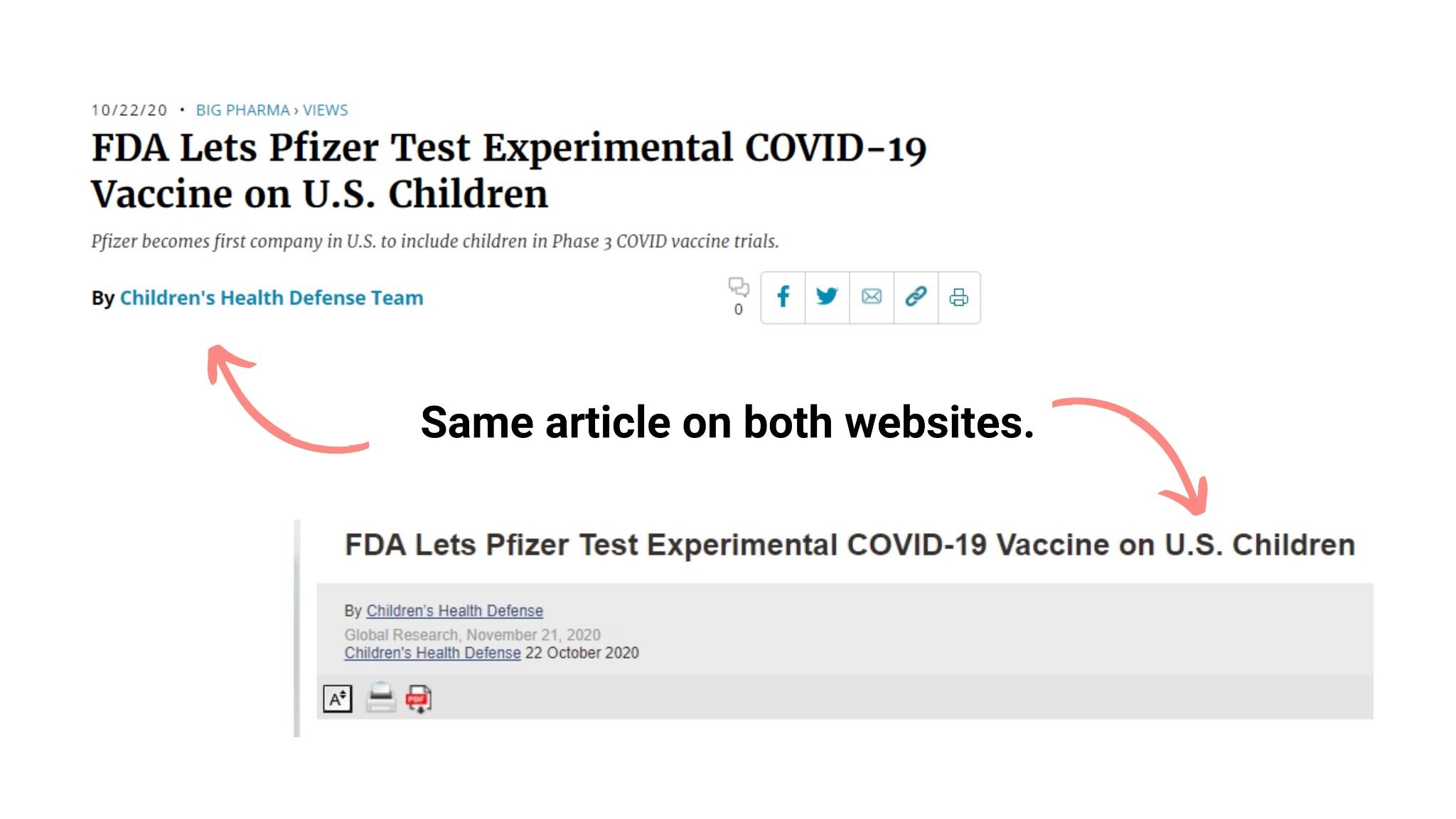 The website also appears to have a second Instagram account. Although there are no posts shown for this account, the bio section includes a LinkTree (a tool for sharing multiple links at once) which directs users to a variety of inaccurate Global Research articles. 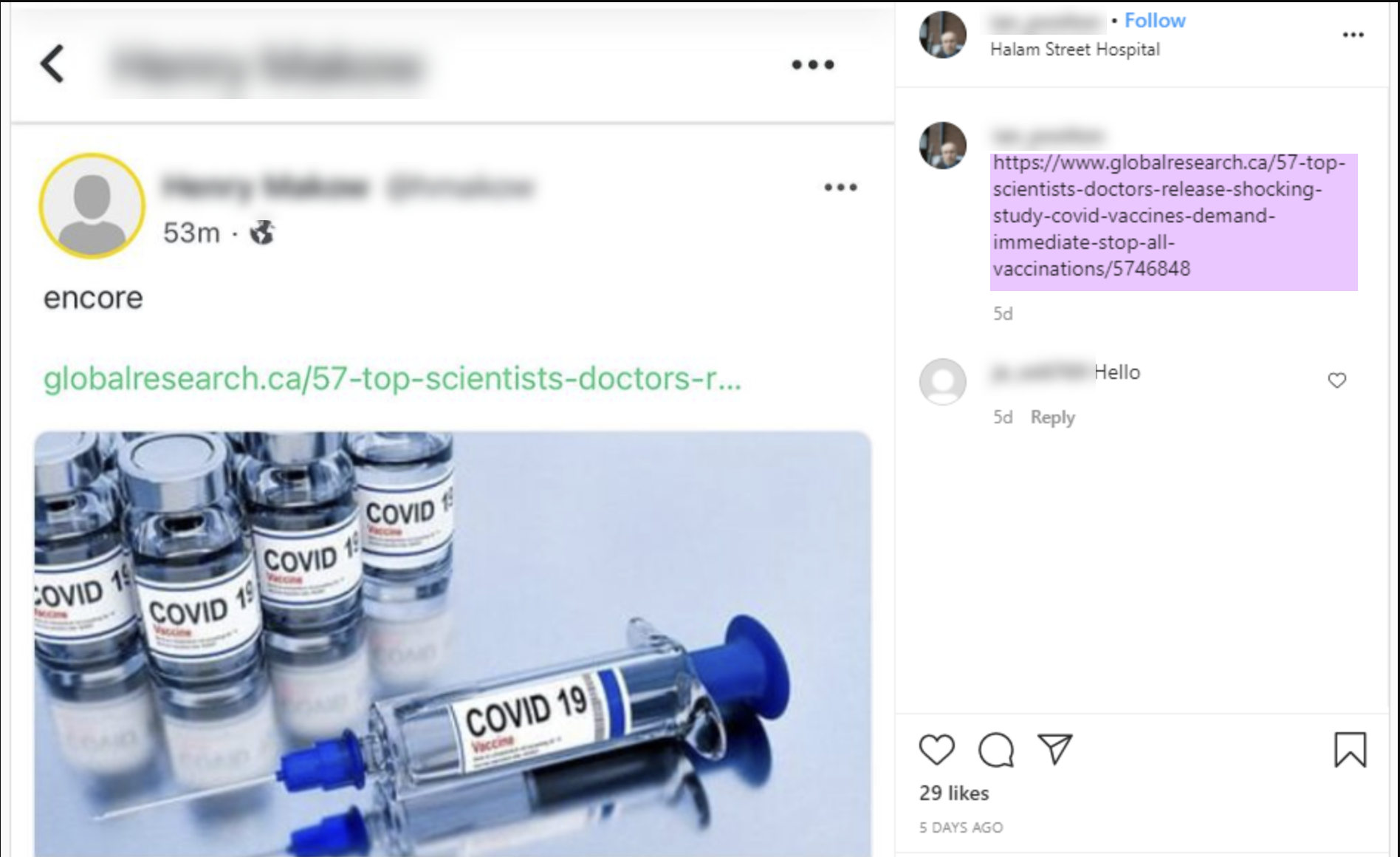 Global Research maintains a YouTube channel with about 38,600 subscribers and over 4.7 million views. The YouTube page includes 9/11 conspiracy theories, censorship claims, ”New World Order”-related narratives, and a playlist on “media disinformation” that itself appears to be disinformation.

Most of the videos are a year old or more, but recently, a second YouTube channel associated with Global Research has been far more active. This second channel -- which has the same globe logo as the outlet’s website -- is in French; its related site publishes similar content as the English-language Global Research website.

Much of the recent content on the French-language channel appears to be misinformation about COVID-19 -- seemingly in violation of YouTube’s policy against medical misinformation. 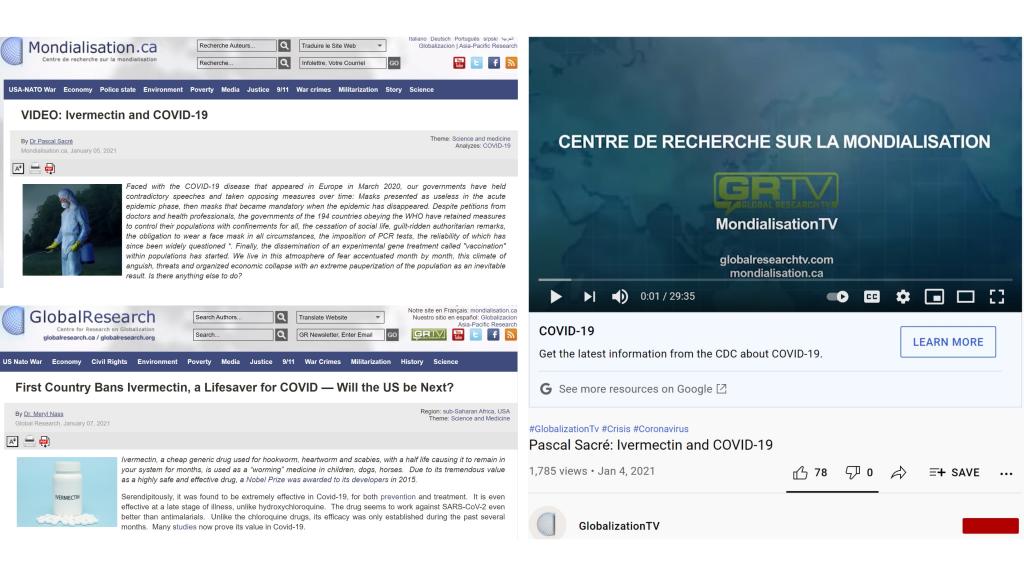 Facebook is far and away the most significant vector for sharing content from Global Research, which is noteworthy as the platform seemingly banned only the website’s account but not shares of content from its domain; users can and do still share Global Research links in posts and in groups where mis- and disinformation often flourishes.

According to the tracking tool BuzzSumo, of the 856,000-plus Global Research engagements across various social media platforms in the past year, over 804,000 -- a whopping 94% -- took place on Facebook.

The volume of articles shared and interactions tallied suggests that Facebook has the power to severely limit this pillar of disinformation by disallowing links to the website. It also illustrates Facebook’s outsized power to either funnel users to -- or protect them from -- adversarial information operations.

Many of the groups that cite and get published by Global Research -- or their leaders -- have themselves been banned from various platforms for spreading hateful content and misinformation, including right-wing anti-abortion outlet LifeSiteNews, Robert F. Kennedy Jr. of the anti-vaccine group Children’s Health Defense, and antisemitic Nation of Islam leader Louis Farrakhan. 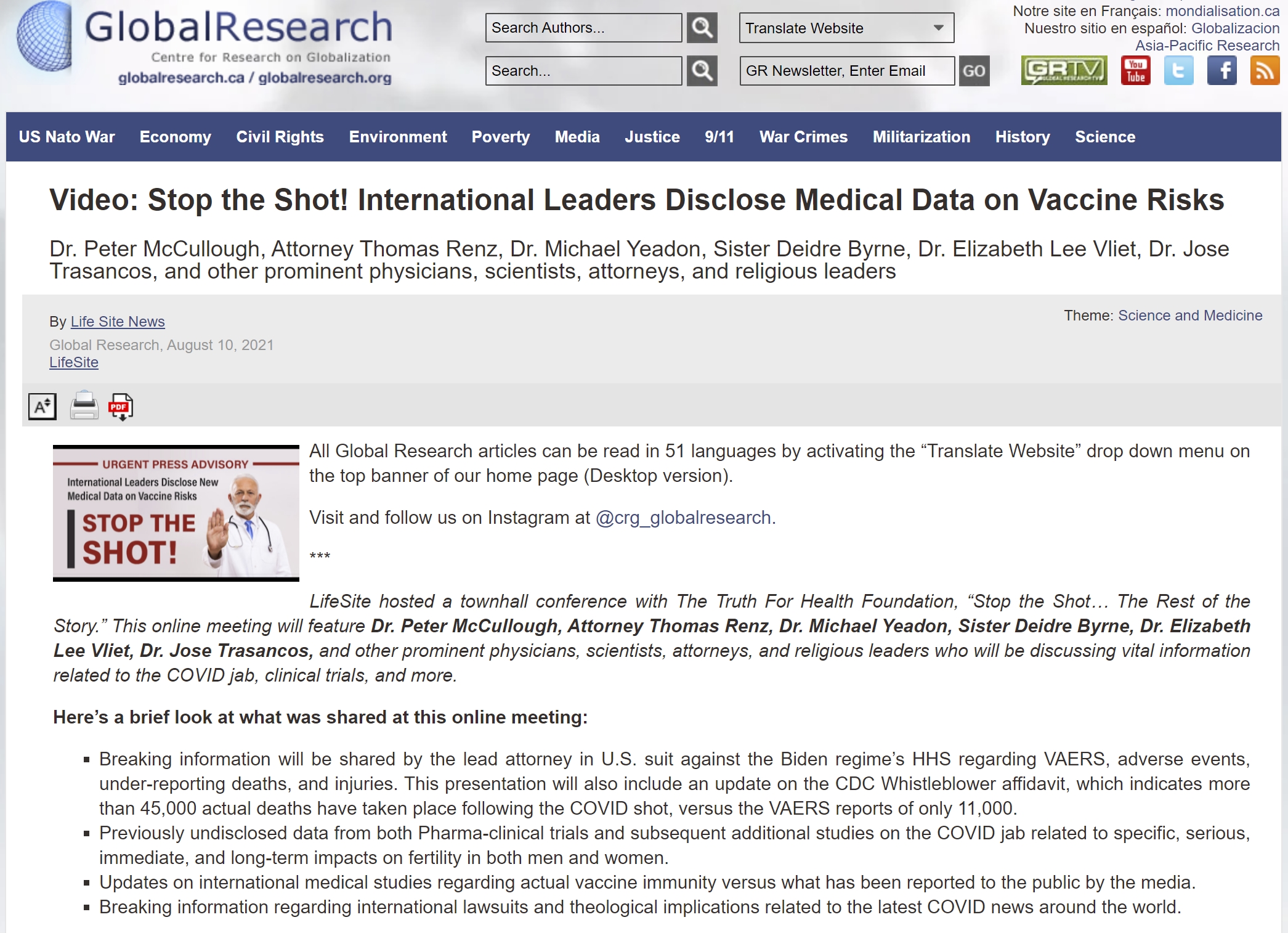 The Nation of Islam also links back to Global Research, as do hyperpartisan websites like The Gateway Pundit that are known for misleading and false claims, and far-right religious websites like Church Militant.

These messages coming to Western audiences from a seemingly trustworthy source -- one that the reader doesn’t associate with foreign disinformation -- has a much better chance of acceptance than overt propaganda. Global Research serves as a one-stop-shop for extremist ideas, conspiracy theories, and fantastical claims, but social media companies continue to provide a platform for its disinformation and lies.