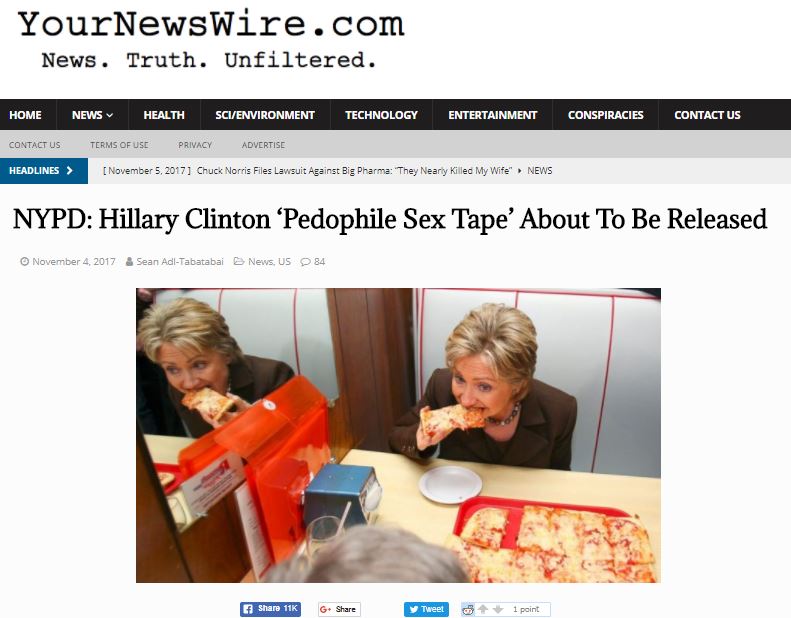 A prominent fake news website whose Facebook page has been verified by Facebook and which has been accused by experts of being a Russian proxy has revived the debunked fake news conspiracy theory known as “Pizzagate” in a new article. The article has also been promoted by Michael Flynn Jr., who played a role in generating significant exposure for the first iteration of the “Pizzagate” conspiracy theory.

On November 4, YourNewsWire published an article headlined “NYPD: Hillary Clinton ‘Pedophile Sex Tape’ About To Be Released.” The article claimed that the New York Police Department had “confirmed that a ‘sickening’ pedophile sex tape featuring Hillary Clinton is about to be released to the public” that depicts “Clinton engaging in a sexual act with her aide Huma Abedin and an underage girl.” The article, which features a photo of Clinton eating pizza, cites a Right Wing Watch article about Liz Crokin, a columnist known for pushing conspiracy theories surrounding slain Democratic National Committee staffer Seth Rich and who called the October Las Vegas mass shooting a “false flag,” for the claim.

The article is a continuation of the baseless “Pizzagate” conspiracy theory that Clinton and her presidential campaign were using a Washington, D.C. pizzeria to run a pedophila operation. The conspiracy theory was widely pushed by far-right media and fake news websites, including YourNewsWire, resulting in a gunman opening fire inside that pizzeria last December. Flynn Jr., the son of former national security adviser Michael Flynn, who had been a transition aide for President Donald Trump (and who could face criminal prosecution from special counsel Robert Mueller), quoted a Twitter user pushing the article, writing, “Oh…” and adding, “I’ll believe it when I see it......” Flynn Jr. was fired from Trump’s transition team last December after continuing to push “Pizzagate” following the pizzeria shooting.

The YourNewsWire article, which was shared on a verified Facebook page run by YourNewsWire’s operators, had nearly 10,000 Facebook engagements and more than 4,000 Twitter shares, according to social media analytics website BuzzSumo, and was shared by a number of other fake news websites. The article was also being heavily pushed by Russian-linked accounts, according to the Alliance for Securing Democracy.

YourNewsWire has a history of pushing fake stories, such as making up that actor Morgan Freeman called for Clinton to be jailed and that Clinton bribed Republicans in order to “destroy Trump.” Experts in the United States and European Union (EU) have reportedly accused the website of being a Russian proxy whose misinformation seems to fit Russia’s aims, such as falsely claiming that the EU lowered the age of consent to 13 and that Austria's new chancellor had targeted billionaire George Soros.