In April, Attorney General Jeff Sessions announced that the federal government would pursue a “zero-tolerance” immigration policy, resulting in the arrest of immigrants who tried to enter the United States and the separation and detainment of their children. The Trump administration has come under withering criticism for the policy, and Trump on June 20 signed an executive order allegedly reversing it.

Hours before Trump signed the executive order, Josh Cornett, a pro-Trump Twitter user, tweeted, “BREAKING: Senator Schumer has instructed fellow Democrats not to pass any legislation that could possibly help the children at the border, stating that ‘It will help voter turnout in the midterms’ and that CNN had agreed to help the Democrats with the storyline’... Developing.” 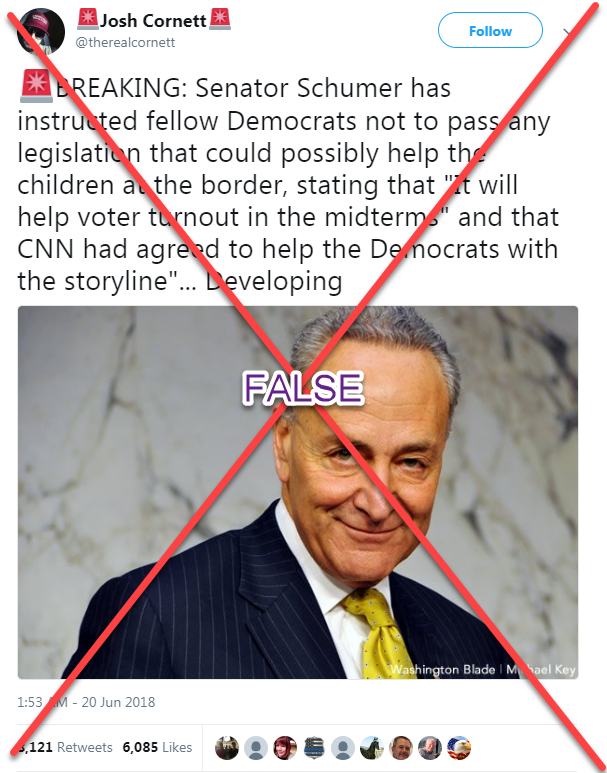 There is no evidence that Schumer said he opposed legislation to help midterm “voter turnout” or that CNN made any such agreement. Schumer has actually co-sponsored -- along with every other Senate Democrat -- a bill from Sen. Dianne Feinstein (D-CA) that would reverse the child separation policy. Schumer had also demanded that Trump reverse the policy on his own.

Nonetheless, the fake quote has been retweeted thousands of times, and other Twitter accounts have shared it, some of them attaching it in a reply to Schumer’s criticism of Trump or in reply to CNN. Another pro-Trump account added MSNBC to the fake story on June 21, and many accounts have run with that version.

The fabricated claim has also made its way to Facebook. Multiple pro-Trump pages have pushed a meme using Cornett’s same language. The meme, whose spread was helped by some pages connected to the hyperpartisan sites America’s Freedom Fighters and Mad World News, has been shared more than 76,000 times, including in multiple pro-Trump Facebook groups. Users have also tweeted the meme to Schumer’s Twitter account.