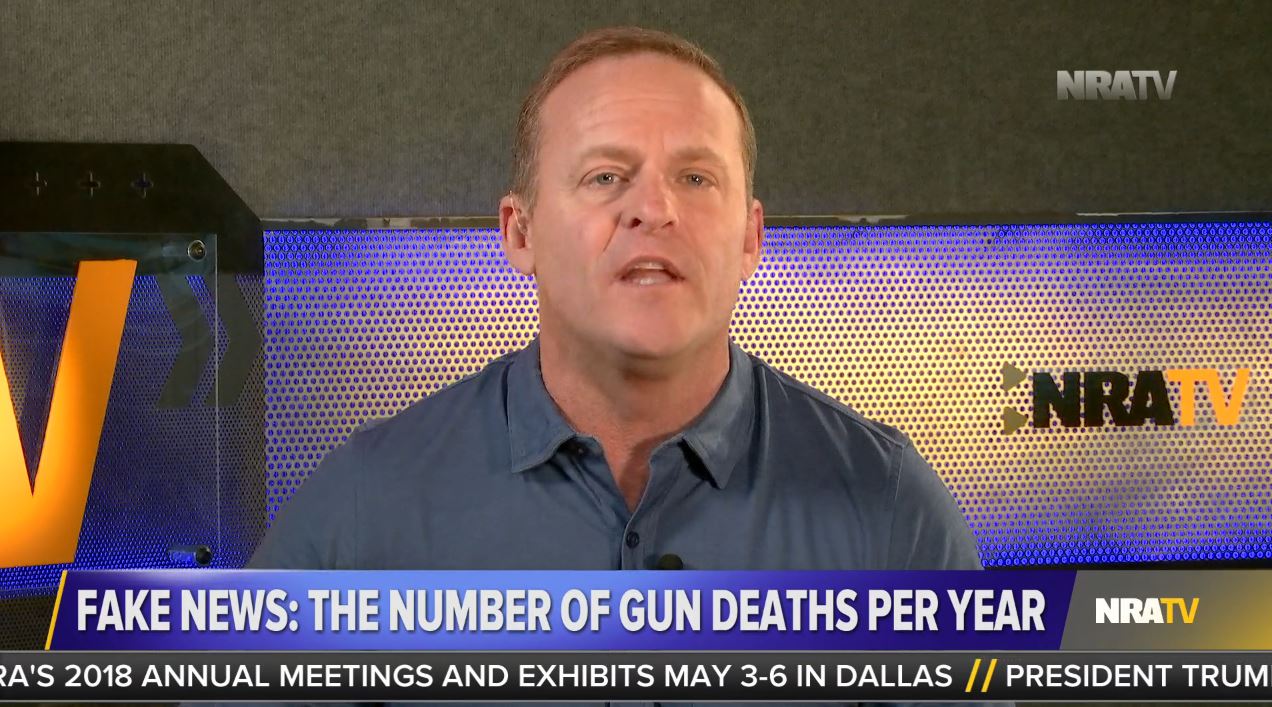 Grant Stinchfield, the host of the National Rifle Association’s news show, included what he called the “overused 30,000 gun deaths a year” statistic in his top three “fake gun news” stories of 2017, claiming that gun suicides -- which account for around two-thirds of the figure -- don’t count.

There were 36,252 deaths in the United States in 2015, according to the latest available data from the Centers for Disease Control and Prevention.Of those, 22,018 were gun suicides.

Stinchfield, who hosts a news show for the NRA’s outlet NRATV, cruelly claimed that including suicides within the term “gun deaths” was “fake news,” calling the statistic “deceptive” and used by the media to “wage war on gun ownership”:

GRANT STINCHFIELD (HOST): So 2018 is shaping up to be a busy year for us here at NRATV, exposing and correcting fake news has, yes, become a full time job for us. The devious and deceitful media are not letting up. So while President Trump released his top three fake news stories, I want to officially release mine. All related to fake gun news, of course.

STINCHFIELD: The final fake news of the year comes in the form of a statistic, the overused 30,000 gun deaths a year. The left never mentions that two-thirds of those include suicides. Yet it is a number thrown around like confetti. And it’s deceptive to say the least. From The Washington Post to The New York Times, they all use it to wage war on gun ownership. It’s all fake news.

According to Harvard University T.H. Chan School of Public Health, a review of 90 long-term studies found that “even when narrowing the field to studies of serious attempters,” the vast majority of people who survived a first suicide attempt “did not go on to die by suicide.” Yet those who attempt suicide by firearm rarely get the chance to continue their lives, as they are successful in their attempts 82.5 percent of the time.

A July 2016 study in the American Journal of Public Health also found that states with the highest gun ownership levels also typically have the highest suicide rates. In 2011, the National Institute for Health found that the mere presence of a gun in the home can increase the likelihood of a successful youth suicide.

Alternatively, removing firearms from the immediate access of a suicidal person has resulted in a 68 percent drop in the number of gun suicides. Harvard University’s Means Matter campaign has focused on limiting firearm access for suicidal individuals in crisis.

Not counting gun suicides as “gun deaths” has been pushed as a right-wing talking point before, but it has no basis in logic. As psychiatrist and Georgetown University professor Liza Gold explained to The Trace, “Firearm violence is firearm violence. Let’s say you work in a hospital and you have 100 people with lung cancer, and 50 percent of them have it because they were smokers. Are you going to say to the smokers, ‘Your cancer is not as important because you were smoking and you should have known better?’ I don’t think so. You treat them exactly the same. So, firearm violence is firearm violence, whether it’s committed against oneself or committed against others. It’s all bad.”