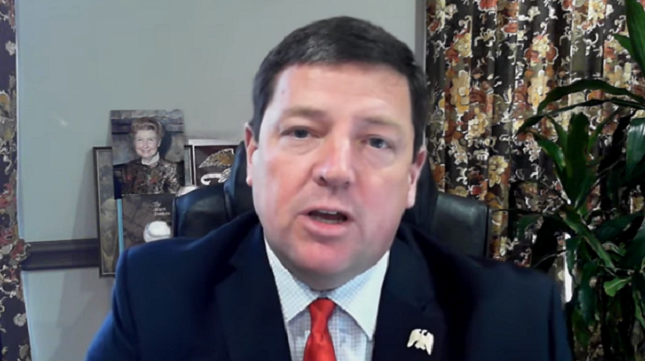 CNN’s latest pro-Trump commentator has repeatedly echoed the president’s rhetoric against the network.

Ed Martin recently announced that CNN has hired him to be a political commentator and said he was “proud to join CNN to continue to make the case for Donald Trump.” But Martin has called CNN “fake news” and “state-run media” and said the network hasn’t “been credible for a long time.” He has also praised self-proclaimed “guerrilla journalist” James O’Keefe for his disinformation campaign against CNN and encouraged people to “move away from” the network because they are “obviously not telling the truth.”

Martin is the president of the Eagle Forum Education & Legal Defense Fund, which was founded by the late anti-gay and anti-feminist writer Phyllis Schlafly. He also co-hosts the radio program Phyllis Schlafly Eagles.

The St. Louis Post-Dispatch reported in January that “drama has been a prominent factor in Martin’s own career.” He resigned as chief of staff for Republican Missouri Gov. Matt Blunt in 2007 “amid controversy over the firing of a staffer that cost the state a $500,000 settlement.” And Eagle Forum board members have accused “Martin of manipulating” Schlafly for “his own agenda” (which he has denied).

Martin spoke at a 2016 tea party rally and said: “You're not racist if you don't like Mexicans. They're from a nation. If you don't think Muslims are vetted enough, because they blow things up, that's not racist.”

He had until recently been making unpaid appearances on CNN to defend Trump and his policies -- with frequently embarrassing results:

Martin has appeared on several other outlets, including Fox News, RT America, and conspiracy theorist Alex Jones’ program. During an April 10 appearance on Jones' Infowars network, Martin praised Jones for doing “valuable” work in fighting the “globalists” and later encouraged people to “reject the mainstream media.”

As a pundit, Martin has reserved some of his harshest criticism for his new employer.

During a segment of his June 27 radio program -- which he labeled “fake news Tuesday” -- Martin praised discredited conservative pundit James O’Keefe for his inept work against CNN and said of the network: “I think CNN is on the ropes. I don’t know, I don’t know what you do now if you’ve become so -- they haven’t been credible for a long time but now they’ve really been exposed and I don’t know what they do to recover.”

He later suggested that listeners not watch CNN, stating: “CNN is obviously not telling the truth and people have to push past it and move away from it because they’ve got to find real truth." He added that "to see CNN implode so dramatically is pretty extraordinary.” He later claimed of CNN’s coverage of Trump: “At a certain point you have to start to say, ‘Hey, this is so distorted, the coverage by CNN, it is worse than ever.’”

During a September 26 radio appearance -- after his hiring was announced -- Martin said that he's been telling people “with a straight face -- I'm trying to say, 'Hey look, this is the most reliable place on the planet to watch TV news.'” He added that doing CNN is “a challenge” because “it seems like the hosts are usually a bit against my position as well as my kind of fellow panelists. But it is either going to be really exciting and hopefully fruitful or really good training on how to survive this kind of thing.” He later said that CNN doesn’t have the same amount of conservatives as Fox News but that could be a good thing because he stands out.

Despite Martin’s complaints about CNN, as media reporter Michael Calderone noted last month, there are “at least a dozen paid contributors on the network who are reliably supportive of the president. … CNN president Jeff Zucker has long justified the network hiring pro-Trump pundits during the campaign -- including, most controversially, former campaign manager Corey Lewandowski, who left the network shortly after the 2016 election.”

CNN did not respond to a request for comment.