A fake news website that has been classified as a Russian proxy by European Union officials is claiming that a 4chan user who purports to be from the White House was its source for a story.

On January 31, following a collision between a train carrying Republican members of Congress and a garbage truck in Virginia, YourNewsWire published a fake story headlined “White House: GOP Train Crash Was ‘Deep State’ Assassination Attempt” that claimed “White House sources” had told it that the incident “was a false flag orchestrated by the Deep State in an attempt to avoid the release of the FISA Abuse memo.” The article added, “According to QAnon, the White House staffer who has predicted the future with remarkable accuracy in the last two months, the Deep State is running scared and attempting to cover its tracks.” And on Twitter, in response to a user who questioned the accuracy of the article, the website’s Twitter account responded, “QAnon is the White House source.” 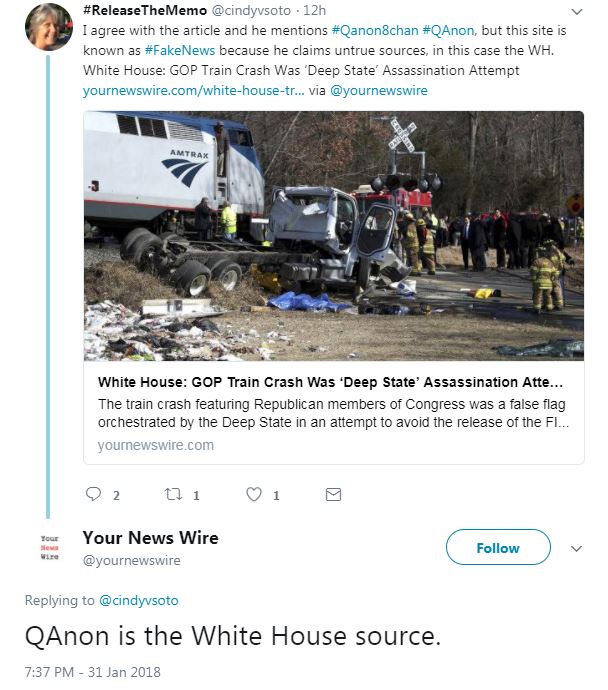 “QAnon” refers to a conspiracy theory known as “The Storm” that started making rounds on 4chan and 8chan message boards late last year. The conspiracy theory claims that a person known as “Q” who claims to be a “high-level government insider” has been writing posts, or “crumbs,” to “covertly inform the public about POTUS’s master plan to stage a countercoup against members of the deep state.” The scope of the conspiracy theory has now expanded to include all kinds of events, such as the fire at Trump Tower in early January, and has even been invoked to accuse model Chrissy Teigen and her husband, singer John Legend, of pedophilia.

This is at least the second time the website has cited QAnon for a fake story. On January 4, it claimed in a fake story that according to QAnon, “Trump’s recent announcement that he is going after high profile child traffickers is directly linked to” a fire on the estate of Bill and Hillary Clinton (Trump has also made no such announcement). YourNewsWire has also claimed that certain events were “predicted by QAnon,” has promoted conspiracy theory website Infowars’ hyping “The Storm,” and has embedded tweets pushing the conspiracy theory in its articles.

YourNewsWire, which was founded in 2014 and is based in Los Angeles, has come under fire for repeatedly publishing fake stories such as the Centers for Disease Control claiming that the flu shot was causing a “deadly flu epidemic,” a dying former MI5 agent confessing to killing Princess Diana, and actor Keanu Reeves claiming that Hollywood uses babies’ blood to get high. Some of YourNewsWire’s fake stories were some of the most viral fake stories of 2017, according to a BuzzFeed study. The website has also been classified as a Russian proxy by the European Union's East StratCom Task Force, a task force established to fight Russian propaganda.