A man vocal about his aims to deceive conservatives with his “satire” websites has created multiple made-up stories alleging voter fraud in the Alabama Senate special election. Some of these made-up stories have gone viral and were subsequently copied by fake news websites in an attempt to delegitimize the election and fuel right-wing myths about widespread voter fraud.

Christopher Blair is a self-professed troll who tries to deceive conservatives with stories on multiple websites he claims are satire, and has smeared people in his content. In the lead up to the Alabama special election between Republican Roy Moore and Democrat Doug Jones, Blair’s websites published multiple stories attempting to discredit numerous allegations of sexual misconduct against Moore by making up other women who, according to the stories, were caught in their lies against the Republican candidate. One story, claiming that one of Moore’s accusers admitted on MSNBC that she lied, was shared so much on social media (in part thanks to fake news websites that ran with it) that Alabama conservative radio host Dale Jackson complained that “people keep sending” this fake news to him and a fact-checker from FactCheck.org told NPR that she was forced to debunk it. 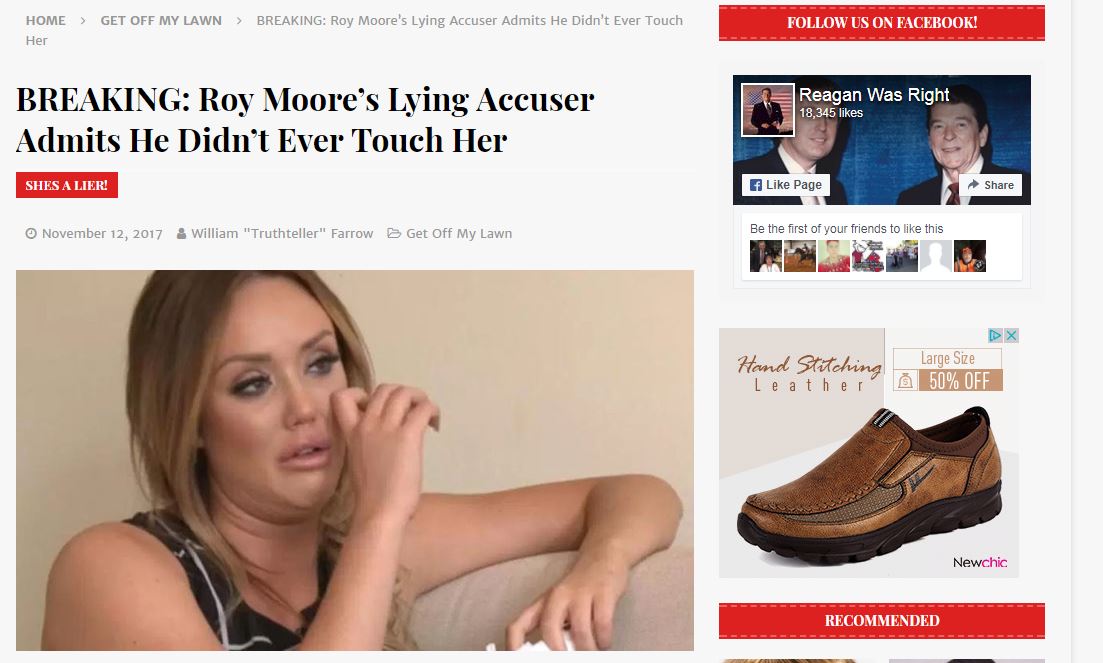 Since the day of the Alabama election, Blair and his websites have run nearly a dozen stories suggesting there was rampant voter fraud. These stories contain false allegations such as that polling officials caught a “van full of illegals” who were voting in multiple polling locations, that thousands of dead people voted for Jones, that a “busload of blacks from 3 states drove to Alabama” to vote for Jones, and that black people were caught voting multiple times with “fake IDs,” among others. As The Washington Post’s Dave Weigel noted, some of these stories went viral. Other fake news websites shared the story about a “van full of illegals," and it received nearly 40,000 Facebook engagements combined, according to social media analytics website BuzzSumo. The “fake IDs” story, which the Montgomery Advertiser also noted was fake, was also shared and engaged with by thousands on social media. The stories were further amplified thanks to fake news websites. 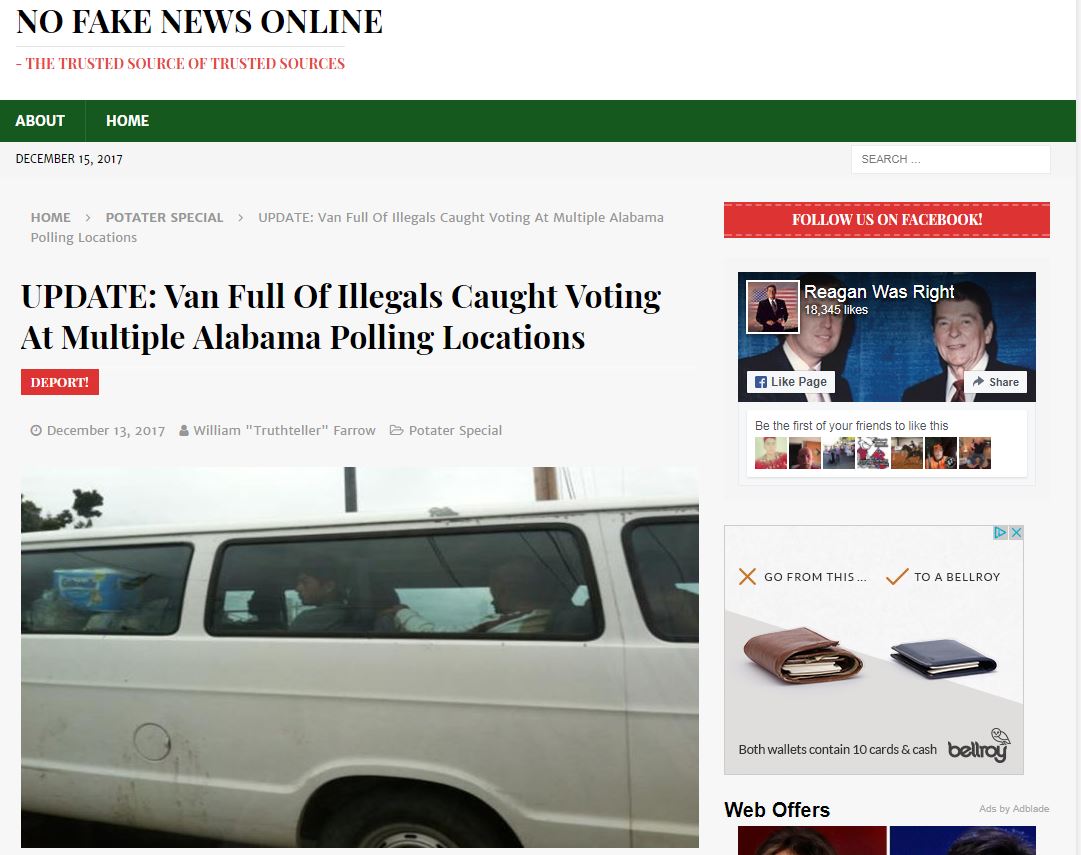 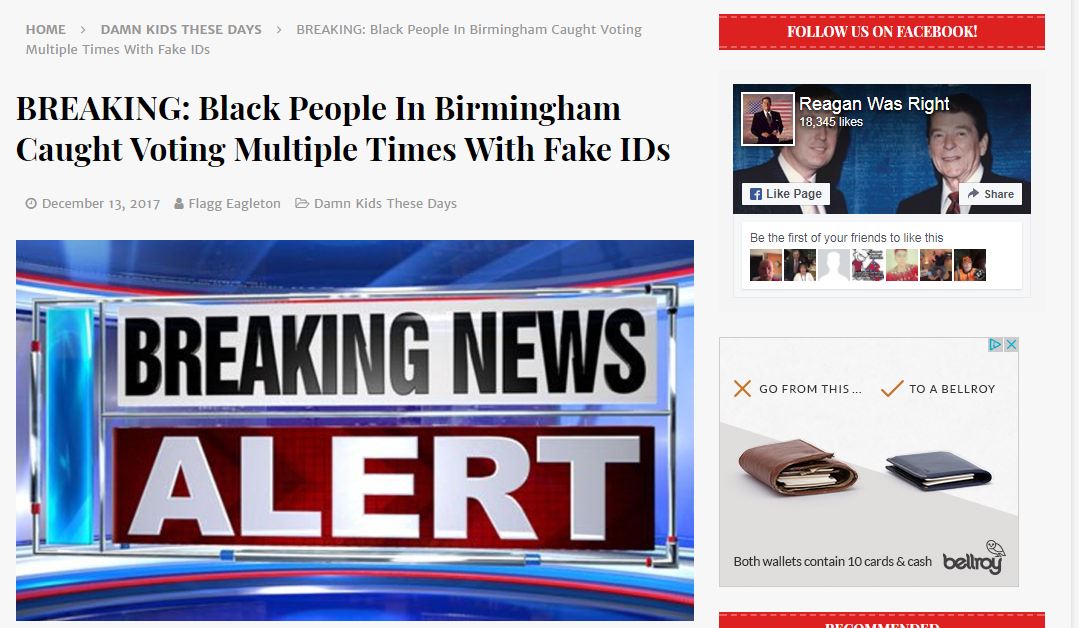 As evidenced by the comments, many people who shared and responded to the made-up voter fraud stories on social media believed them to be true, writing that it showed that “we have to have voter I.D. in order to vote” and, “That's how the Dems have played for years, if you like a candidate vote 3 or 4 times, be sure the dead vote.” Blair even egged on some of these people, with the Facebook page for his website The Last Line of Defense writing back to someone who seemed to believe the “van full of illegals” story, “This is why we’re here, patriot. This is why we’re here.”

Blair’s actions are helping fuel existing right-wing efforts to push widespread voter fraud myths. He’s been launching more “satire” websites over the past several weeks, and some of those new websites have also published a few of these made-up Alabama stories. In the past, Blair has apologized for smearing fallen soldier Sgt. La David Johnson and a Toronto-based imam, but his stories continue to defame others and are given a bigger platform when fake news websites pick them up. Adding to the dubiousness of his apologies, Blair and his writers have lashed out at people who have criticized them and been forced to debunk his stories. And recently, Blair called criticism of the Alabama stories “hyperbolic” and again defended his stories as just “satire” in a Facebook post, showing his refusal to accept responsibility for spreading lies.