On June 8, Bourdain was found dead in his hotel room in France, in what was later ruled a suicide. Soon after, Neon Nettle and YourNewsWire, two fake news websites known for pushing dangerous and toxic misinformation that often goes viral, published multiple fake stories claiming that Bourdain was killed by “Hollywood elites” or “killed by Clinton operatives” because “Hillary Clinton threatened” him “weeks before his ‘suicide’” and because he was “about to expose an elite pedophile ring before he died.”

These fake stories and other articles from the site exploiting his death to suggest that he was the victim of foul play and that it was part of some larger conspiracy involving pedophiles have drawn more than 356,300 Facebook engagements combined, according to social media analytics site BuzzSumo. 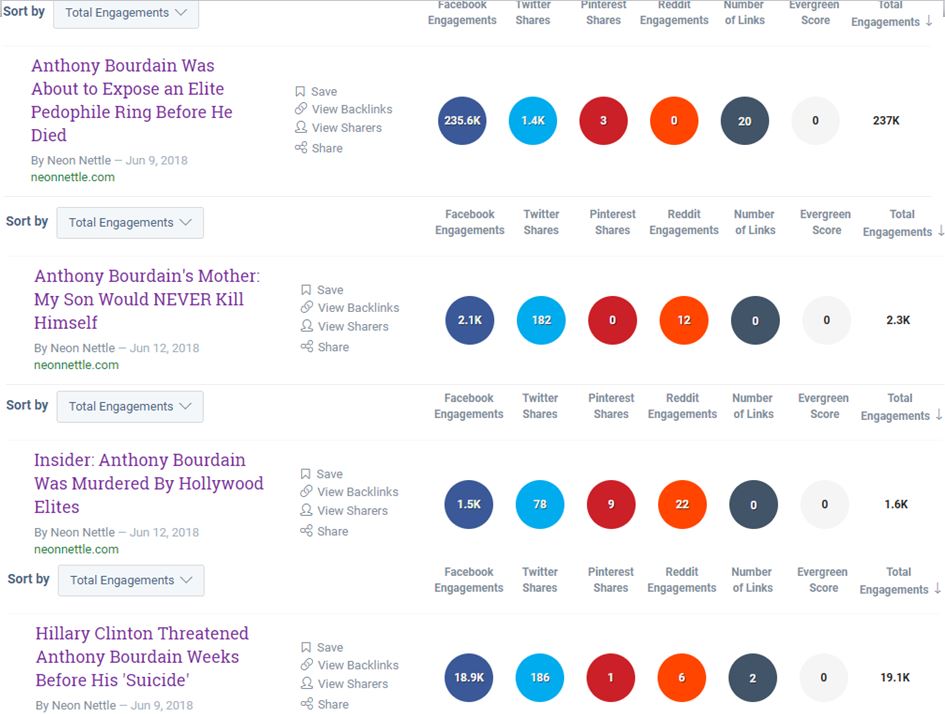 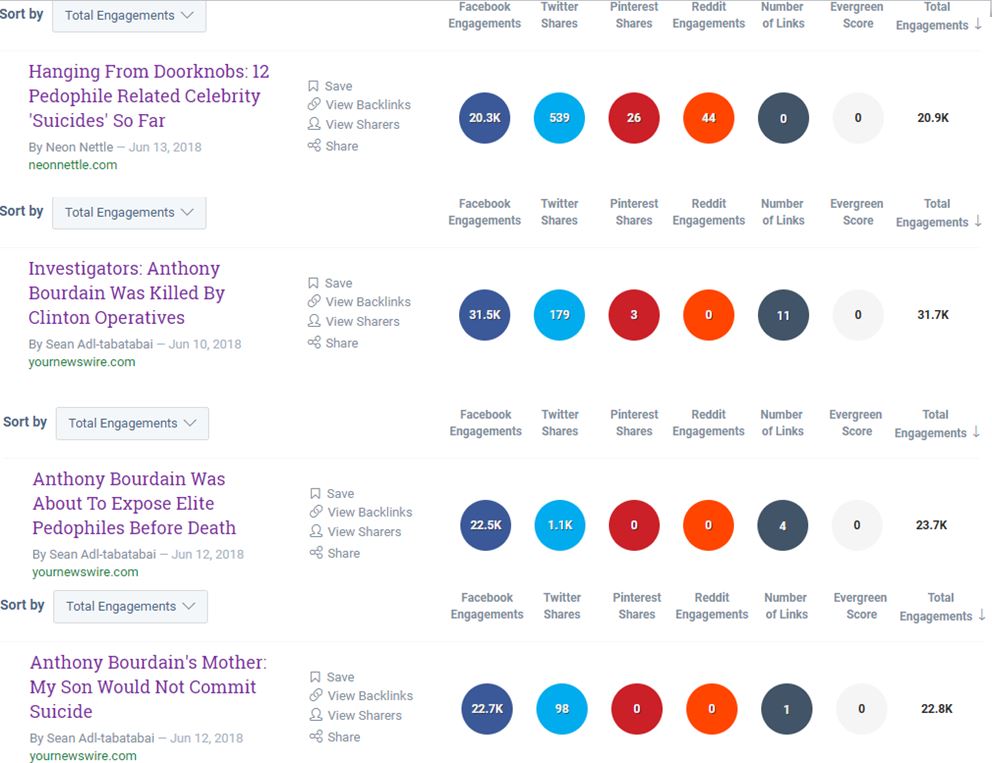 The sites’ fake stories had a wide reach on social media and message boards. They were shared on Facebook by the pages Vets for Trump and Veterans for Trump, a Turkish singer, groups dedicated to the debunked Pizzagate conspiracy theory, and a group dedicated to the “QAnon” conspiracy theory; on Reddit by the conspiracy subreddit; on Twitter by YouTube host and previous RT op-ed contributor Lionel; and on multiple YouTube channels, some of which featured advertisements, meaning the accounts were making money off of the false claims.

The fake stories also made their way to radio, a medium that struggles with fake news. Puerto Rican music station WTOK-FM posted the Neon Nettle story about Bourdain exposing a pedophile ring on its Facebook page. And in response to a user who wrote, “The same thing was said about Chris Cornell & Chester Bennington,” referring to the deceased singers from the bands Soundgarden and Linkin Park, respectively, the station wrote, “Sad but true.” A host on Georgia talk station WYAY-FM said that “apparently Anthony Bourdain was murdered by Hillary’s people” and then seemed to refer to one of the fake stories, saying that “Bourdain’s death was the result of Clinton sending operatives after the celebrity chef because he was about to expose … [a] pedophile ring involving Hillary,” adding that he knew “it’s got to be true because Snopes says it’s not.” A host on Tennessee talk station WWTN-FM read the entirety of one of the Neon Nettle fake stories on air for nearly five minutes before finally saying there was “no evidence of it whatsoever.” And syndicated radio show Walton & Johnson pushed the claims twice, with the hosts saying Bourdain was “very concerned about pedophila and child molestation” and “Hillary took him out,” and days later pushing one of Neon Nettle’s articles, saying that “there have been 12 pedophile-related celebrity suicides that they can document that were hanged from a doorknob,” of which Bourdain was “the latest.”

Besides radio, one of the Neon Nettle fake stories was linked to and shared by TV stations throughout Central and South America. Two stations in Ecuador, TVC and RTS, two stations in Paraguay, C9N and SNT, along with Nicaragua’s Canal 10, El Salvador’s Canal 12, the Dominican Republic’s Antena 7, Bolivia’s Red Bolivisión, Chile’s La Red, and Costa Rica’s Repretel shared an article claiming that Bourdain was about to “denounce a pedophile network of the elite,” according to “independent newspaper NeonNettle.” The stations also included a video summing up the article, which also mentioned Neon Nettle by name (video above).

The foreign stations also shared the article on their Facebook pages, helping expand the hoax’s reach. The story was also shared by Spanish-language news outlets BL es Mundo and Ayayay.

All of the fake stories from the two sites about Bourdain featured advertisements from the ad networks Google AdSense and/or Revcontent, meaning they were able to monetize these lies.