UPDATE: After the publication of Media Matters’ story, Houck deleted his Facebook post and wrote: “I apologize for retweeting a fake news story re: Denzel Washington I didn't even read.”

Houck is a retired detective who now works as a CNN law enforcement analyst. He has a long history of race-baiting commentary and regularly blames the victims of police brutality. He also uses his CNN platform to peddle racist tropes about black criminality.

On December 2, Houck posted a link on his Facebook profile to a YourNewsWire story with the headline “Denzel Washington: ‘Criminal-In-Chief’ Obama ‘Tore Heart Out Of America.’” Houck shared the story with the comment: “Without a doubt!” 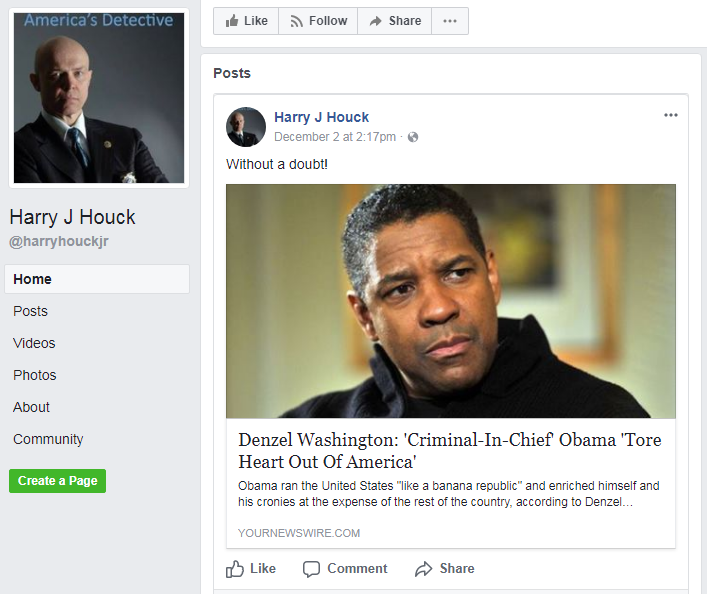 YourNewsWire is a fake news website that posts made-up stories and fabricates quotes. Houck’s employer CNN has reported that the site isn’t reputable: Media reporter Brian Stelter wrote last year that the “dubious site … publishes a mix of true, slanted and made-up news.” Analysts have criticized YourNewsWire for being used as a proxy by Russians for spreading disinformation.

The YourNewsWire story claims Washington said that Obama “ran the United States ‘like a banana republic’ as ‘criminal-in-chief.’” YourNewsWire also claims that Washington criticized CNN for its purported pro-Obama bias: “'Why aren’t CNN discussing the facts? They think we are too stupid to understand the metrics?’ Denzel Washington said, explaining that he had seen ‘a CNN segment about Obama’s legacy that blew my mind and left me raging.’”

The story also quotes Washington -- who supposedly said all of this at a “New York screening of his new film” -- alluding to several conservative conspiracy theories about Obama: “Where did he come from? What was he really doing before running for office? His history sure isn’t what they say. Did he go to Columbia? Who put him in power?”

Like many other YourNewsWire stories, the Washington article is fake and the quotes in it are fabricated. Publicist Alan Nierob, who represents the actor, told Media Matters: “He did not make those statements.”

GossipCop.com previously wrote that the “article is simply a piece of fiction, complete with wholly fabricated quotes wrongfully attributed to the Oscar-winning actor.” It noted that the article didn’t give any specifics about where Washington purportedly made the remarks and the piece repeatedly misspelled Washington’s first name. The article appears to have since corrected the misspellings but the URL of the piece still contains the name “Denzil.” (The top comment on the post as of Monday morning was a user proclaiming, “WOW, Denzil, good for you!”)

The fake Denzel Washington story has been shared over 48,000 times combined on Facebook, Linkedin, and Twitter so far, according to the social media analytics website BuzzSumo. Fake news websites spread made-up stories about Washington switching his support to Donald Trump last year.

CNN did not immediately reply to a request for comment.