Update (6/21/22): Following publication, Meta removed most of the listings for AR-15 parts mentioned in the story from Facebook Marketplace for violating the platform’s Community Standards. The sponsored ads mentioned in the article were also removed. However, most of the sellers and listings on Instagram Shopping remain active. Despite the company’s insistence that “any sale of guns or gun parts is a clear violation of our commerce policies,” AR-15 and other gun parts remain widely available on both e-commerce platforms.

In just a few short clicks and without passing any background check, Facebook and Instagram users can buy almost everything they need to build an AR-style rifle using Meta’s e-commerce platforms Facebook Marketplace and Instagram Shopping.

A Media Matters review has found dozens of listings on both Meta platforms for gun parts, accessories, and even ammunition, with several of the products for sale apparently listed by private sellers. Instagram is even processing many of those transactions in-app — and taking a cut. Meta’s commerce policies — which apply to both Facebook and Instagram — explicitly prohibit the sale of “firearms and firearm parts,” although the company reportedly allows users to violate those policies as many as 10 times before banning them.

Additionally, we found ads on both Facebook and Instagram that seem to be pushing the boundaries of Meta's ad policies, including several ads for raffles with a grand prize of a brand-new AR-15.

While Meta prohibits the sale of firearms, gun parts, ammo, or other potentially dangerous products on its platforms, the company is failing to prevent users from buying or selling nearly every part needed to build an AR-15 on Facebook Marketplace and Instagram Shopping, including detailed instructions and tools to make it a fully operational weapon. Users can also outfit their new weapon with high-capacity magazines — or modify it with a trigger that increases the effective rate of fire — using goods purchased on Meta's platforms.

The only part of an AR-style rifle we did not find a listing for was a complete lower receiver, which holds the trigger and other parts that allow the gun to fire, and because of this function it is the most tightly regulated part of the weapon. Despite those regulations, we found a listing for an unfinished, so-called “80%” lower receiver on Facebook Marketplace, which may fall short of qualifying as a firearm under federal law because it's incomplete. However, with a few modifications using tools that can be bought at any hardware store, someone could easily turn this into part of a fully operational weapon.

There were also listings on Instagram Shopping and Facebook Marketplace for AR-15 trigger groups, which contain the trigger, hammer, and other parts needed for the rifle to fire. One listing was for a “wide open trigger,” which modifies a firearm to shoot faster. While such a trigger does not change the number of rounds fired with each pull, it does reset the trigger much faster between shots, allowing someone to fire more quickly than would be possible with a standard trigger.

Another Facebook Marketplace listing was for custom ejection port covers emblazoned with the logo of the Three Percenters, an anti-government movement whose acolytes have been associated with several violent plots. Meta’s community guidelines supposedly prohibit content from “Dangerous Individuals and Organizations” who “proclaim a violent mission or are engaged in violence.” Non-customized ejection port covers are also for sale through Instagram.

Accessories and other weapons

In addition to almost all of the parts required to build an AR-15, we found several instances of businesses and seemingly private users on these platforms selling weapons parts, ammo, or gun accessories — most of which violate Meta’s commerce policies. One of the listings included an industrial-grade flamethrower that casts flames up to 25 feet. 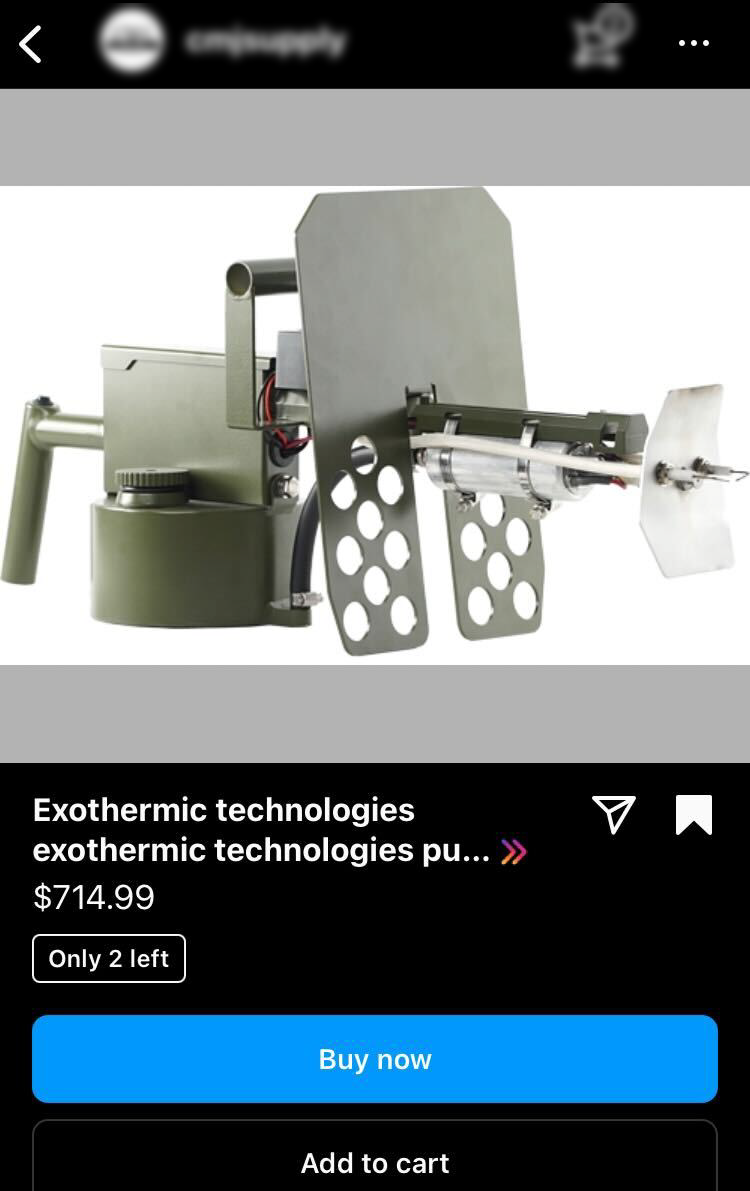 There were several listings for AR-15 magazines on both Facebook and Instagram that hold more than 10 rounds of ammunition, which were federally banned under the 1994 Violent Crime Control and Law Enforcement Act. That ban expired in 2004, though several states have enacted similar laws regulating their sale since then. High-capacity magazines have been used in numerous mass shootings.

Meta is not only facilitating the sale of weapon parts and ammunition via its platforms, but it’s also profiting from users taking advantage of its targeted advertising services.

The company’s policies prohibit ads promoting “the sale or use of weapons, ammunition, or explosives. This includes ads for weapon modification accessories.” Yet there were several ads that seem to bend — if not break — those rules.

One ad, for instance, promoted a video about a “discreet” rifle that can be “assembled in seconds” and linked directly to the firearm manufacturer in the ad copy.

Meta has a history of failing to protect its users and enforce its own policies. When it comes to its role in facilitating access to dangerous firearms, the company is once again putting profits ahead of lives.