Facebook has verified the pages of multiple websites on its platform that have pushed fake news, including a website that multiple experts in the U.S. and the European Union have argued is a proxy for Russia and Russian misinformation.

Over the past year, Facebook has come under withering criticism for allowing its platform to serve as a conduit for fake news stories to spread, and for having such lax advertisement policies that a Russian company with links to the Kremlin was able to buy $100,000 worth of political ads to impact the 2016 campaign. In response, Facebook has tried to implement certain measures to fight fake news, such as employing fact-checkers and adding “related articles” that “provide additional perspectives and information on stories shared on News Feeds.” While these steps have not been as effective as Facebook hoped, the company has at least seemingly tried to crack down on fake news spreading on the site.

Yet one prominent feature of the website is undermining that effort: Facebook’s verification system. Since Facebook launched the system in 2013, the social networking giant has verified multiple pages that have pushed fake news and misinformation. Though Facebook’s policy states that the purpose of the blue check mark next to a name is simply to confirm that the page is “the authentic Page” for a “public figure, media company or brand” and that the grey check mark indicates that it’s an “authentic Page for this business or organization,” the symbols could mislead unsuspecting users into believing that the content on these pages has some legitimacy.

YourNewsWire is one of the most prominent fake news purveyors that Facebook has verified (one of the verified pages, The People’s Voice, is run by the same people who created YourNewsWire, and posts almost exclusively links to stories from the website). The website, which is run by two men in Los Angeles, has been criticized by “several British papers … as a purveyor of fake news,” as noted by The Hollywood Reporter. The Reporter also noted that one of those papers had written that the European Union’s East StratCom Task Force -- “set up to combat Russian propaganda” -- had classified the outlet as a “proxy” for Russia. Joel Harding, a former U.S. intelligence official and “Kremlin propaganda expert,” has also said that YourNewsWire has been “used by the Russians as a proxy site to spread disinformation."

YourNewsWire has repeatedly run fake news stories on its website and then posted them on its verified Facebook pages. It has published fake stories claiming that Russian troops had surrounded the U.S. border in 2016, that a dying retired MI5 agent confessed to killing Princess Diana, that a dying CIA agent confessed to blowing up the 7 World Trade Center building on 9/11, and that singer Justin Bieber had claimed the music industry is run by pedophiles. The website also made up a quote from a former Haitian government official who died this year attacking the Clinton Foundation in order to suggest that the Clintons were behind his death. Additionally, the website was one of the main players in creating the baseless Pizzagate conspiracy theory that caused a gunman to open fire inside a Washington, D.C., pizzeria; that falsity was also prominently featured on YourNewsWire’s verified pages. 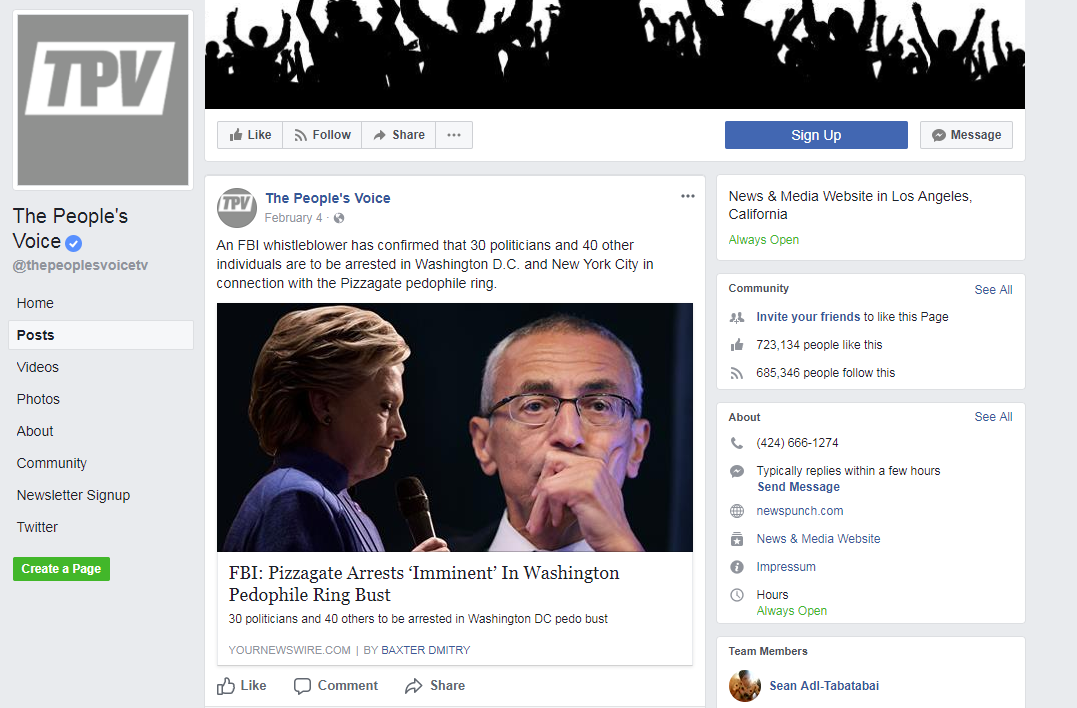 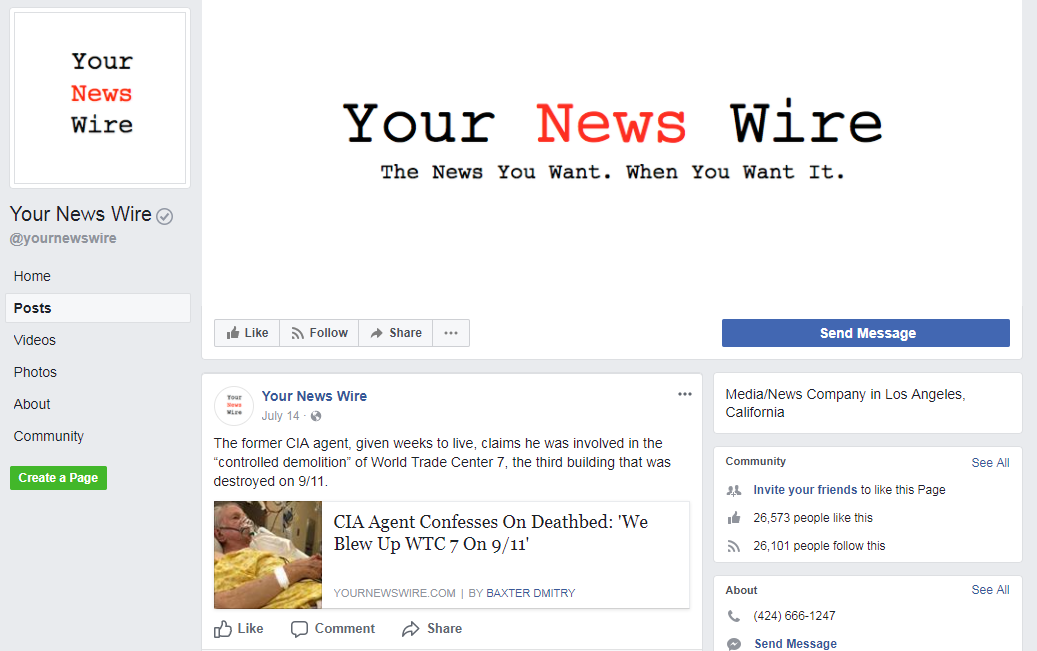 Another prominent fake news purveyor that Facebook has verified is Freedom Daily, an extremely Islamophobic far-right website that regularly pushes misinformation. Among the fake stories the website has pushed include one claiming that the Supreme Court banned Sharia law and Islam from being taught in classrooms -- which it described as a decision that “Just Pissed Off Every Muslim In America” -- and another saying that a Florida sheriff’s office is refusing to escort the Miami Dolphins unless the players stand for the national anthem. Another claimed that a federal judge ruled that CNN was “fake news” and issued a “shocking punishment” for the outlet. Freedom Daily’s Facebook page has also linked to articles from its website that smeared a Somali refugee who was running for a city council seat in Des Moines, IA, stating that the candidate was seeking the “Islamization” of the city. Another claimed that the police raided a restaurant in Minnesota “Where Obama’s Muslim Refugees Were And Made Disturbing Find Inside.” The Minnesota reporter whose real story Freedom Daily distorted called the website out for using her piece in an extremely misleading fashion. The website has also repeatedly pushed the fringe conspiracy theory that former President Barack Obama runs a “shadow government.” 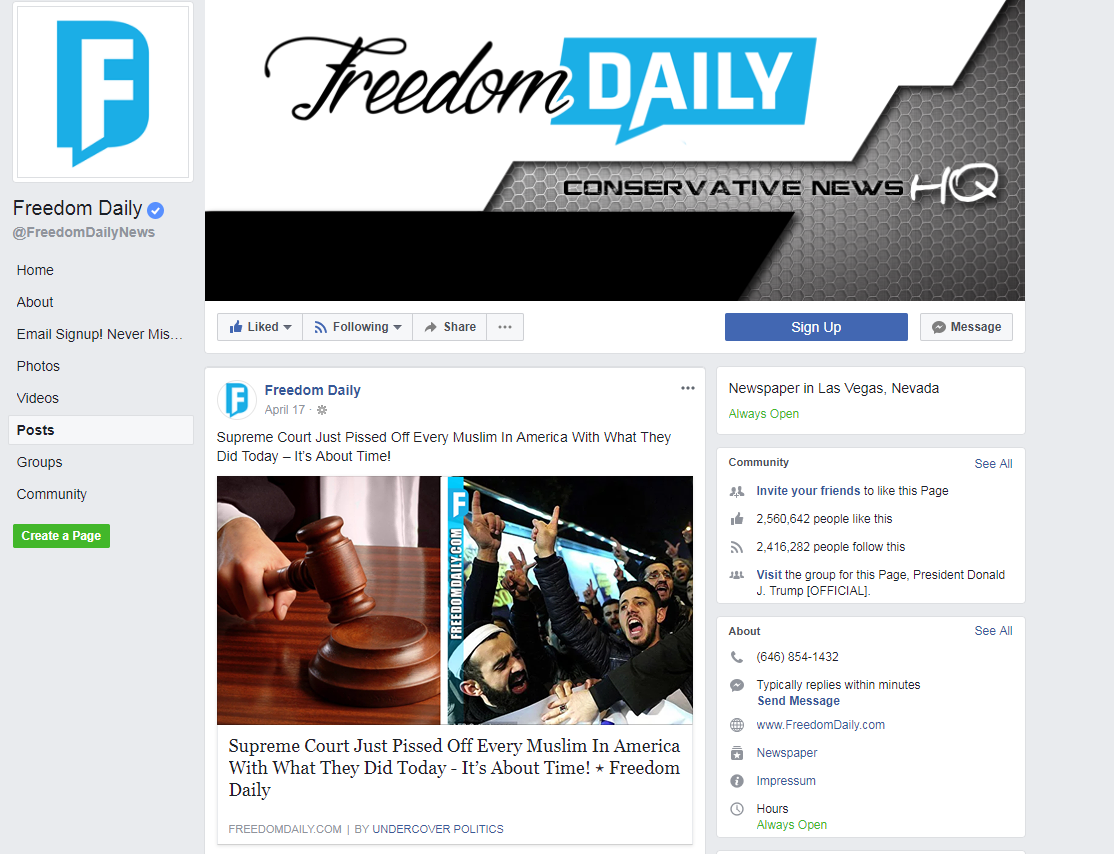 Other fake news purveyors whose pages have been verified by Facebook include:

If Facebook wants to effectively combat fake news, the company’s first step should be to stop verifying pages of websites that peddle these claims. Facebook’s failure on this front, along with other related issues, shows that the social media giant still has a serious misinformation problem.