European Union (EU) Parliament member and Fox News contributor Nigel Farage falsely claimed during an EU Parliament hearing with Facebook CEO Mark Zuckerberg that news feed changes implemented by the platform had targeted conservatives and had harmed his page’s engagement numbers. Addressing Zuckerberg, Farage said “you’ve changed [Facebook’s] algorithms, and it has led directly to a very substantial drop in views and engagements for those that have got right-of-center political opinions.” He added that President Donald Trump’s and Farage’s Facebook pages were proof that conservatives had been harmed. Trump’s 2020 presidential campaign manager Brad Parscale subsequently tweeted that he agreed with Farage “that transparency is lacking with the @facebook changes.” 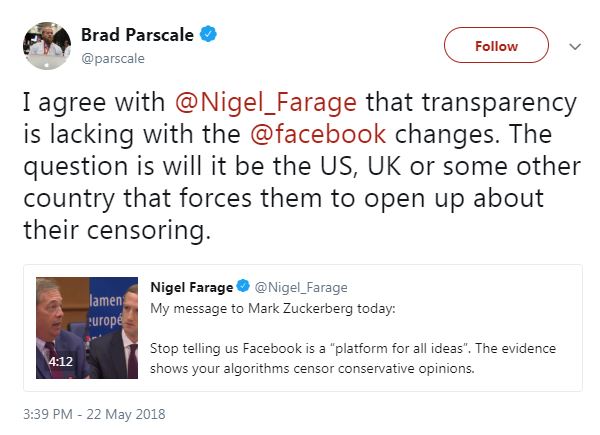 But as BuzzFeed noted, data from social media analytics platform CrowdTangle found that Farage’s page traffic had “little change” in recent months. And Farage’s claim that Facebook is targeting conservatives, a charge right-wing media have led, has been debunked by studies from NewsWhip. Nonetheless, the false right-wing media claim featuring right-wing personalities Diamond and Silk has swept conservative media and led to a congressional hearing. Facebook even gave in to this pressure and is undertaking a review led by a former Republican senator of supposed anti-conservative bias on the platform.

From the May 22 Zuckerberg hearing before the EU Parliament:

NIGEL FARAGE: Mr. Zuckerberg, I’m the largest user of Facebook in all the EU institutions in terms of followers, in terms of engagements, so I’m your best client here in the room. I have no idea of the value of that but I’m pleased to see you as I hope you are of me.

The one slight problem I have -- I’m watching very carefully the testimony that you gave on Capitol Hill. Time and again, people asked you, “Is this genuinely a neutral political platform?” And you come up with the same line again and again. It’s well-crafted. You say that Facebook is a platform for all ideas. Now historically, of course, it’s true, that through Facebook and other forms of social media, there is no way that Brexit or Trump or the Italian elections could ever possibly have happened. It was social media that allowed people to get around the back of mainstream media.

Now, perhaps you’re horrified by this creation of yours and what it’s led to, I don’t know. But what is absolutely true is that since January of this year, you’ve changed your modus operandi, you’ve changed your algorithms, and it has led directly to a very substantial drop in views and engagements for those that have got right-of-center political opinions. The facts are very clear. Just look at President Trump’s numbers. On a much smaller scale, look at mine. Look at thousands of other conservative commentators, and on average, we’re down about 25 percent over the course of this year. And that’s happening on a platform for all ideas. I am not talking here, Mr. Zuckerberg, about extremism, I’m not talking about encouraging violence, I’m not talking about hatred of anybody, I’m talking about people who have majority mainstream opinions and frankly I feel they are being willfully discriminated against.

What interests me is who decides what is acceptable? Who are these people you referred to earlier, these third-party fact checkers? Who are these people? I mean why is there no transparency in this process at all? I’m not generally somebody that calls for legislation on the international stage but I’m beginning to wonder whether we need a social media bill of rights to basically protect free speech. And I’m asking you today, very very clearly, that would you accept that today Facebook is not a platform for all ideas, that is operated impartially?