When House Republicans released the results of their investigation claiming to clear President Donald Trump of colluding with Russia during the 2016 election, the Facebook pages of several right-wing pundits posted strikingly similar thoughts at roughly the same time.

“The news we’ve all been waiting for,” remarked Sarah Palin. 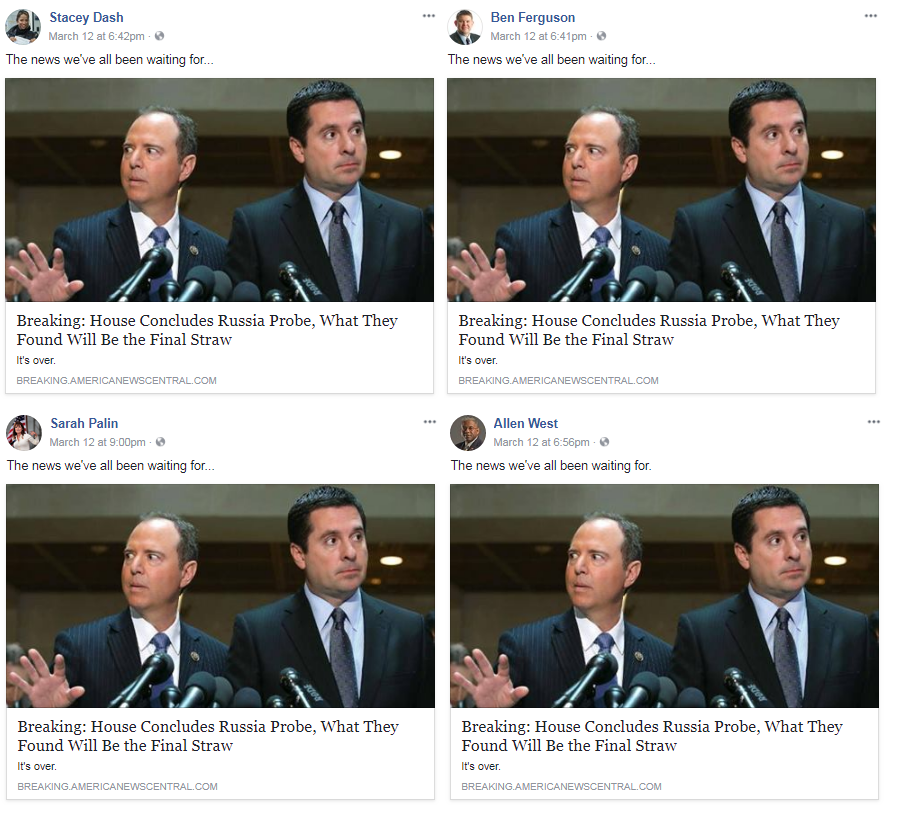 That same pattern has repeated itself for months: Pundits post identical (or virtually identical) remarks, quips, or paragraph-long commentaries, along with a link to a website owned by Young Conservatives LLC.

It’s not a coincidence. Commentators such as Dash, Ferguson, Palin, and West all have websites connected to Young Conservatives and they all regularly share the clickbait company's content. Young Conservatives' main news site is currently americanewscentral.com. If you’ve never heard of that site it's likely because it was launched in just the past few months -- and it will likely soon be defunct.

BuzzFeed’s Craig Silverman explained this month that the company has been using a practice called domain hopping, “an increasingly popular tactic of quickly hopping from one domain name to another in order to blunt the impact of Facebook’s recent News Feed algorithm changes. It’s also used by publishers as a way to stay one step ahead of blacklists used by brands and agencies to keep their ads off controversial or inflammatory websites.” He added that West's own page at allenwestblog.americanewscentral.com has already “used more than a dozen different domains with his name in them” since January 2017.

The extent of Young Conservatives’ involvement with those right-wing pundits is unclear. The company did not respond to an inquiry from Media Matters and declined an earlier request for comment from BuzzFeed about “Sarah Palin or its other partners.”

Media Matters sent requests for comment to Dash through emails listed on her campaign documents and to Ferguson, Palin, and West through website contact forms but did not hear back as of posting. (A disclaimer on Palin's Facebook page indicates that she does not personally write many of the remarks on her account, stating that posts “by Sarah Palin” are signed “SP.”)

Media Matters also sent an inquiry to the group Chicks on the Right, asking about a post on its Facebook page that included identical remarks to those of other pundits and for clarification regarding its relationship with Young Conservatives. Co-founder Miriam Weaver responded in a blog post by criticizing Media Matters and writing that it's “absolutely none of Media Matters’ business (or anyone’s, really)” whom the group works with and what financial relationships it has. She also defended the identifical Facebook post practice, stating, in part, that “we share their story the way it appears on their page, and they share our story the way it appears on our page – hence, the identical language. It’s less work that way, you see.” From Chicks on the Right's post (emphasis in original):

Here’s the deal. Once a day, usually sometime in the evening hours, we share a post from our friends, the Young Conservatives, on our Facebook page, which we and ONLY WE manage. They, in turn, share one of our posts on their Facebook page. It’s a lovely partnership – one that allows us to cross-promote with our respective audiences. It costs us nothing to share their posts, and it costs them nothing to share ours. It’s a mutual swap, if you will. Once a day. And we share their story the way it appears on their page, and they share our story the way it appears on our page – hence, the identical language. It’s less work that way, you see. It appears, from the OH-SO-SCANDALOUS link that Media Matters included in their email, that the Young Cons have similar relationships with other folks as well. Good for them, I say. I love to see conservatives helping each other out. The more the conservative message gets out to the masses, the better!

One of the most frequent cut-and-pasters is Republican political commentator Stacey Dash. She has continued to post links to Young Conservatives content even though she’s running for Congress in California and her Facebook page is connected to her campaign website.

The posts push conservative tropes and sometimes veer into vitriol. For instance, Dash, Ferguson, and West have repeatedly criticized and mocked the survivors of the February 14 mass shooting at Marjory Stoneman Douglas High School in Parkland, FL. 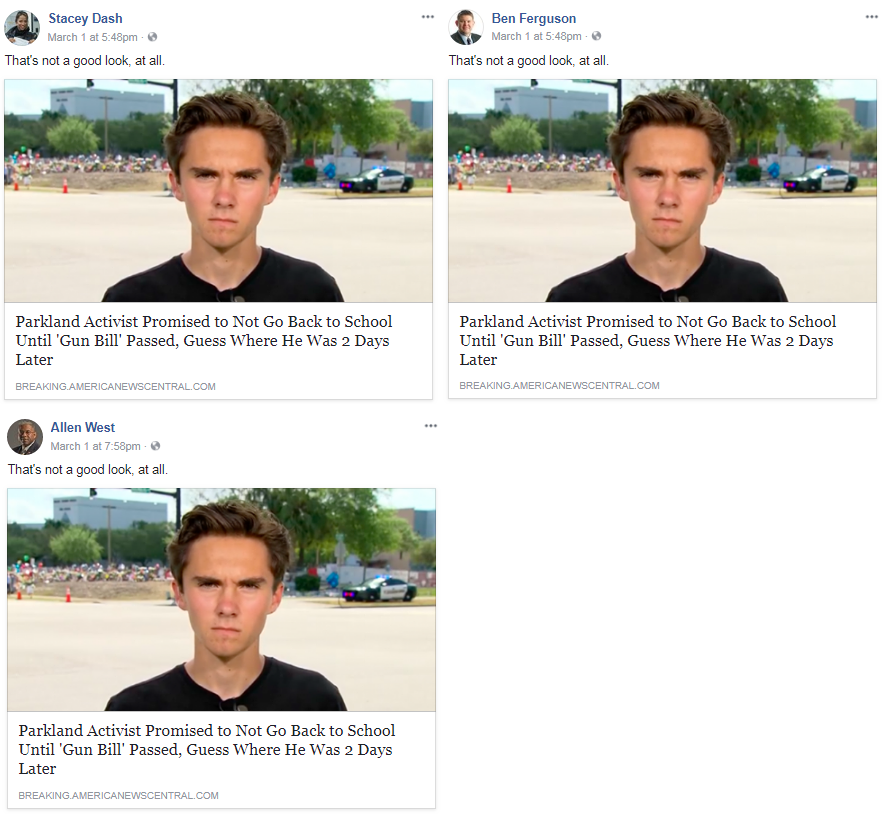 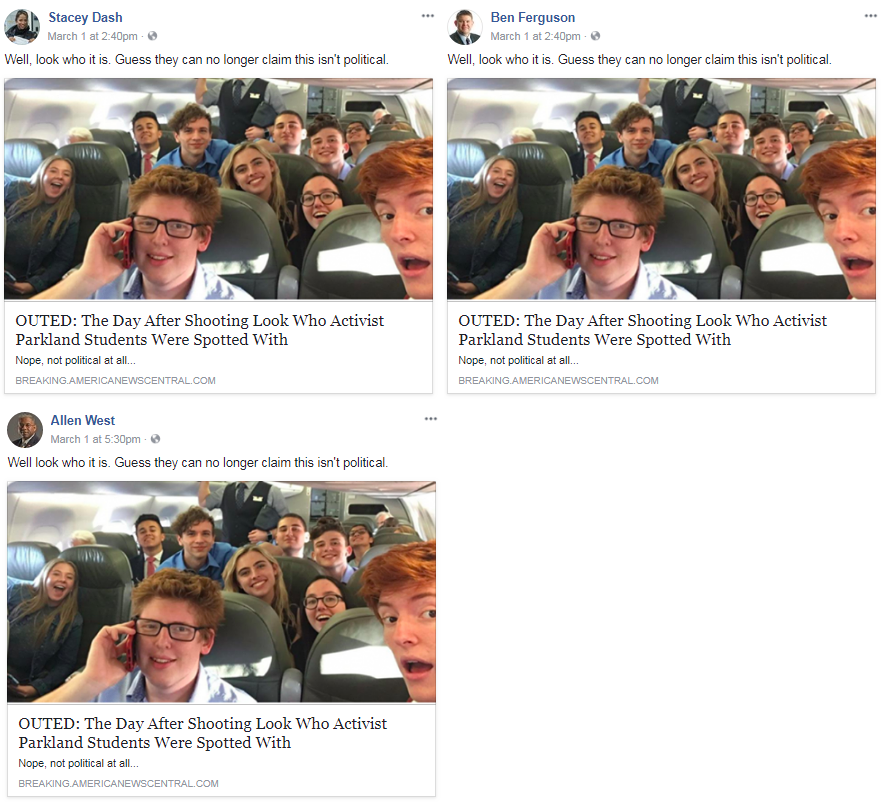 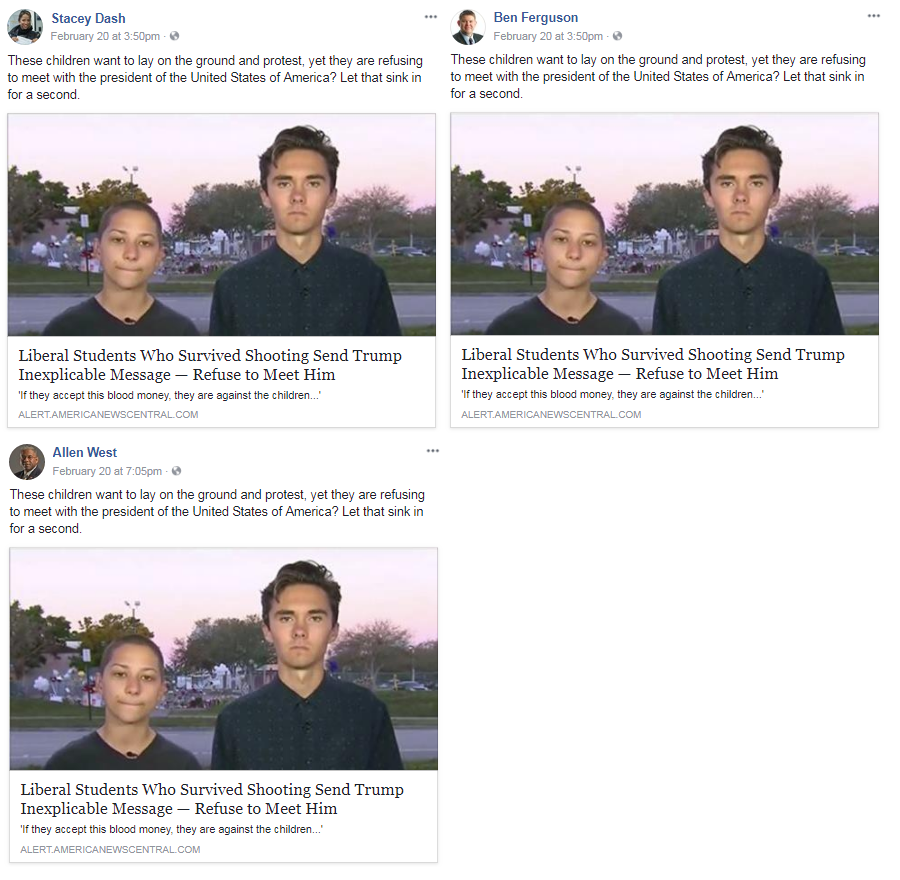 Here are some of the many examples of identical remarks from Young Conservatives-affiliated pundits.

Dash, Ferguson, and West had the same reaction to an NFL story: 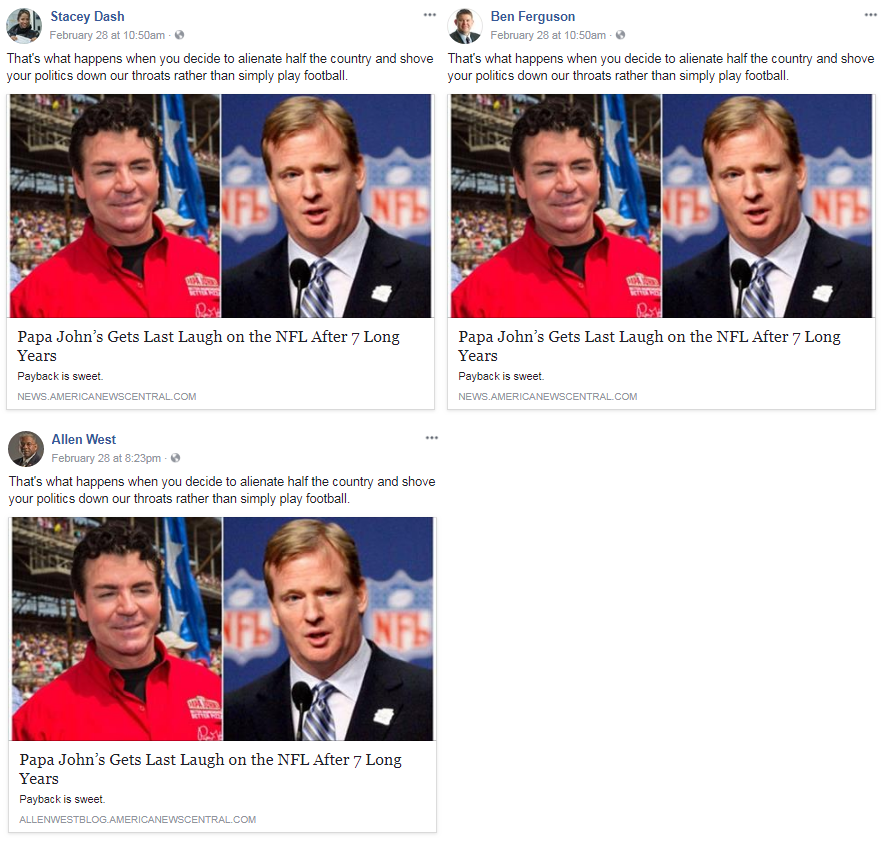 Dash, Ferguson, and West had the same “Yeehaw!” reaction to a federal court ruling: 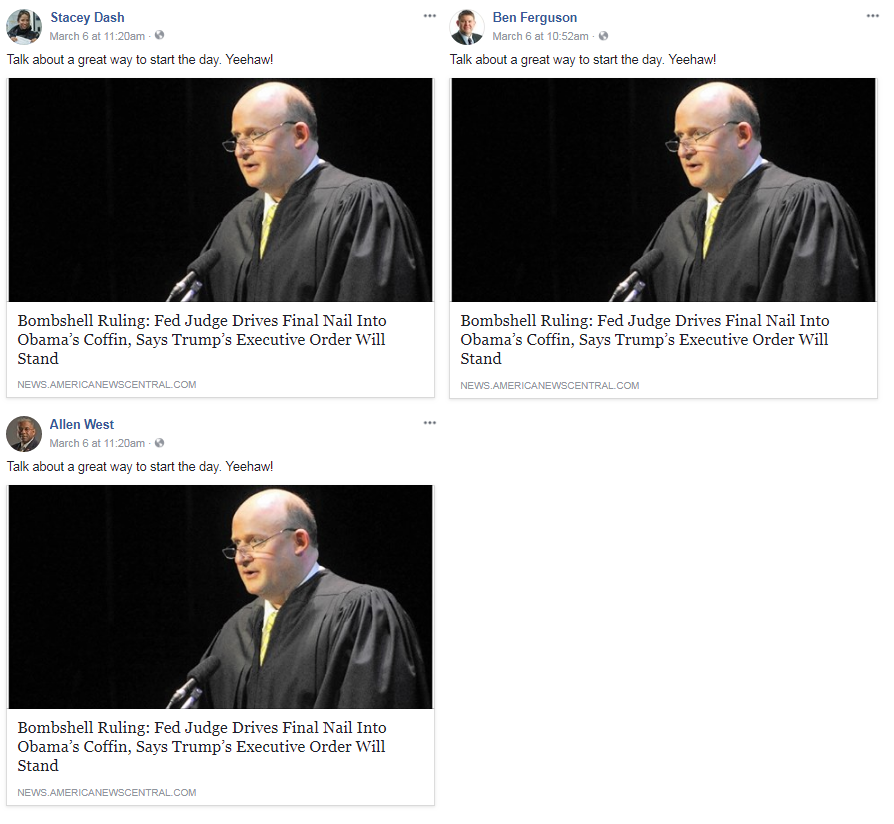 Chicks on the Right, Ferguson, and Palin had the same two-sentence reaction to a court decision about California. West, however, opted to use “isn't a good idea” instead of “isn't panning out.” 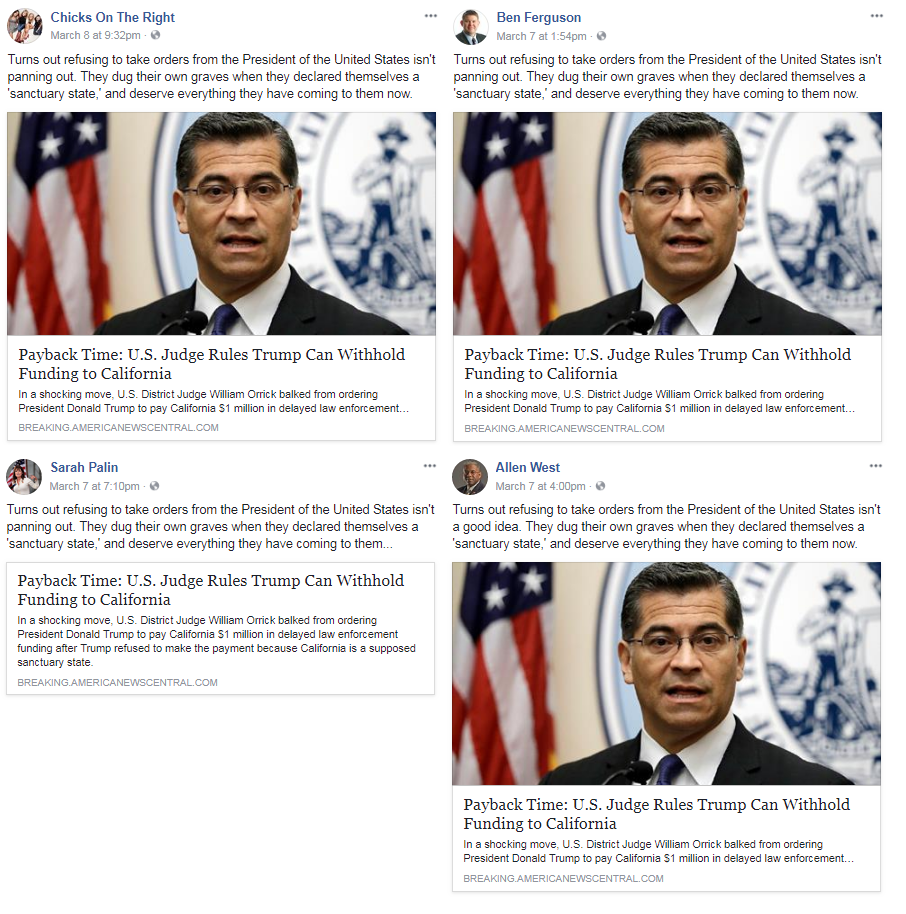 And here are Dash and Ferguson doing an “insert sarcasm here” joke just one minute apart:

Even purported first-person posts are cut and pasted across different accounts. Here are Dash and Ferguson making an observation about the Parkland shooting at the same time:

Here are Dash and Ferguson writing about Enterprise Rent-A-Car at the same time:

And here they are talking about Trump:

To be fair, their posts are not always identical. When Dash and Ferguson claimed they may have found themselves a new church, Ferguson opted not to include the word “freaking”: