Since Central American migrants fleeing poverty and violence slowly began making their way toward the U.S. southern border in a series of caravans, right-wing sources have dominated viral caravan content and coverage on Facebook and YouTube. A Media Matters study of Facebook and YouTube between October 13 and November 19 found that a majority of the caravan content with the most interactions came from right-leaning sources.

Among all sources analyzed in this study, Fox News had the most top-engaged Facebook links and page posts as well as the most caravan-related YouTube videos with over 100,000 views. On air, the cable network dedicated over 23 hours to caravan coverage in the first two weeks after the first caravan set off on October 13, and its reports often spread anti-immigrant disinformation and conspiracy theories.

Similarly, viral right-leaning caravan coverage on Facebook was riddled with anti-immigrant false news. On YouTube -- where far-right misinformation thrives -- some of the right-leaning channels dominating caravan-related video content were news aggregators run by sources that we could not verify, and others featured “alt-right” and far-right personalities.

Sixty-four percent of the Facebook page posts about the migrant caravan with the most interactions came from right-leaning Facebook pages.

Of the 267 caravan-related Facebook posts with the most interactions, 171 were posted by right-leaning pages. Fifty-one of these posts came from Facebook pages without any political alignment (19.1 percent) and 45 came from left-leaning pages (16.9 percent). 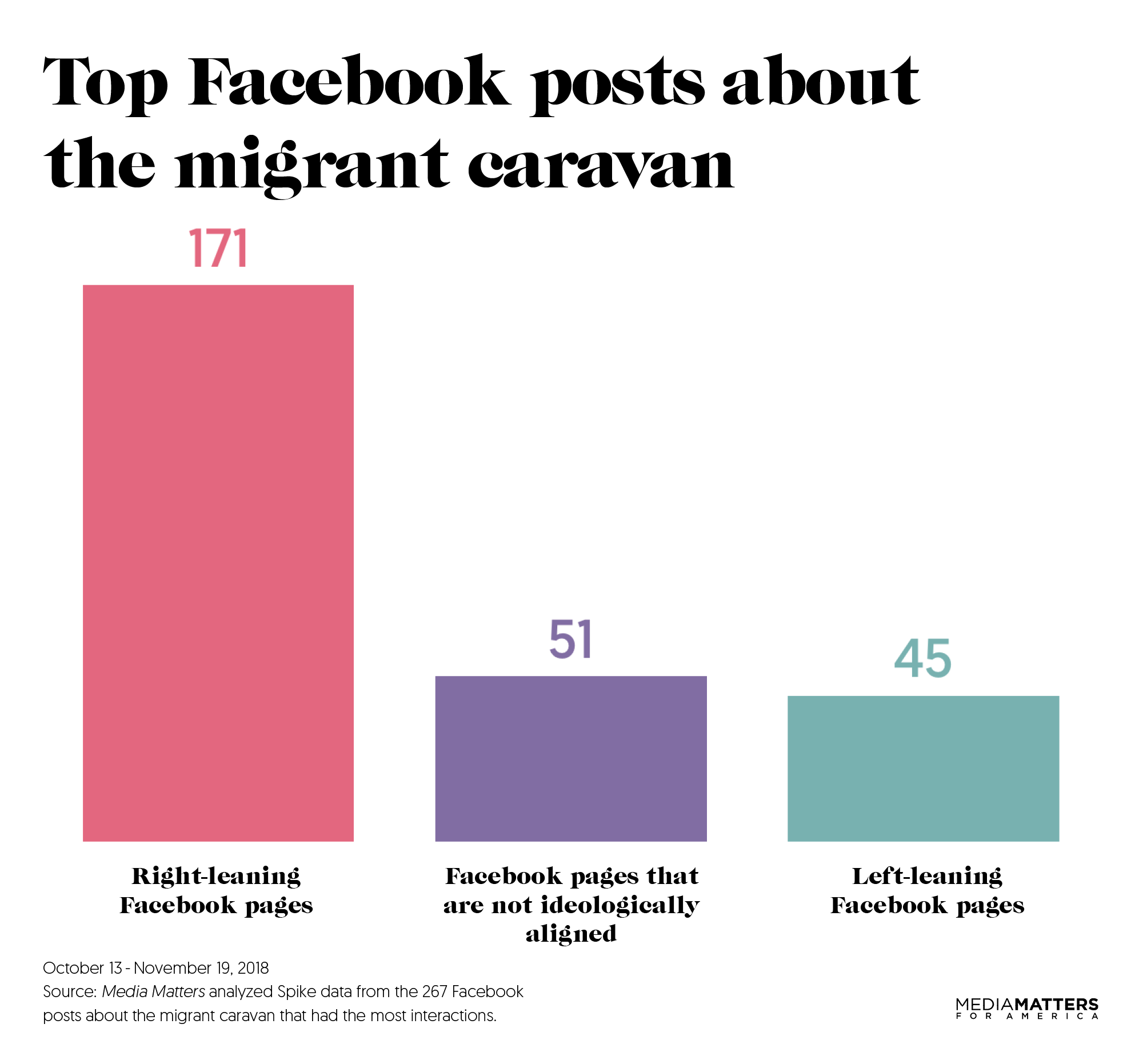 During the 38 days analyzed, Fox News’ main Facebook page had by far the highest number of posts with high engagement related to the migrant caravan, with 42 such posts (compared to the second highest number,the page of right-leaning The Daily Caller, which had 18 page posts). Nine of the 13 pages with five or more viral posts related to the caravan came from right-leaning sources. These right-leaning pages were Fox News, The Daily Caller, Ben Shapiro, Breitbart, Patriots United, ForAmerica, American Voices, Judicial Watch, and Conservative Tribune. 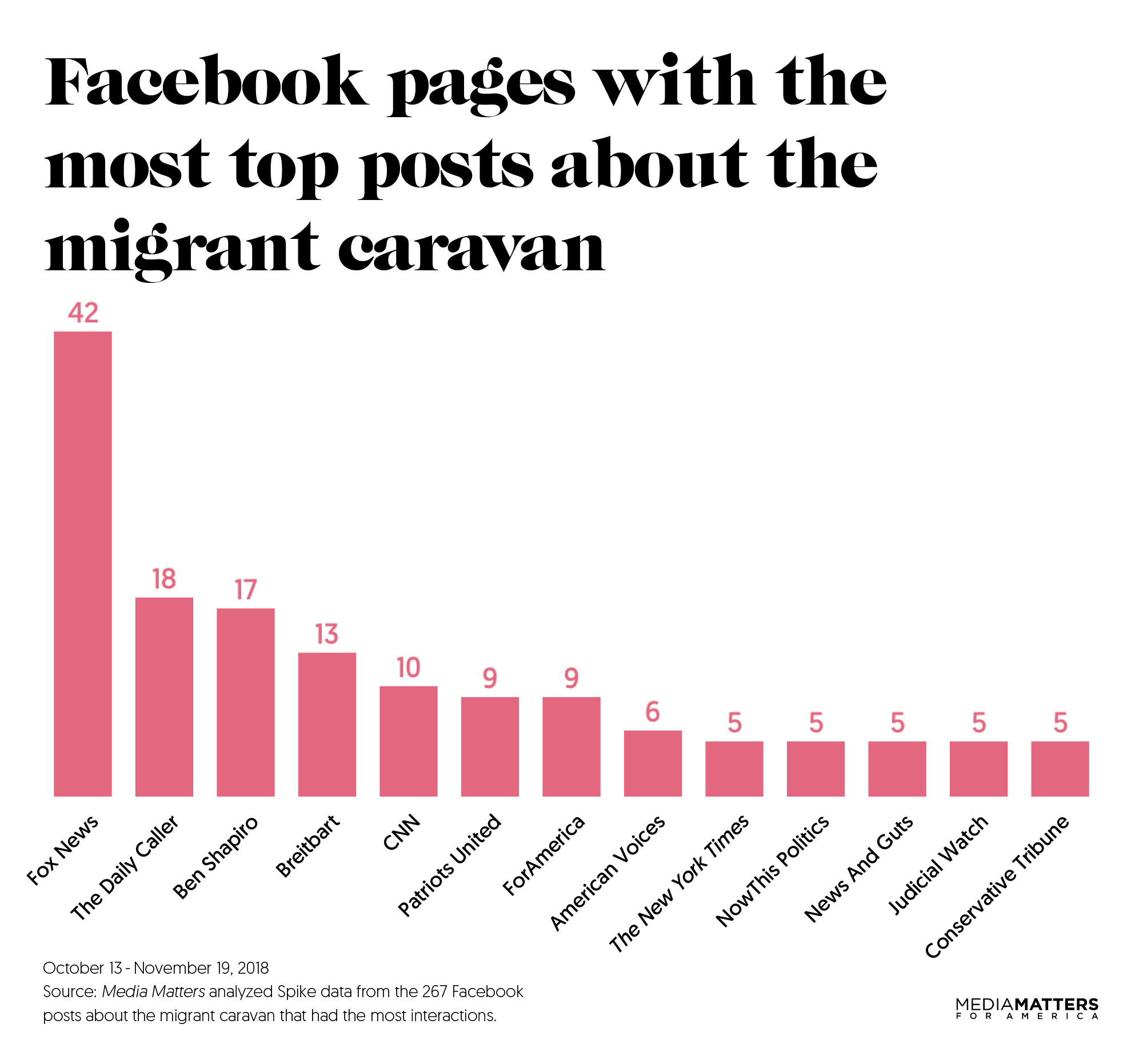 Viral content from right-leaning Facebook pages often depicted the migrant caravan as a violent invasion. The Facebook page American Voices, a channel on Facebook’s streaming service Facebook Watch, is run by the right-wing media outlet The Daily Caller and had multiple viral video posts that spread misinformation on the caravan and painted migrants as violent or criminal.

The most popular caravan post from American Voices, which has earned over 100,000 interactions and 5.8 million views, is a video that called the caravan a “potential crisis” and stoked fear about a supposed lack of defenses on the border. The video also misrepresented a fence on a specific part of the southern border as that area’s only “defense against the caravan.” Other viral videos from American Voices: falsely speculated that some members of the caravan weren’t from Central and South America; associated migrants and asylum seekers in the caravan with drug smugglers; and featured a clip of a Fox News guest calling the migrant caravan’s journey an “invasion and an act of war.”

Other viral posts from right-leaning pages spread baseless right-wing conspiracy theories about the nationality of members of the caravan and painted the caravan of migrants and asylum-seekers as an “invasion.”

Eleven times as many top links about the caravan on Facebook directed users to right-leaning websites as to left-leaning sites. 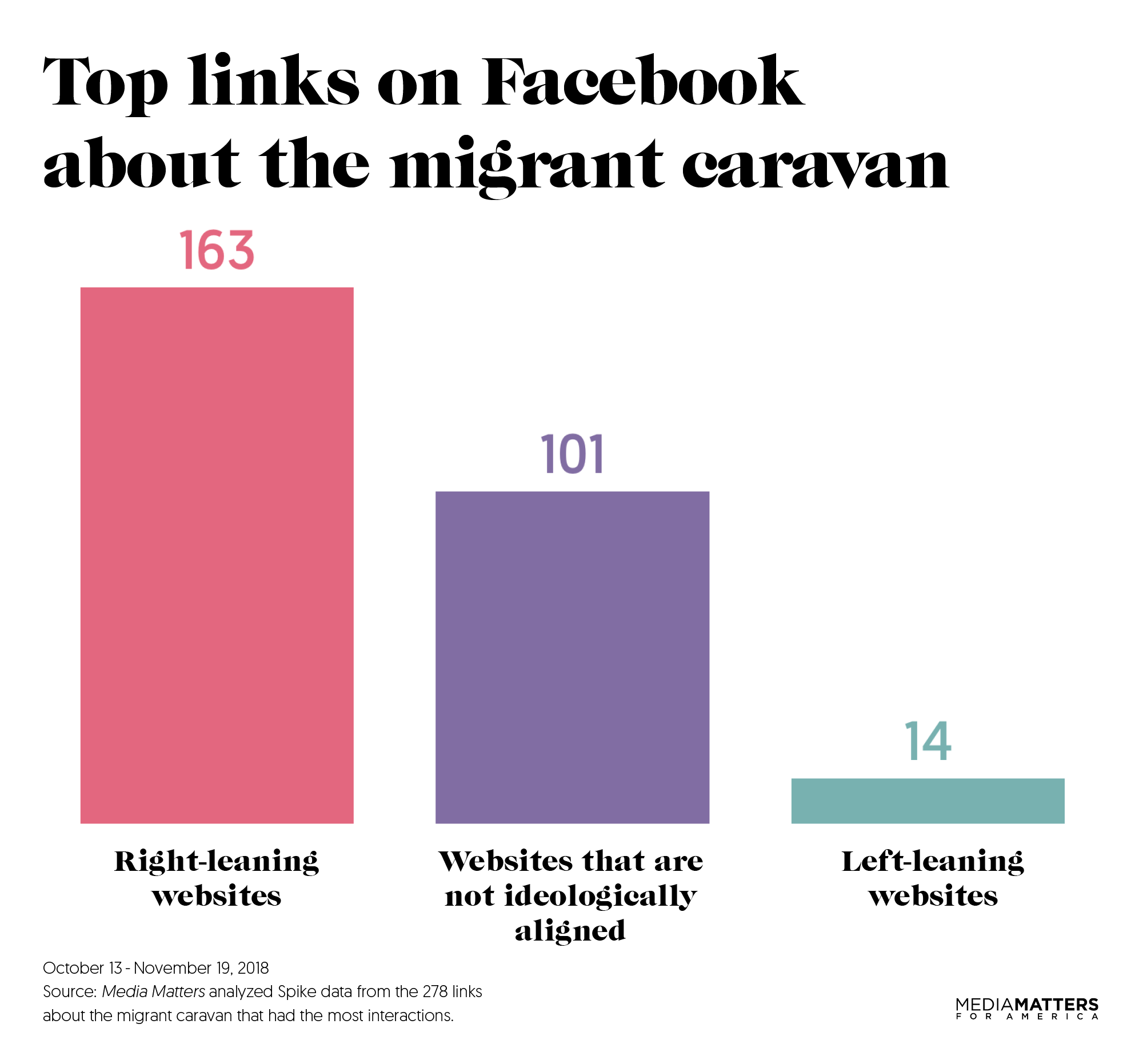 As with Facebook pages, right-leaning websites made up the majority of domains with numerous top links to caravan-related content. Fox News once again topped caravan coverage on Facebook, with 32 top-performing links. Seven of the 12 domains with the most links in our study belonged to right-leaning outlets. The top right-leaning outlets were Fox News, Daily Wire, Breitbart, Western Journal, The Daily Caller, American Military News, and The Washington Times. 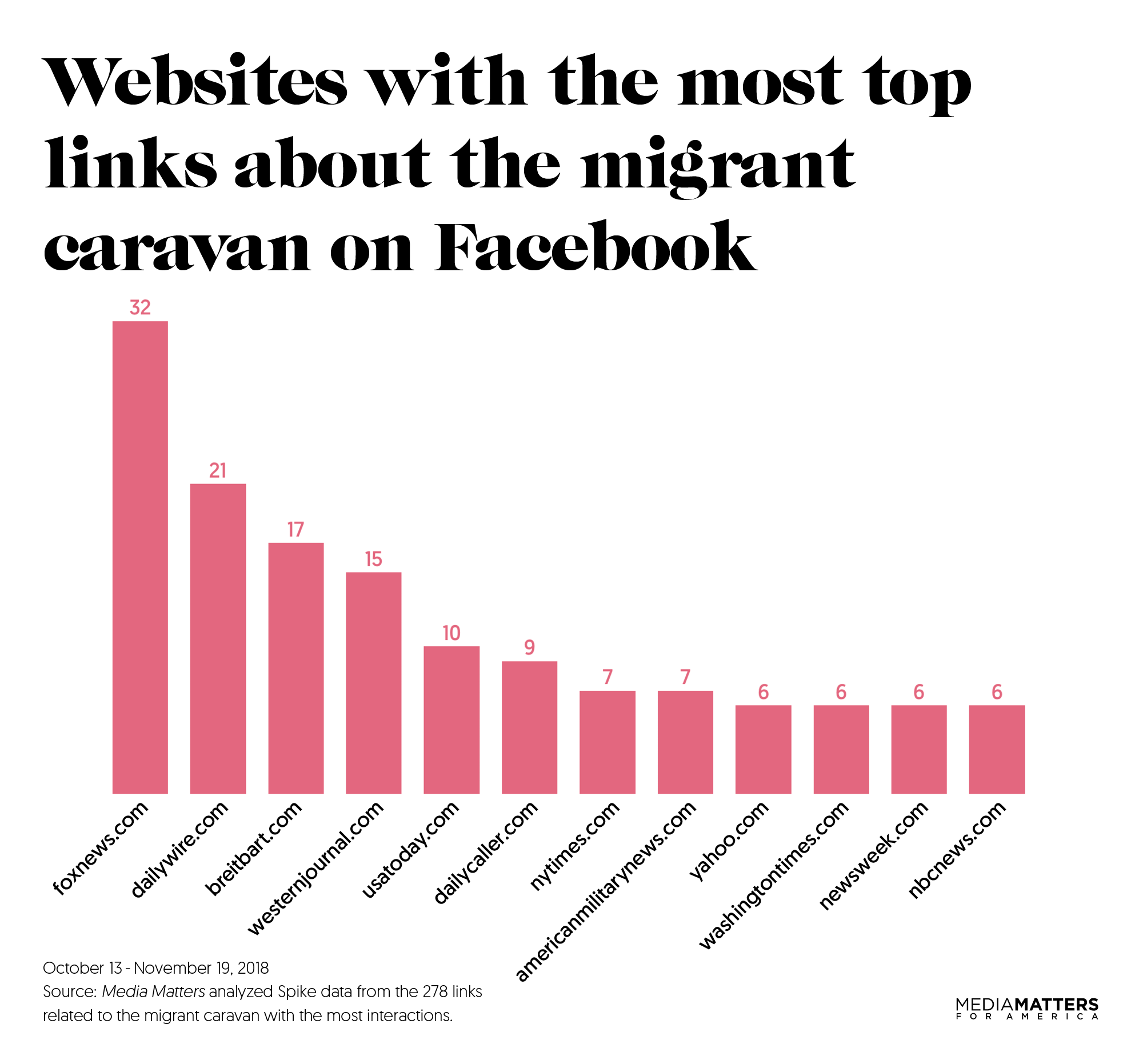 Some top links from right-leaning websites advocated for violence on the border against migrants and asylum-seekers, characterizing them as invaders. On Glenn Beck’s personal site and his outlet The Blaze, he penned an article titled “This is not a caravan, it’s an INVASION.” In it he claimed that the caravan was a “political stunt” to provoke violence from the National Guard and Border Patrol. Links to both earned over 50,000 interactions on Facebook. In a Fox News op-ed, political contributor and former Speaker of the House Newt Gingrich wrote that the caravan was “attempting to invade and attack the U.S.,” and he called on the president and Congress to stop the “attack.” The op-ed earned almost 48,000 interactions on Facebook.

The right-wing group Judicial Watch had multiple top links on Facebook that spread anti-immigrant conspiracies, including: an article falsely stating that the caravan poses a “serious public health threat”; one calling members of the caravan “gangbangers”; another calling the caravan a “movement that’s benefiting human smugglers”; and one article speculating that ISIS terrorists could be part of the caravan. All of these articles earned over 40,000 interactions on Facebook, with the most popular post earning over 84,000 interactions.

A majority of popular YouTube videos about the caravan were posted by right-leaning channels. Unverified far-right and “alt-right” channels were some of the most popular sources. 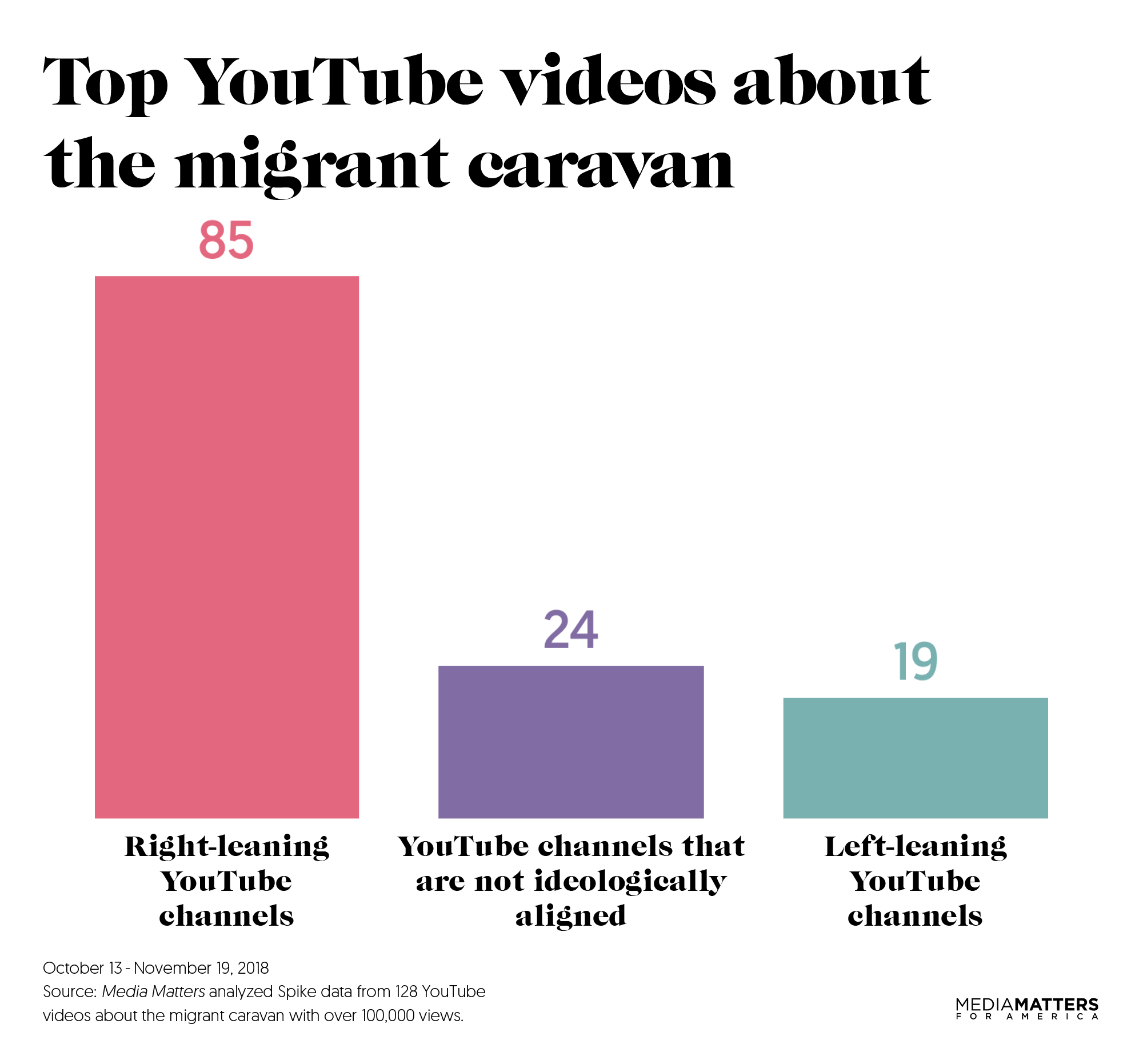 Fox News’ YouTube channel posted the highest number of top-viewed videos about the migrant caravan, with Fox Business’ channel coming in third. The YouTube channel with the second highest number of top-viewed videos was kylekuttertv, with 14 caravan-related videos earning over 100,000 views apiece. Kylekuttertv is an unverified news aggregation channel, whose typically 30- to 60-minute videos feature a compilation of mainstream, right-wing, and fringe YouTube news clips framed under far-right and conspiracy-theory narratives, which are detailed in the video titles and descriptions. 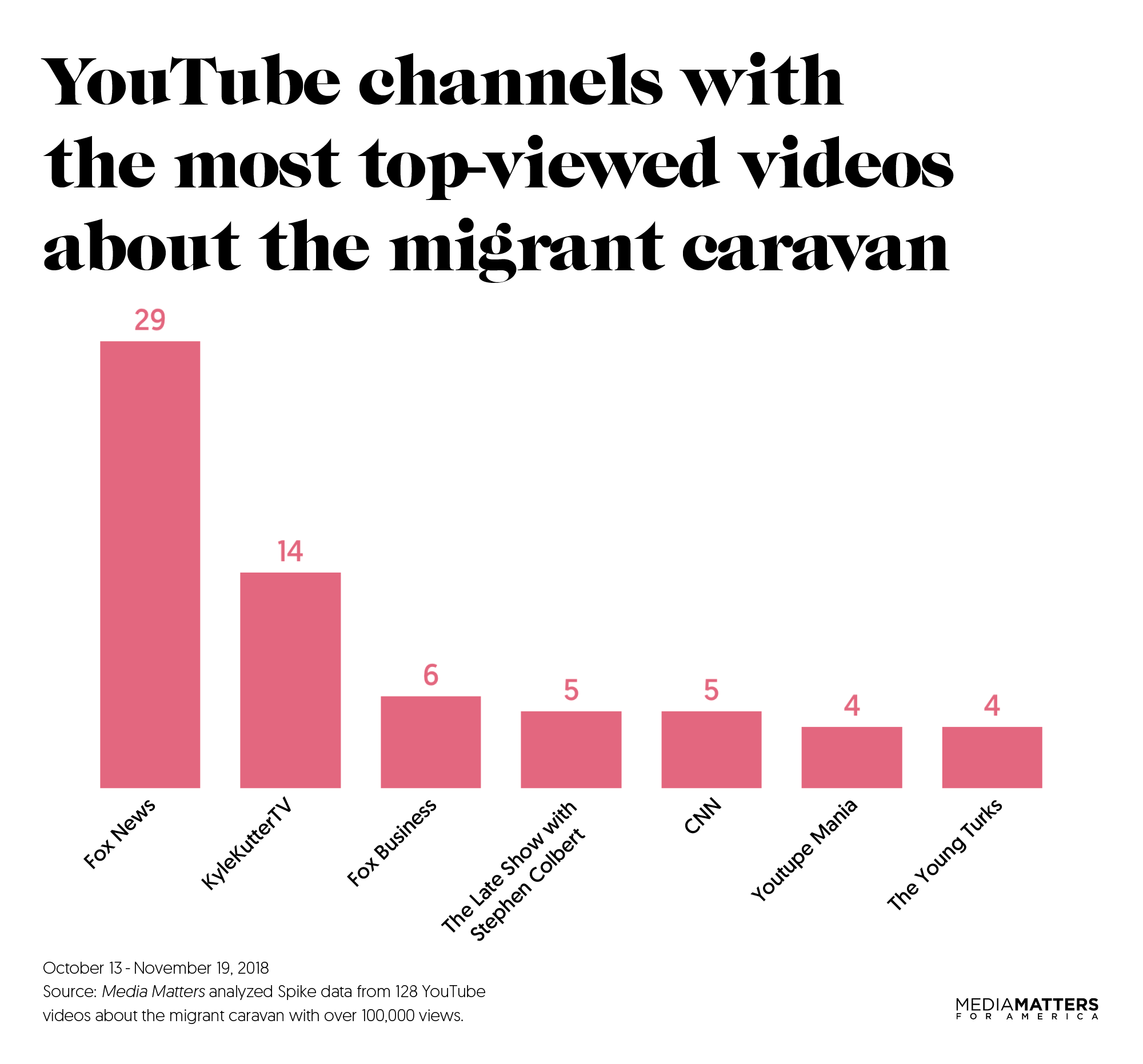 Another unverified right-leaning news aggregation channel, GLOBAL News, had multiple top-viewed videos. GLOBAL News and kylekuttertv have each earned tens of millions of views, and they paint themselves as nonpartisan channels, while almost exclusively mixing clips from local media outlets with right-wing commentary from outlets including Fox News, NewsMax TV, and One America News Network.

Far-right and “alt-right” sources also had top-viewed YouTube videos on the caravan. The channel belonging to the far-right Canadian outlet Rebel Media published three videos about the caravan that each earned over 100,000 views on YouTube. In one video, Rebel Media host Ezra Levant speculates about whether caravan members have “antifa-style or paramilitary-”style training, and then he goes on to say that migrants and asylum-seekers in the caravan are not claiming to be “refugees fleeing from danger” and are “just looking to, you know, get rich, I suppose.” In addition, numerous vloggers linked to the “alt-right” -- including Stefan Molyneux, James Allsup, and Tarl Warwick (known online as Styxhexenhammer666) -- all had top-viewed videos on YouTube in which they stoked fear about the caravan.

Other right-wing media figures also used YouTube to spread false news and conspiracy theories to stoke fear about immigrants. On his YouTube channel, former Fox host Bill O’Reilly falsely implied that George Soros funded the migrant caravan. In a video from The Blaze that earned over 500,000 views, Glenn Beck falsely stated that Venezuela financed the migrant caravan and then speculated that Cuban and Venezuelan spies and terrorists could be using the caravan as a “cover” to enter and attack the U.S.

Using Newswhip’s social media monitoring program Spike, Media Matters searched for links published online between October 13, 2018, and November 19, 2018, that included the word “caravan.” We arranged search results on Spike in order by the amount of Facebook interactions they had and exported data for the 300 links with the most interactions. We repeated this search method for posts from Facebook pages, exporting data for the 284 Facebook page posts with the most interactions. For YouTube data, Media Matters used Spike to search videos containing the words “caravan” and “migrant,” “immigrant,” or “immigration” posted between October 21 and November 19 and exported data for the 300 videos with the most views. (These additional words were used for the YouTube search to avoid the many false positives the word “caravan” produced.) Because Spike limited the time frame for a YouTube search to 30 days due to YouTube’s terms of use, Media Matters conducted a manual search on YouTube on incognito mode using the same search terms to supplement the results excluded from Spike’s narrower time frame. We excluded videos with fewer than 100,000 views on YouTube from the study.

Researchers then reviewed sources and coded them as either “left-leaning,” “right-leaning,” or without political alignment. For Facebook page data, the source coded was the Facebook page. For links on Facebook, the domain of each link was coded. And for YouTube videos, the channel was coded.

Most sources had been previously coded as part of an earlier Media Matters study, and we used the previous political-alignment codes for those pages. For new sources, two researchers independently coded each link, Facebook page, and YouTube channel. We determined the ideological alignment of a source by considering the source’s name and published content. Sources that expressed opposition to President Donald Trump or focused on issues primarily aimed at liberals (e.g., protecting abortion rights, calling for action against gun violence, etc.) were coded as left-leaning. Sources that expressed support for Trump or focused on issues primarily aimed at conservatives (e.g., restricting abortion rights, downplaying gun violence, etc.) were coded as right-leaning. All right-wing and left-wing media outlets and organizations were automatically coded as right-leaning or left-leaning, respectively. Pages that did not have an ideological leaning in their content were coded as nonaligned. Coding conflicts were resolved between the two researchers with available information about the source’s political alignment.