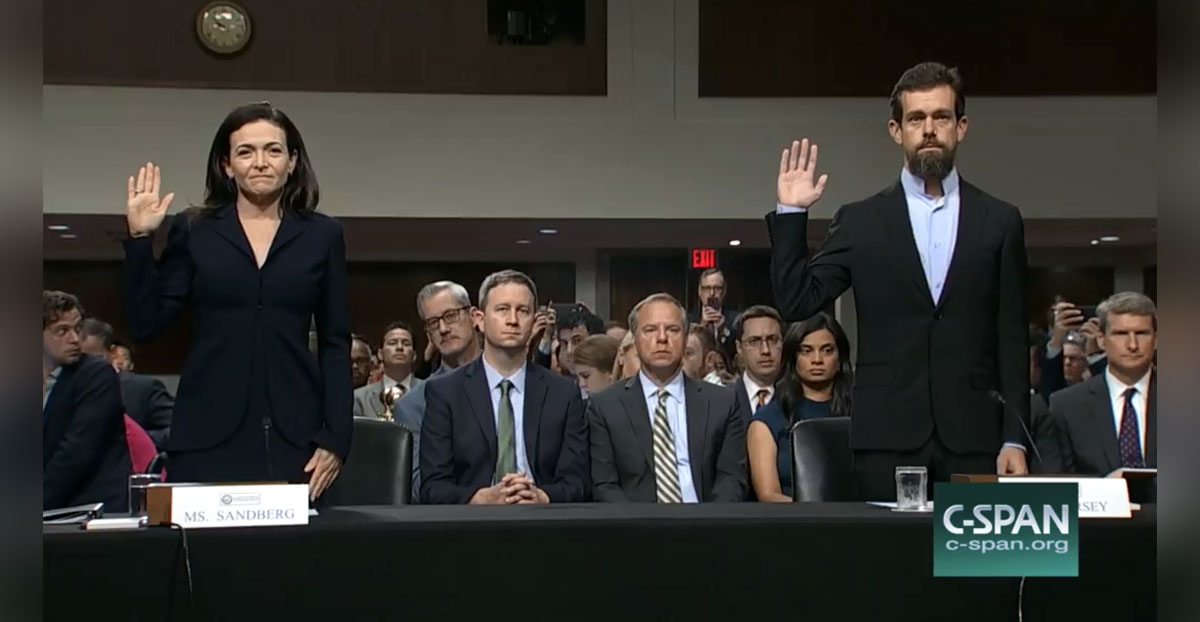 This morning, the Senate intelligence committee questioned Facebook COO Sheryl Sandberg and Twitter CEO Jack Dorsey on Russian interference in the 2016 election. The hearing was the culmination of a two-year investigation into Russian election interference by the committee and Congress’ best opportunity to publicly hold Facebook and Twitter accountable for their role in allowing Russian operatives to game their platforms to target Americans with propaganda. As Angelo Carusone said earlier: “The tech industry’s failure to grapple with its roles in allowing -- and sometimes even enabling -- the fake news crisis and foreign interference in American elections is a national security crisis.” Today Americans had the opportunity to hear from Sandberg and Dorsey directly what Facebook and Twitter have done to protect them since 2016.

The first time tech executives from Facebook, Twitter, and Google testified before the Senate intelligence committee last year, committee members took a hostile posture. Committee chair Richard Burr (R-NC) and vice chair Mark Warner (D-VA) both scolded Facebook, Twitter, and Google for not taking election interference or the fact that their platforms were weaponized by foreign propagandists, seriously. At one point, Warner, frustrated by how little the tech companies claimed to know about what was happening on their own platforms said, “Candidly, your companies know more about Americans, in many ways, than the United States government does. The idea that you had no idea any of this was happening strains my credibility.”

Ten months later, as I watched Dorsey and Sandberg testify before the committee, it felt like relations had thawed -- perhaps not with Google, who refused to send its CEO and instead was represented by an empty chair, but certainly with Facebook and Twitter. Members of the committee continued to ask tough questions and press Dorsey and Sandberg when they weren’t forthcoming, but the atmosphere had changed. I get the sense that after nearly a year of conversations and hearings, the working relationship is perhaps in a better place.

Of course the tech companies have taken a beating in the press since that first hearing. We’ve since learned that Russian trolls got tens of thousands of Americans to RSVP for actual local events via Facebook. Americans have now seen the thousands of ads and organic content that Russian propagandists deployed on Facebook. Conspiracy theories about the Parkland shooting survivors, most of whom were still minors, spread like wildfire on social media. News broke that Cambridge Analytica had breached data of at least 50 million Facebook users. Russia is still interfering in our political conversation, and, Iran is now gaming the platforms as well.

This morning’s hearing was probably the last time we’ll hear from the tech companies or the committee before the midterm election. Here’s what we’ve learned (and what we still don’t know):

Facebook and Twitter made a lot of promises to the committee in the 2017 hearing. Facebook and Twitter both promised to change their ad policies, enhance user safety, build better teams and tools to curb malicious activity, better collaborate with law enforcement and one another, and communicate more transparently with the public.

For every question Sandberg and Dorsey answered during the hearing, there were plenty that they couldn’t or wouldn’t answer. Most of the time, they promised to follow-up with the committee but here’s what we still don’t know and won’t likely get an answer to before the 2018 elections:

Burr and Warner generally close these hearings by previewing what happens next. This time there was no such preview. Given that the election is almost two months away, that’s a bit unsettling. But the reality is that with the current makeup in Congress (and the executive branch), the government isn’t going to do anything else to protect Americans. No legislation will be passed, and if social media companies are called to testify before the House again anytime soon, it will likely be another circus hearing devoted to the right’s pet issue of social media censorship. On the Senate’s part, however, holding tech companies accountable and producing reports is about as much as the intelligence committee can do right now.

Facebook, Twitter, and the absentee Google left today's hearing with questions unresolved and problems nowhere near fixed. Beyond the Senate Intelligence Committee asking pertinent questions, Congress has shown no interest in holding social media companies to account for those issues that remain outstanding.