Right-wing meme pages on Facebook have been propagating a smear campaign targeting two women, Christine Blasey Ford and Deborah Ramirez, who reported that Supreme Court nominee Brett Kavanaugh sexually assaulted them and other survivors of sexual assault. Media Matters looked at memes posted by right-wing meme pages on Facebook between September 16 and September 26 and mapped out a timeline of major narratives related to Kavanaugh and sexual assault. We found a disinformation campaign that used false news and smears about Ford -- as well as sexual assault jokes, attacks against women who report assault, and calls to support Kavanaugh -- in order to downplay the reports of assault.

In the three days after The Washington Post named Ford as the author of the confidential letter reporting Kavanaugh for sexual misconduct, memes from right-wing meme pages attacking Ford and spreading false news painting her as a Democratic plant went viral. Memes tried to cast doubt on Ford’s allegations by questioning her timing in coming forward, claiming her allegations are “unprovable,” and challenging her recollection of events.

A photo misidentified as a shot of Ford depicted her as a left-wing activist. Another photo of an activist misidentified as Ford spread the same day on other right-wing social media and websites, including The Daily Caller, which irresponsibly amplified it. Right-wing social media accounts frequently characterized Ford as a liberal “activist” or “plant,” with those comments often accompanied by false claims about Kavanaugh’s mother’s involvement in her parent’s foreclosure case; fabricated statements about Ford’s drinking habits and sexual partners; and false claims that her brother is connected to Fusion GPS and thus the Russia investigation. 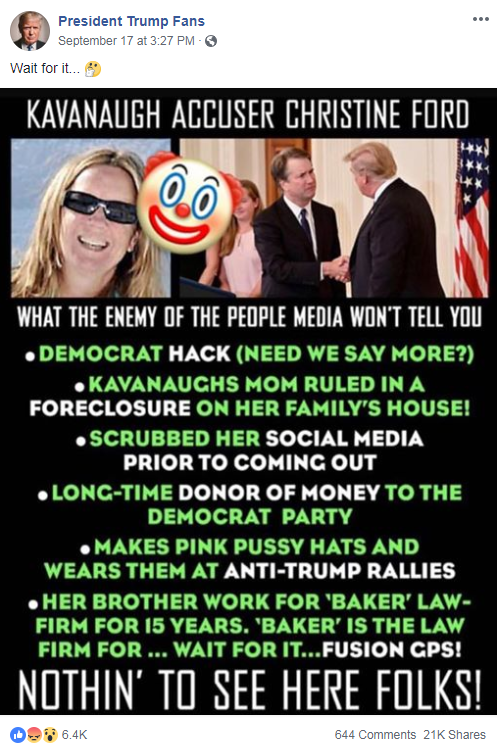 After the first wave of smears against Ford went viral, memes and engagement bait rallying support for Kavanaugh spread on Facebook.

Memes smearing and belittling Ford (some of them containing false information) continued going viral and reaching massive audiences on a daily basis between September 16 and September 26. But right after the first big wave of viral smears ended around September 18, a new crop of memes supporting Kavanaugh emerged. These memes contained generic messages of support for Kavanaugh, without detailing specific defenses for his actions. (Along with this batch of posts rallying the Republican base, a meme calling for Sen. Dianne Feinstein (D-CA) to apologize to Kavanaugh and resign spread on right-wing Facebook pages.) 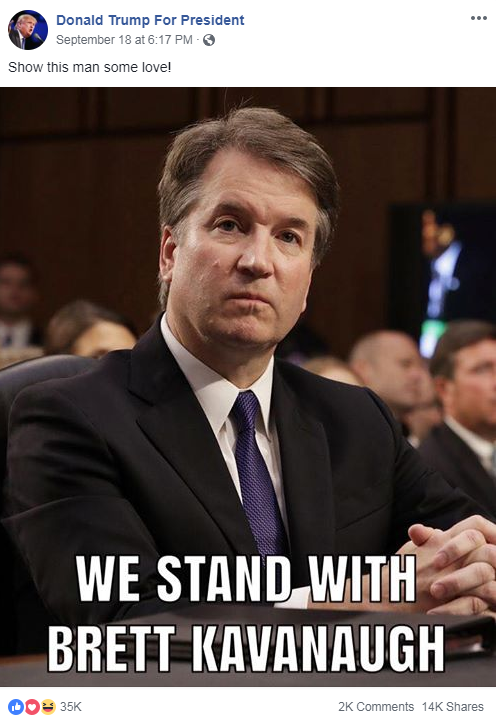 Since reports of sexual misconduct by Kavanaugh came out, jokes trivializing sexual assault have been rampant on right-wing Facebook pages.

Some of the jokes in these memes allude to Ford’s and Ramirez’s reports of assault by mocking the timing of the allegations and accusing Ford and Ramirez of having political motives. Some memes included pictures of young boys or babies touching women or girls, joking that the boys in the picture would never be able to pursue a political career. One of the most popular memes in this disinformation campaign used anti-trans rhetoric to justify blatant sexual misconduct. It earned over 129,000 interactions, and right-wing pundit Ned Ryun even adopted its language on Twitter. 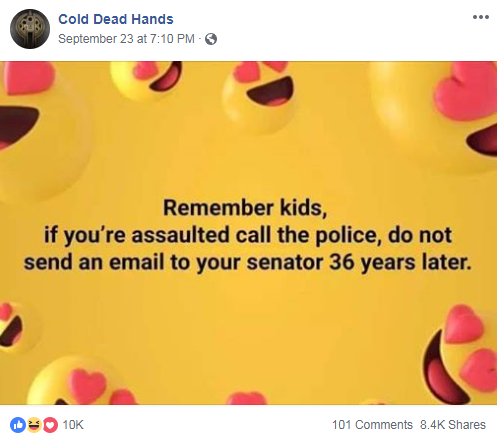 The specific disinformation campaign against Ford and Ramirez was about discrediting survivors of sexual assault in general.

Before the first smear against Ford went viral on right-wing meme pages, a meme asking followers if women should face criminal charges for making false rape allegations earned over 30,000 interactions on Facebook. Throughout the week, other right-wing meme pages reposted the meme (which had also been recycled through the right-wing social media ecosystem before the reports came out about Kavanaugh). Multiple memes about false sexual assault allegations, most of which encouraged criminal charges against women who file allegedly false reports, went viral this week in conjunction with memes attempting to discredit Ford and Ramirez. Some memes shared by multiple pages used the true story of Brian Banks, a football player falsely accused and convicted of rape, to ask followers: “Should women go to jail for false rape accusations?” Family Research Council fellow Ken Blackwell posted a meme (which was shared by another right-wing page) questioning whether women who falsely testify under oath about sexual assault should face criminal penalties. In the status text of the post, Blackwell mentioned Kavanaugh. 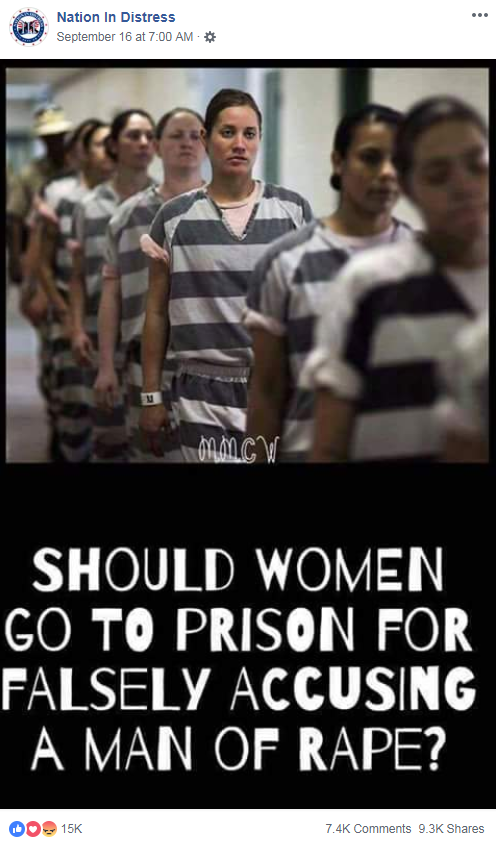 Right-wing meme pages also shared a set of memes pushing the idea that mothers should be afraid that false accusations could target their sons. A network of accounts on Facebook and Instagram connected to the fake news site The Political Insider shared a meme with the text: “Every mother of boys should be terrified that at any time, any girl can fabricate any story without proof and ruin their lives.” Six other right-wing meme pages shared a similar meme, all of them writing Feinstein’s D.C. office number in the status text and urging readers to call the senator. Another meme that right-wing pages posted and that spread through pro-Trump and far-right Facebook groups using the hashtag #HimToo stated: “As long as women who accuse men of sexual attacks are believed without evidence or due process, no man is safe.” One meme posted by Conservative World Daily featured a picture of Kavanaugh and used similar rhetoric, painting him as a victim. 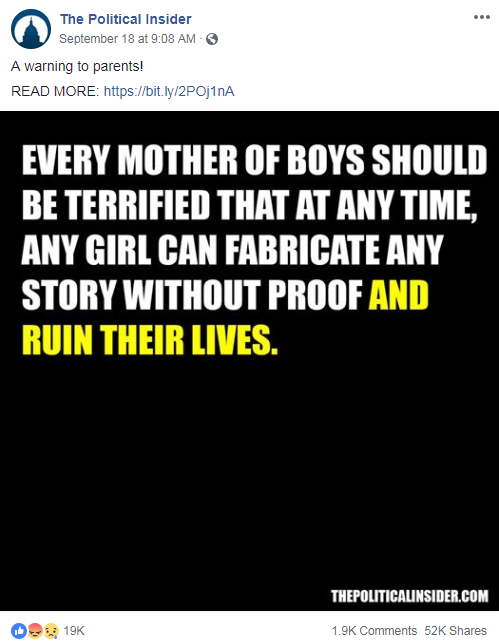 Most of these memes about hypothetical men facing hypothetical allegations referenced “boys” rather than “men.” The characterization of alleged perpetrators as young people overlaps with the sexual assault jokes centered on male children inappropriately touching women or girls. These references to youth play into the right-wing narrative that Kavanaugh’s age at the time of the reported assaults should mitigate the reports of sexual misconduct.

This meme disinformation campaign on Facebook attempted to downplay the severity of sexual misconduct reports made against Kavanaugh and discredit Ford before she testified to the Senate Judiciary Committee.

One post referenced Ford and Ramirez as “Democrat women,” but no viral memes from this disinformation campaign directly targeted Ramirez. Even after The New Yorker published Ramirez’s report, the most frequent target of viral memes in this disinformation campaign was still Ford, who was often referenced by name or alluded to by mention of details pertaining to her report. The meme pages thus focused on discrediting the individual who was set to testify in Kavanaugh’s confirmation hearing rather than other individuals who have brought forth reports of sexual assault or who have supported Ford’s report.

At the same time, right-wing meme pages have woven their smears of Ford and support for Kavanaugh into larger narratives that mock and downplay sexual assault altogether and try to discredit all survivors.