Earlier this month as the House of Representatives passed H.R. 1, also known as the For the People Act, right-leaning Facebook pages earned nearly 2.9 million interactions on posts that pushed false narratives, used extreme language, and fearmongered about the bill -- particularly its provisions to expand voting rights.

On March 3, the House passed H.R. 1 after two days of debate and other proceedings. The bill is a major election reform measure that would strengthen and expand voting rights protections, help prevent gerrymandering, and promote increased campaign finance transparency.

Media Matters analyzed just over 1,500 Facebook posts about the For the People Act that were published by political pages between March 1, when proceedings started, and March 12, and found that right-leaning pages earned nearly 2.9 million interactions (reactions, comments, shares) on nearly 630 Facebook posts.

Posts from right-leaning pages earned roughly the same interactions as posts from left-leaning pages and received over eight times more interactions than posts from ideologically nonaligned pages. Although right- and left-leaning pages achieved relatively similar engagement, the narratives dominating Facebook echo those of conservative media. These narratives include fearmongering against the legislation, falsely casting the bill as a corrupt attempt by Democrats to seize power from Republicans and state legislatures, and misrepresenting key aspects of the bill.

The top 10 posts from right-leaning pages about H.R. 1 offer insight into the narratives being pushed on Facebook to their millions of followers. Although some of these posts reported on the bill without commentary, the majority of top right-wing posts used extreme language or fearmongered about provisions that would enfranchise more voters, such as automatic voter registration and restoring voting rights for felons who have completed their sentences.

Here are seven Facebook posts from right-leaning pages’ top 10 posts about H.R. 1 that are pushing false narratives and fearmongering:

Posts fearmongering about the bill, particularly provisions that would increase voting rights

Fox News host Sean Hannity warns that Rep. Ayanna Pressley (D-MA)’s failed amendment to H.R. 1 to lower the minimum voting age is “not a joke,” adding, “This is real.” 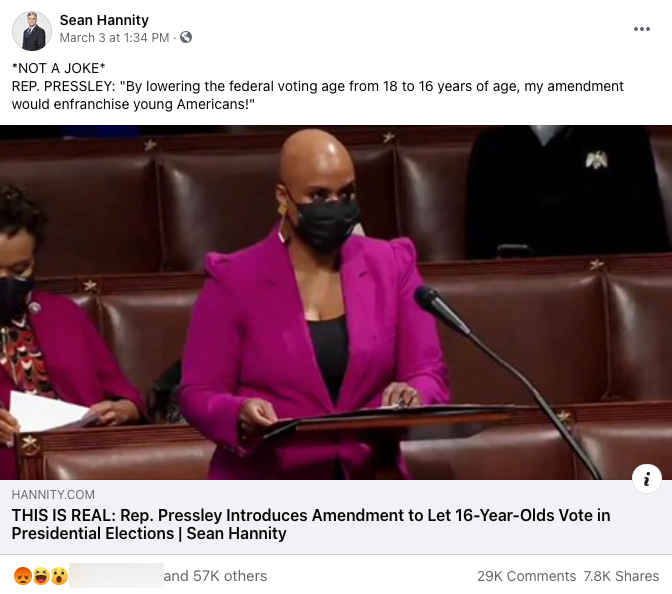 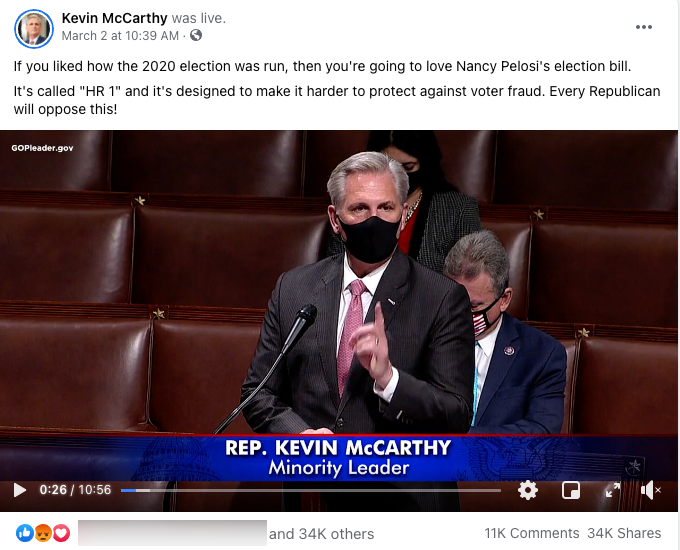 The Daily Caller says the bill is “chock-full of surprises” and fearmongers about the supposed threat of so-called “ballot harvesting.” 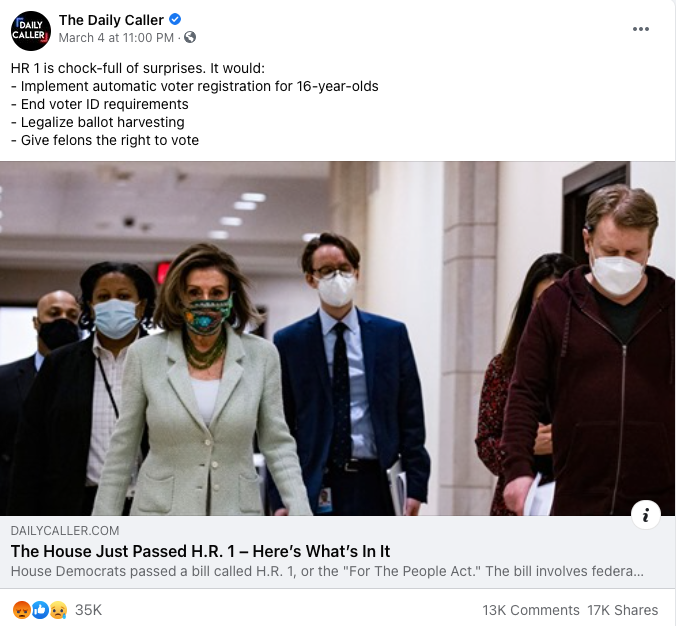 Posts using extreme language, such “unconstitutional” or “radical,” to describe the bill

Right-wing media personality Dan Bongino claims “we are in big trouble” and the bill would “change America’s elections forever.” 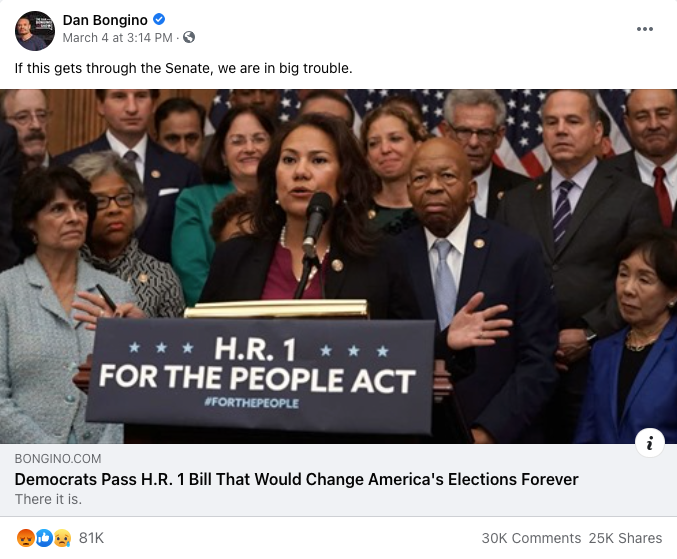 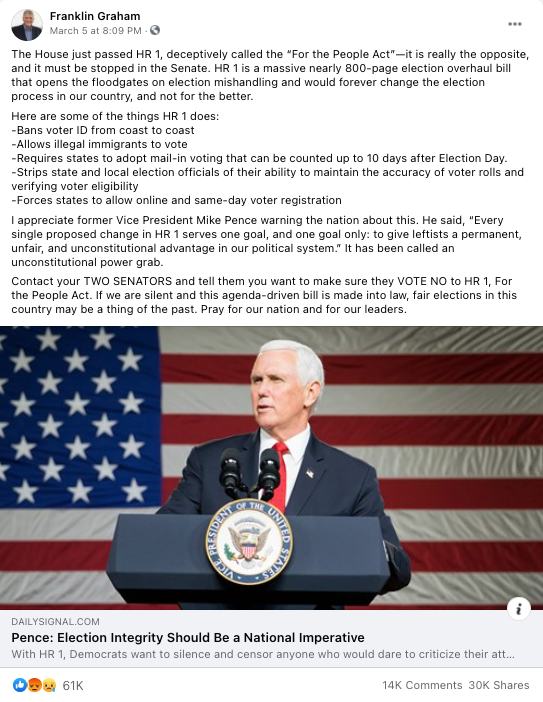 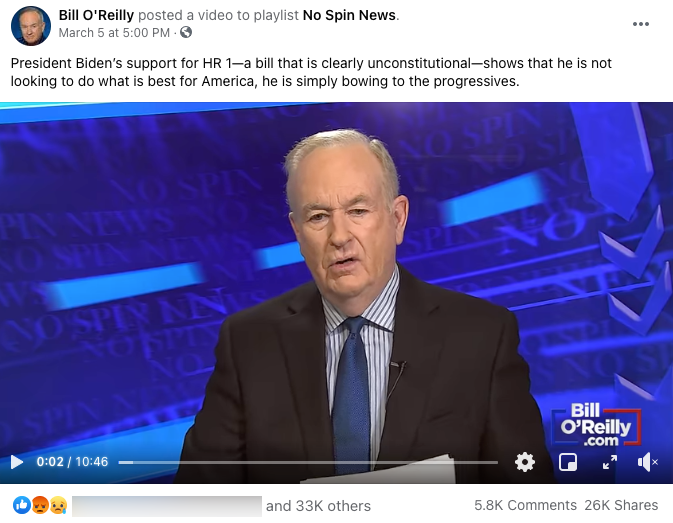 In a Fox News post, Sen. Lindsey Graham (R-SC) calls the bill, along with the coronavirus relief plan and the Equality Act, “a trilogy of radical policy.” 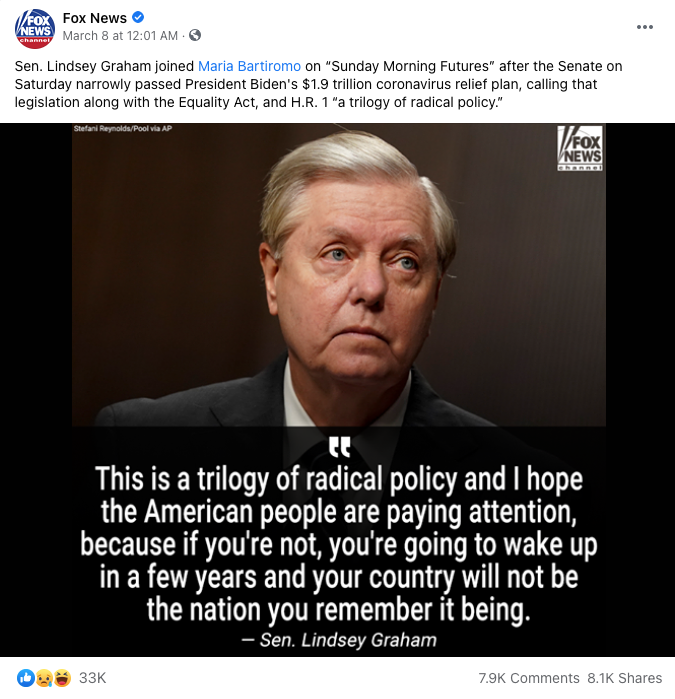 Using CrowdTangle, Media Matters compiled a list of 1,773 Facebook pages that frequently posted about U.S. politics from January 1 to August 25, 2020.

For an explanation of how we compiled pages and identified them as right-leaning, left-leaning, or ideologically nonaligned, see the methodology here.

We reviewed the data for the resulting 1,508 posts, including total interactions -- reactions, comments, and shares -- using CrowdTangle.