A Media Matters study found that Facebook pages of some mainstream conservative media outlets, Republican media figures, and even apolitical clickbait sites are part of promotional campaigns involving websites with a history of promoting anti-Islam fake news and conspiracy theories.

Fifteen of the pages that posted the links were verified with blue or gray badges, meaning Facebook has verified that the page is “the authentic Page or profile for this public figure, media company or brand” (blue) or that it is “an authentic Page for this business or organization” (gray).

Liftable.com, which Liftable Media describes as a site for “uplifting and inspiring stories,” has posted articles vilifying Islam as a violent religion. One article on the site claimed that “Islam has been on a bloody rampage to conquer, convert or kill the world since 620 A.D.” Another said that the Quran “orders every follower to conduct their lives with violence and brutality, butchering all who refuse to convert and comply.”

The third Liftable Media site, Conservative Tribune, has the most extensive history of spreading viral fake news against Muslims. A review of data from Crowdtangle shows that the site’s anti-Islam content has generated over 1.5 million Facebook impressions. The site has falsely claimed that Sharia was being implemented in Dearborn, MI, and it pushed similar fake news claiming that Muslims were attempting to establish a Sharia court in Irving, TX. Conservative Tribune also showed support for Irving residents who deployed intimidation tactics against Muslim residents, including people armed with AR-15s who protested outside a local mosque and released the names of Muslims living in the area.

For over a year, Conservative Tribune also pushed viral debunked conspiracy theories about Ahmed Mohamed, a 14-year-old student from Irving who was arrested after bringing a clock to school. In multiple articles, Conservative Tribune suggested that Mohamed was a “pawn” in an orchestrated stunt that his father staged in order to make “fake” accusations of “Islamophobia.”

Conservative Tribune baselessly suggested that Mohamed was involved with terrorists. One article suggested a potential connection between Mohamed and a mosque he “grew up near” in Dallas, which Conservative Tribune claimed faced allegations of terrorist financing. Another implied it was suspicious that “innocent” Mohammed was invited to visit Qatar by “an organization with strong ties to the Muslim Brotherhood.” Yet another said: “If you’re a terrorist, what better role model than Ahmed ‘Bomb Clock Boy’ Mohamed?”

After Mohamed’s family filed a civil suit against the city and school district, Conservative Tribune attacked Mohamed for “stabb[ing] his school, his town and his country in the back.”

Recently, Conservative Tribune attacked Broward County Sheriff Scott Israel, saying he “cozied up to [a] terror group” just because Israel hired a member of the civil rights advocacy group Council on American-Islamic Relations (CAIR). Conservative Tribune has an extensive history of smearing CAIR and falsely claiming it is a terrorist group involved with Islamic indoctrination and efforts to impose Sharia.

Liftable Media has been expanding its presence in conservative media.

Liftable Media is owned by Patrick Brown, whose father, Floyd Brown, founded WesternJournalism.com. Floyd Brown is a Republican consultant with a history of promoting racist conspiracy theories through political ads. According to Newsweek, Patrick runs Liftable Media’s four main websites, Conservative Tribune, The Western Journal (formerly known as Western Journalism), Liftable.com, and the sports news site The Wildcard, and Floyd, who is chairman of Liftable Media’s board of directors, helps provide funding for the company. Before starting Liftable Media in 2014, Patrick worked for an organization his faither chairs, The Western Center for Journalism (WCJ). Patrick is listed on WCJ’s site as a “trainer,” as are far-right figures James O’Keefe and Joseph Farah of WorldNetDaily.

Liftable Media has acquired various other hyperpartisan sites, including the now-inactive Tea Party News Network and USA Radio Networks (Floyd is the latter’s current CEO). Most recently, Liftable Media acquired Liberty Alliance, a media company that ran a membership network of conservative and fake news sites. In a press release on the acquisition, Liftable Media stated that Liberty Alliance would “expand Liftable Media’s reach by an additional 2 million Facebook followers.”

There are at least 74 Facebook pages that have shared Conservative Tribune links using UTM codes between January 2018 and April 2018.

UTM codes are parameters that can be added to a URL in order to track web traffic from a specific source on Google Analytics without changing the destination of the URL. There are four types of parameters (source, medium, content, and campaign), and labels for each parameter are customizable and trackable by whoever is running a website domain. The tool is used by companies to track the source of traffic to a specific page on their site (Facebook, Twitter, email newsletters, et cetera).

A Media Matters study of Conservative Tribune’s Facebook traction between January 2018 and April 2018 found 74 pages posting links to conservativetribune.com that used UTM codes that included the name of the page or company behind it -- indicating someone was tracking the traffic from that page/company. Of the 74, seven pages had over 2 million page likes; 11 had between 1 and 2 million page likes; and an additional 12 had over 500,000 page likes. Thirty-eight of these pages seemed to be operated by Liftable Media, based on the UTM parameters used and the pages’ “About” sections. Many of the other 36 pages seemed to be separately operated by a combination of marketing companies, clickbait sites, and the personal pages of Republican figures including former Arkansas Gov. Mike Huckabee, Fox News contributor Herman Cain, former Arizona Gov. Jan Brewer, and conservative commentator Dick Morris.

These are the Facebook pages sharing Conservative Tribune links with UTM codes:

Thirteen of these pages are blue-badge verified, some of which belong to Republican figures and organizations.

Thirteen of the pages posting links with UTM codes are verified with blue badges, which Facebook says means the page is “the authentic Page or profile for this public figure, media company or brand.” All 13 verified pages used UTM parameters corresponding to the owner and/or name of the page (for example, Mike Huckabee’s pages included the parameter “mikehuckabee”). Using Crowdtangle data, Media Matters looked through all links posted by these blue-badge pages between January 1, 2018, and January 31, 2018, and counted the percentage of links posted that go to Liftable Media’s four main brands, Conservative Tribune, The Western Journal, Liftable.com, and The Wildcard. (We did not look at links from Facebook pages for Liftable Media’s brand sites -- The Western Journal, Conservative Tribune, and Liftable.com.) 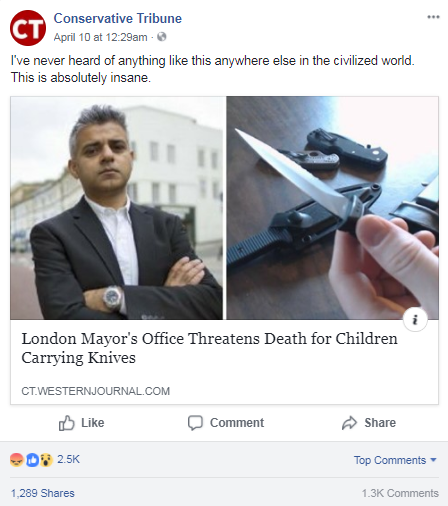 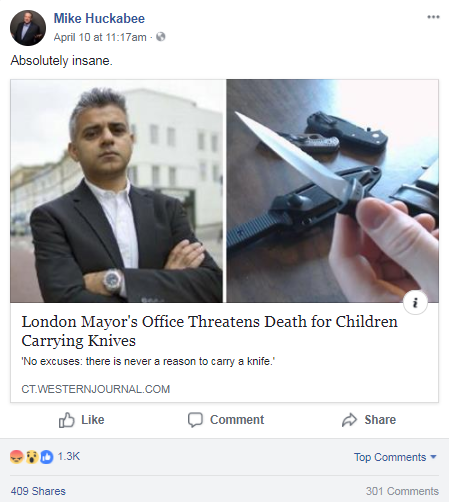 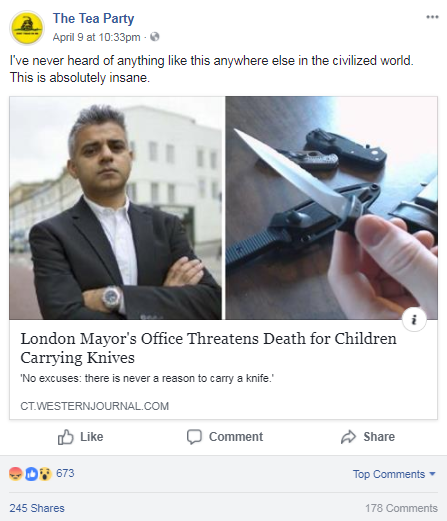 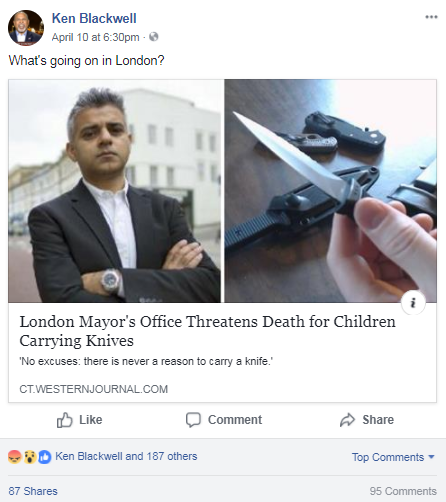 Some conservative organizations also appear to be part of Liftable Media’s promotional network. Family Research Council (FRC), which has been designated a hate group by the Southern Poverty Law Center, has previously, though infrequently, shared links to Conservative Tribune and The Western Journal with UTM codes specific to FRC. Ken Blackwell, a senior fellow at FRC, regularly shares Liftable Media links with UTM parameters specific to his name.

Another page, The Tea Party, seems to be run by Liftable Media and does not actually pertain to the tea party movement. This page, which links to westernjournal.com in its “About” section and to a liftablemedia.com email address, has over 3.2 million likes, significantly more than the actual “Tea Party” Facebook page. 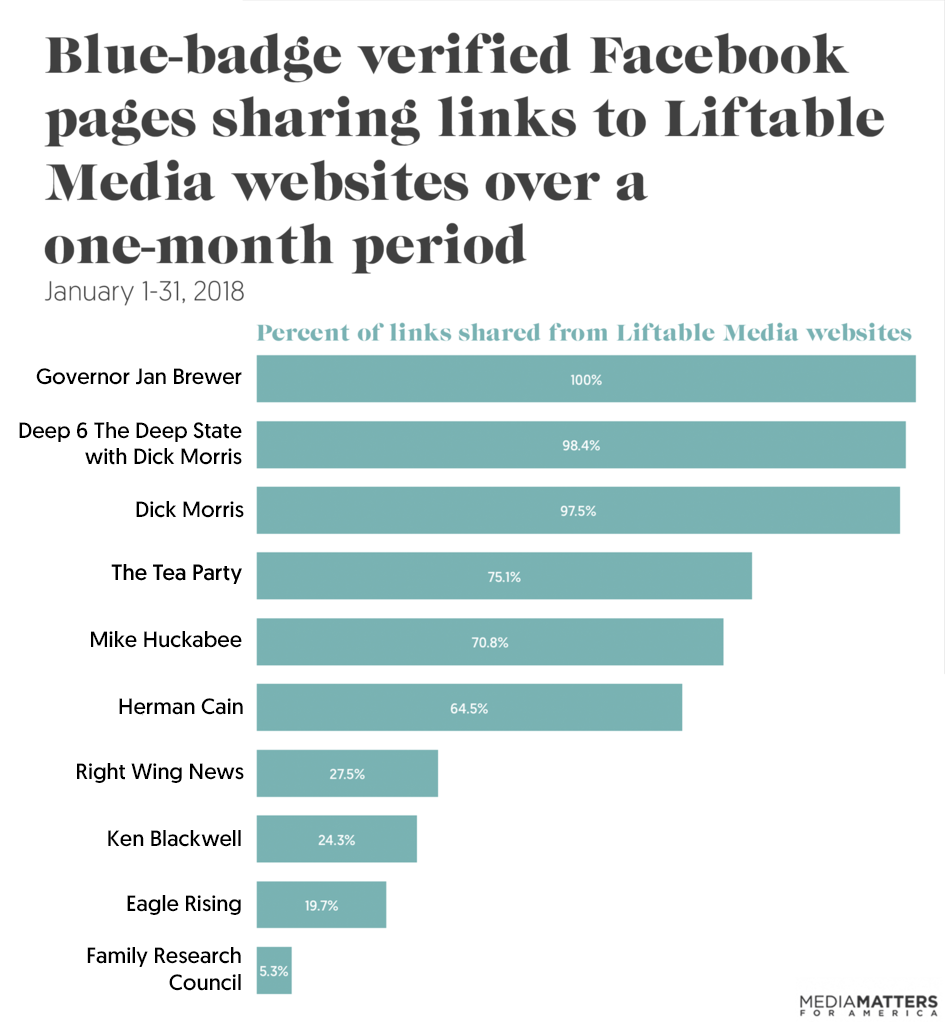 At least 41 other websites belong to the same promotional Facebook networks as Liftable Media.