Brian Kolfage, the man behind a campaign to crowdsource donations for a wall at the U.S. southern border, has been using a network of Facebook pages tied to fake news sites to boost his funding efforts.

On December 17, Kolfage launched a GoFundMe campaign seeking $5 billion to fund President Donald Trump’s proposed border wall between the U.S. and Mexico. The campaign has so far raised $7 million and has been promoted by right-wing media and figures. Before the campaign took off, Kolfage appears to have amplified it on Facebook using a network of pages connected to the fake news sites Conservative Post and, as of late, Right Wing News.

Kolfage has been involved in Facebook networks linking to fake news sites before. In October, the social media company banned a network of other Facebook pages connected to his fake news site Right Wing News for “coordinated inauthentic behavior.”

Since then, Kolfage appears to have coordinated with two blue badge-verified Facebook pages -- Conservative Post and American Joe -- and is using them in place of the removed pages to promote Right Wing News and now to promote his wall fundraising campaign.

Toward the end of November, Conservative Post and American Joe (which has over 916,000 page likes) began frequently linking to the domain rightwing.news, a website also titled Right Wing News, which shares a Google Analytics code with Kolfage’s website rwnofficial.com. (Website administrators use Google Analytics codes to track analyzable data and metrics for their sites; sites that share this code are associated with the same web administrator.)

Thus, even though Facebook removed his old pages, Kolfage has been able to re-create the amplification network with Conservative Post’s pages. On December 17 (the day Kolfage launched his campaign on GoFundMe) and December 18, Kolfage’s Facebook page and Twitter handle, Conservative Post, and American Joe all shared links to a petition that redirected users to Kolfage’s GoFundMe campaign. The petition used ClickFunnels, a marketing tool used to promote products, events, and build contact lists, and the link (under the url americanjoe.clickfunnels.com) earned over 63,000 interactions on Facebook. 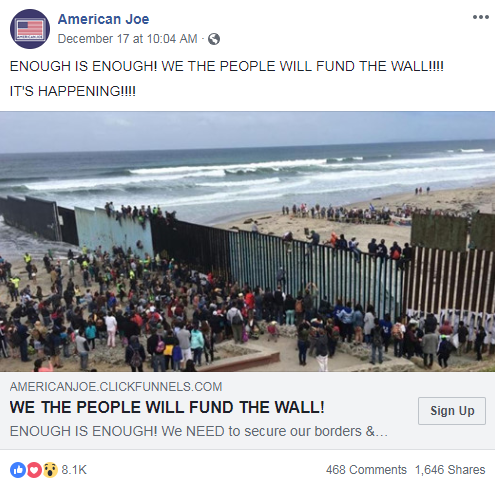 The following day, right-wing media figures and far-right trolls including Milo Yiannopoulos, Raheem Kassam, Jim Hoft and Ryan Fournier picked up Kolfage’s campaign and began promoting the GoFundMe link, which has thus far earned over 1.3 million interactions on Facebook. And right-wing news outlets Fox News and Daily Mail have earned tens to hundreds of thousands of Facebook interactions by posting content about the campaign -- as have far-right clickbait sites Chicks on the Right, Update America, and Kolfage’s Right Wing News. These statistics demonstrate that amplification networks of Facebook pages continue to be a staple in helping make right-wing content go viral.