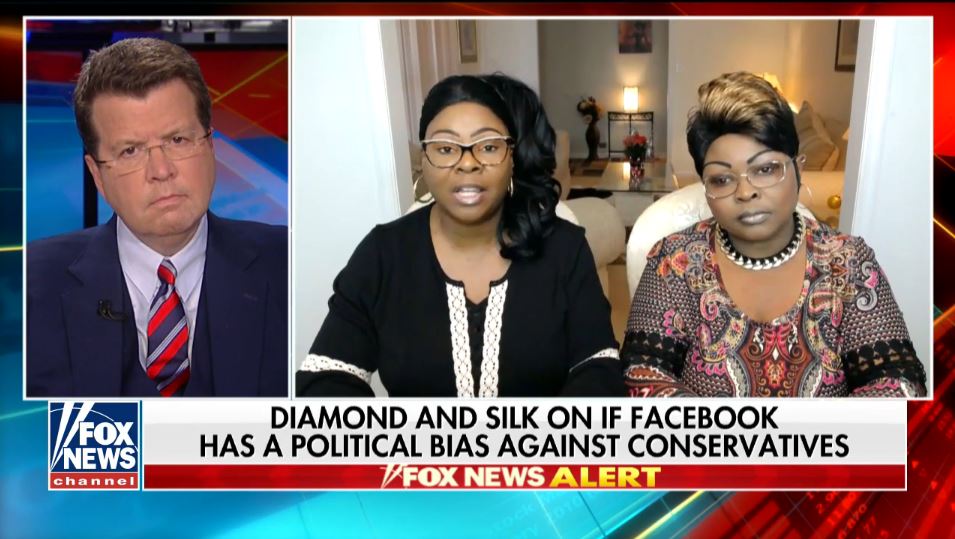 In a series of Fox News interviews this week, the pro-Trump YouTubers who go by the stage names “Diamond and Silk” declared themselves the victims of politically motivated censorship by Facebook.

The network’s hosts have all but applauded the pair’s repeated claims that the social media giant deliberately kept their content from reaching their audience because the company is biased against conservatives, and that the company had not reached out to them to fix the purported problem. Fox trumpeting the story encouraged press-hungry Republican lawmakers to grill Facebook CEO Mark Zuckerberg about the allegations when he testified on Capitol Hill, which in turn generated newsy clips for the network to highlight in its reports on the hearings.

There’s just one problem: Diamond and Silk’s allegations don’t appear to be true. But that hasn’t stopped Fox from continuing to host them to attack Facebook, even after their story was debunked.

The vloggers, sisters whose real names are Lynette Hardaway and Rochelle Richardson, developed a fervent following during the 2016 presidential campaign because of their unyielding devotion to Donald Trump and their willingness to barnstorm the country on his behalf. The duo rose with Trump, and they currently have an audience of more than 144,000 YouTube subscribers and roughly 1.5 million followers on Facebook.

But that rise, they claim, has been stymied by Facebook. Beginning with a Friday night post on their Facebook page and continuing in six subsequent Fox News interviews, Diamond and Silk have alleged that the company has been deliberately keeping those followers from seeing and interacting with their content since September 2017. After months of getting “the runaround,” they say, the company sent them an email stating that “they deemed our content and our brand unsafe to the community” (in a statement, Facebook said the message had been “inaccurate”). And that, in their telling, was their last communication with Facebook. They say that the company is biased against them because they are black women who support Trump.

Facebook’s opacity and power leaves the company unusually vulnerable to criticism that it is choking off public debate. A change in Facebook’s algorithm can make or break news outlets and content providers, causing drastic changes in web traffic and thus ad revenue. But its willingness to bend over backward in response to conservative pressure campaigns also leaves it vulnerable to liars and grifters. And that appears to be what happened here.

On Thursday, after Zuckerberg was battered by Republican legislators obsessed with the Diamond and Silk story and following several days of credulous Fox coverage, The Resurgent’s Erick Erickson and The Daily Beast’s Andrew Kirell reported that contrary to the pair’s claims on Wednesday that Facebook had not contacted them beyond the “unsafe” email, the company had reached out to them by email as early as Monday and by phone on Tuesday.

The root of Diamond and Silk’s issue, Erickson wrote, appeared to be new Facebook monetization guidelines the company had released in September 2017 that applied across Facebook, not a narrow effort to censor them. “I think Facebook made some mistakes, but that it was not intentional, not malicious, and not nearly as bad as it seemed,” he concluded.

The same afternoon, ThinkProgress’ Judd Legum reviewed Facebook data about Diamond and Silk’s page and concluded that their claim that the company is deliberately ensuring they reach fewer people due to political bias “is totally without merit.” He determined that their Facebook page interactions actually grew from March 2017 to 2018 -- as liberal-leaning pages similarly focused on posting videos saw sharp declines -- and that while the reach of their videos has declined, it was to a lesser extent than those of liberal pages.

“Any changes to their page performance over the last few months were not targeted at them, but the result of broader shifts across Facebook,” Legum concluded. “Indeed, many pages, including liberal pages, have suffered large declines because Facebook has reduced the distribution of videos and other content published by pages in favor of content from ‘friends and family.’”

So Fox was used as a pathway to promote Diamond and Silk’s lies. And the network doesn’t appear to care. On Thursday afternoon, after Erickson, Kirell, and Legum had demolished their story, the pair was back on Fox. The host who interviewed them, Neil Cavuto, was nonplussed by their statements that the network had tried to contact them only via Twitter, or their claim that they had been targeted because they support the president. “Do you think Mark Zuckerberg does have a bias against conservative sites -- conservative participants?” he asked at one point. “Yes, we do,” Diamond replied. Indeed, while Fox had championed their tale in numerous reports, the network has yet to report on the new information debunking it.

Why is Fox unwilling to set the record straight? Probably for the same reason the network first reported on Diamond and Skil’s claims: Their narrative fits cozily into Fox’s broad conceit that, in spite of controlling all three branches of government, conservatives in America are constantly being censored and stigmatized.

The network appears particularly enamored of Diamond and Silk’s claim that they have been “silenced” because of their race. Here’s how Laura Ingraham -- currently trying to escape an advertiser boycott apocalypse by rebranding herself as a First Amendment crusader -- discussed the story Monday night:

LAURA INGRAHAM: Silk, isn't it the case that the reason -- I mean, we all know the reason that Facebook didn't want your post to reach your followers is because you’re black, you’re conservative, you support Trump, and you tell it like it is and you call it as you see it. That's offensive to the left because they want to silence people like you, both you, Diamond and Silk -- doesn't matter if it was just Silk or Diamond or Diamond and Silk -- they do not want you to reach people. I'm sorry and I'm going to say it until I'm blue in the face.

INGRAHAM: They are afraid of both of you. They don't want your views out.

Perhaps the revelation that Fox was used to promote a lie will lead the network to be more reticent in giving Diamond and Silk airtime. But I rather doubt it -- I think it’s much more likely that the pair will end up on Fox’s payroll. They’re pro-Trump conservatives with a victim narrative, and at Fox, that’s probably enough.