Two Orange County Republican Party officials in Florida are administrators of the private conspiracy theory Facebook group Florida Republicans United. Lou Marin and Kathy Gibson are the vice chair and state committeewoman, respectively, for the Orange County Republican Executive Committee. Gibson recently came under fire for posting a racist meme targeting Florida Democratic gubernatorial candidate Andrew Gillum, which she claims was posted by someone who had hacked into her Facebook account.

Administrators, including Marin, have pushed far-right conspiracy theories like QAnon and others related to the Parkland shooting, the Unite the Right rally in Charlottesville, VA, and the murder of Democratic National Committee staffer Seth Rich. They have also posted anti-LGBTQ, anti-immigrant, and anti-Muslim content. The official Facebook page of the Orange County Republican Executive Committee often posts the same links to far-right conspiracy theories and fake news that Marin posts in the group.

Other administrators of the group include far-right conspiracy theorist Trevor Loudon of New Zealand (who is also an administrator of the racist, conspiracy theory-pushing Facebook group Tea Party) and Keith Flaugh, who founded the conservative anti-science group Florida Citizens’ Alliance.

The group has ties to Republican candidates and lawmakers

Marin created a private event in the Facebook group for a meet-and-greet with Republican candidates where Florida gubernatorial candidate Rep. Ron DeSantis (R-FL) is slated to speak. DeSantis is not currently listed as a member of Florida Republicans United (his personal Facebook account was deactivated after he was outed as an administrator for the group Tea Party). However, eight other Florida Republicans -- a mix of candidates for office and current lawmakers -- appear to be listed as members. They are:

Virginia Fuller is the only Republican candidate listed above who appears to have campaigned in the group. She shared posts from her campaign page and sought paid volunteers in the group multiple times.

Former Arizona Senate candidate Kelli Ward is also a member of this group.

Marin posted various conspiracy theories and fake news articles related to the shooting at Marjory Stoneman Douglas High School in Parkland, FL. One article Marin shared from a fake news website speculated that the Parkland shooting was “just another false flag designed to take your guns.” He shared articles from far-right conspiracy theory websites accusing Parkland shooting survivor David Hogg of being coached before televised interviews, of conspiring with CNN, and of changing his story in different interviews. Marin also shared various articles from fake news sites that smeared Hogg, including one which said Hogg “should not be taken seriously as a ‘mass shooting survivor.’” 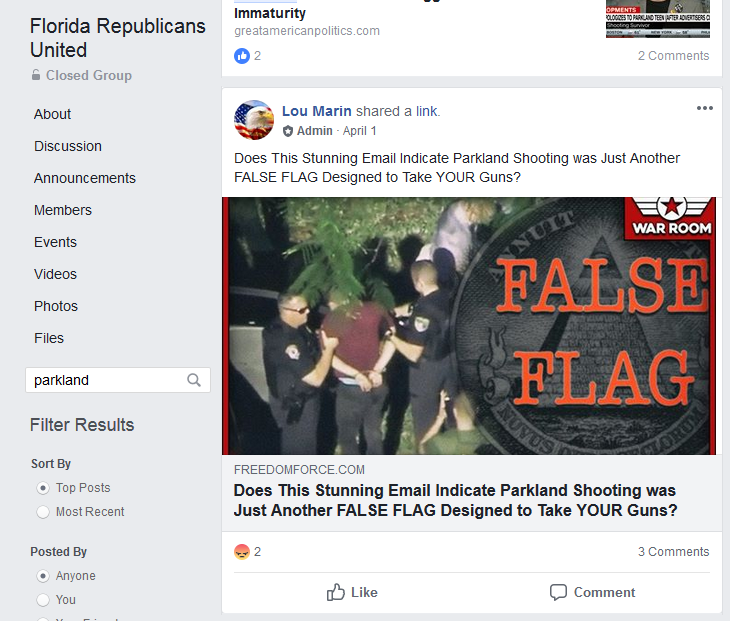 Marin and another administrator of the group, John Lofgren, spread conspiracy theories about the 2017 “Unite the Right” rally in Charlottesville. Lofgren called the rally a “false flag operation” and also encouraged group members to ask their representatives and senators to “support Trump’s ‘both sides are wrong’ statement” because “the agitators from the left were paid - and they probably paid those fake ‘right wing’ activists, too.”

Marin posted articles from fake news sites saying that CNN lied about Charlottesville; claiming that philanthropist George Soros and the CIA were connected to the Charlottesville rally; and defending James Alex Fields Jr., the neo-Nazi who killed counterprotester Heather Heyer by charging into a crowd with a car. Marin also shared a post questioning the legitimacy of reporting surrounding Charlottesville, which said that “the media and the political establishment [are] just capitalizing on a tragedy to sell tickets.” 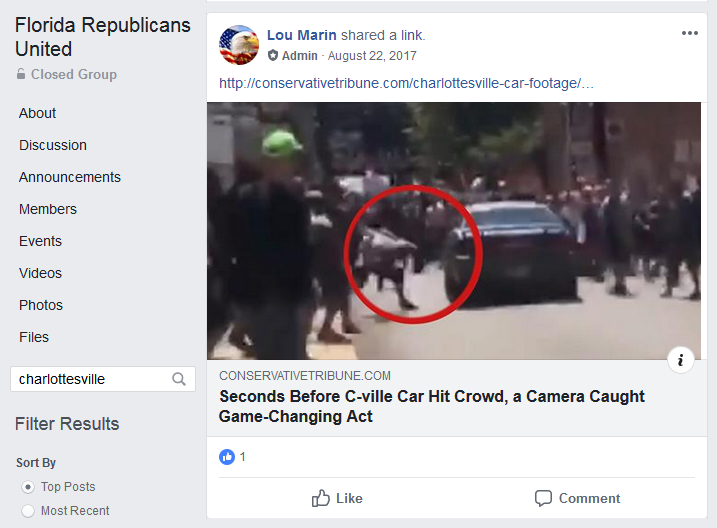 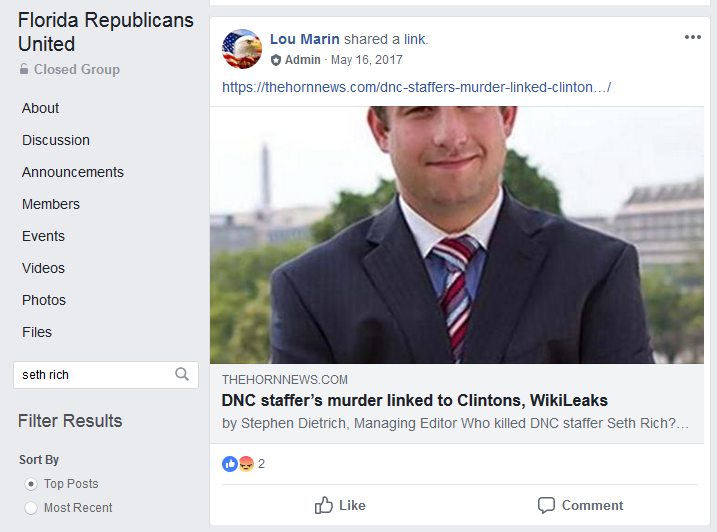 Lofgren made multiple anti-Muslim posts, including two that linked to the hate site The Religion of Peace, which claims that it “examines the ideological threat that Islam poses to human dignity and freedom.” Marin posted an article titled “Islam and the West are incompatible.” Marin also posted an article claiming that “new evidence” from the 2016 shooting at the gay nightclub Pulse in Orlando, FL, was “not LGBT motivated.” And GOP official Kathy Gibson made various bigoted remarks about immigrants in a post criticizing the Deferred Action for Childhood Arrivals (DACA) program. Gibson wrote that immigration has “everything to do with culture” and added that immigrants are part of “a third-world culture that does not value education that accepts children getting pregnant and dropping out of school by age 15, and that refuses to assimilate.”