Prominent fake news website YourNewsWire deleted a fabricated story headlined “Keanu Reeves: Hollywood Elites Use ‘Blood Of Babies’ To Get High” after the site was called out for its lie on Twitter -- but not before the post was widely circulated on verified Facebook pages, converted into a monetized YouTube video that became the top result when searching for the actor’s name on YouTube, and posted on other fake news sites that feature ads placed by Google. This is just the latest example of tech platforms aiding in the spread of misinformation from fake news websites.

On November 19, YourNewsWire published a post claiming Reeves said that “Hollywood elites use ‘the blood of babies to get high’” and that “‘these people believe the more innocent the child, and the more it suffered before it died, the better the high.’” The story was blatantly fake, but it quickly spread. It was posted on both of YourNewsWire’s associated Facebook pages, both of which are verified by Facebook. One of those pages is called The People’s Voice; the other, called YourNewsWire after the website, recently lost its verification under unexplained circumstances, but has since gotten it back. The false story about Reeves received more than 26,000 Facebook engagements, according to BuzzSumo. The Facebook posts have since been deleted.

The story was also posted on other fake news websites, some of which are funded by ads from Google AdSense, one of the most widely used advertising services by fake news websites. (YourNewsWire’s article displayed ads via Revcontent, another ad service used frequently by fake news sites.)

Additionally, a video pushing the fake story from the account Kinninigan for a time became the top result for a search of Reeves’ name on YouTube, which is owned by Google and which has struggled to not feature misinformation on its platform. It has been viewed over 114,000 times and is monetized with ads as well; Media Matters found on the video an ad for the movie Lady Bird. In effect, YouTube, Google, and Kinninigan are all potentially making money from this video claiming that Reeves said “Hollywood elites” get high from drinking baby blood. (Kinninigan’s account features a number of videos of YourNewsWire content, as well as conspiracy theory videos and videos about various celebrities such as Sofia Vergara, Angelina Jolie, and Hillary Clinton being reptilian shapeshifters.)

After some people on Twitter promised to flag the article as fake news on Facebook following a tweet from a Media Matters researcher who had called out the fake story, YourNewsWire's owner, Sean Adl-Tabatabai, lashed out. Adl-Tabatabai, who has openly stated that he believes facts are not sacred, tweeted: 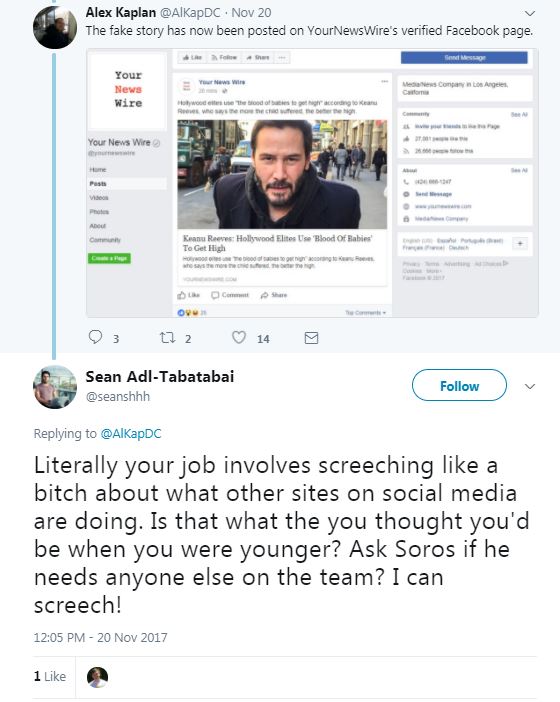 Although YourNewsWire took down the fake story after it was called out, the damage had already been done: other websites have now picked up the story and people are still sharing it on Facebook and elsewhere, as noted by Mashable.

The tech companies that contribute to the spread of fake news and profit from these stories are, at least in part, responsible for them. They have also, as noted by BuzzFeed's Charlie Warzel, repeatedly bungled handling the spread of misinformation. By verifying YourNewsWire’s pages, Facebook -- which claims to be committed to fighting fake news on its platform -- is implicitly indicating to its users that the website has some kind of legitimacy, which it clearly does not merit. And YourNewsWire is not alone; although Facebook appears to have removed at least one verified page for a fake news website and blocked its links, plenty of other fake news websites’ Facebook pages remain verified.

All of these companies should be aware that YourNewsWire is a bad actor. The site, which was founded in 2014, has come under fire for repeatedly publishing fake stories like a dying former MI5 agent confessing to killing Princess Diana, former Democratic presidential nominee Hillary Clinton helping run a pedophilia ring from the basement of a D.C. family pizzeria (which in fact led to a gunman to open fire in the restaurant), and actor Morgan Freeman wanting Clinton to be jailed. Some of YourNewsWire’s fake stories about Clinton and about former President Barack Obama have even been pushed by Fox News’ Sean Hannity. The website, which American and European experts have called a Russian proxy, has also published fake stories that seem to fit Russia’s anti-democratic, anti-European Union (EU), and anti-George Soros agenda. (The website has also been promoted by what appears to be a revived version of @TEN_GOP, a Russian account that was run by the Kremlin-linked Internet Research Agency.) And recently, the website published a fake story that the gunman involved in the massacre in Sutherland Springs, TX, was a member of antifa; the false story went viral and received more than a quarter million Facebook engagements, according to social media analytics website BuzzSumo.