As the vote count for the special election in Ohio 12th Congressional District still rolls in, fake news sites have taken to Facebook to spread conspiracy theories about Democrats rigging the election results. Some of these sites are using this fake narrative to advocate for voter ID laws, a voter suppression tactic that disproportionately affects minorities. This push comes as the Supreme Court recently upheld Ohio’s voter-purge law which Justice Sonia Sotomayor noted particularly impacts neighborhoods with low-income and minority populations.

These voter fraud conspiracy theories are largely based on two narratives. The first is a recent report that 588 votes in Franklin County were misplaced but later found. Fake news sites and social media accounts pushed baseless allegations that the recovered votes are part of an attempt by Democrats to rig the election. I Love My Freedom’s Facebook page posted an article on the discovery with the status: “The Democrats are trying to pull a fast one on us!!!” The Political Insider posted a video from its regular contributor and radio personality Wayne Dupree in which he speculated over the timing of the votes’ recovery, wondering, “Why didn’t they find the box of ballots the same night? Why is it now?” Dupree also said that the person who “found the ballots need (sic) to go to jail.” Conservative Tribune claimed that Democrats have a “history of fixing elections and opposing accountability for election integrity” in a Facebook post that linked to an article titled “Officials Magically Find Hundreds of New Votes That Boost Dem in Toss-up Ohio Election.” And an article from BizPac Review floated the idea that voter fraud was at play with the “newly-discovered votes that are favoring the Democratic candidate.” Young Conservatives, which is part of a Republican clickbait farm, posted an article about the recovered votes that c also specifically mentioned the voting rights of felons and made baseless accusations of illegal voting by undocumented immigrants. (These two groups are frequently featured in voter suppression narratives.) 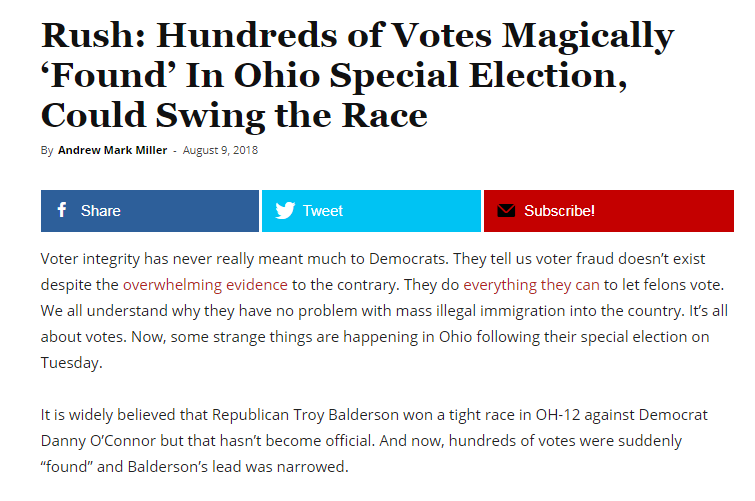 The second source for these voter fraud conspiracy theories came from an unverified claim, originating from the far-right Mercer-funded group the Government Accountability Institute, that 170 registered voters in Ohio’s 12th district are 116-years-old. When the fake news sites picked up the claim, they added allegations of voter fraud and election rigging by Democrats to the mix. Constitution.com wrote that Democrats “tend to benefit from voter fraud at a rate that far surpasses the assistance given to conservatives through the use of the same tactics.” Truthfeed claimed, “The Left hasn’t given up trying to create conditions favorable for voter fraud in Ohio.” And a Young Conservatives article which stated that “Democrats have been known to steal close elections” was shared by former Sarah Palin’s Facebook and Twitter accounts, and by conservative commentators CJ Pearson and Stacey Dash on Facebook.

The Western Journal and Conservative Tribune posted an article that claimed this news was part of an attempt from the Democratic Party to “get their ‘blue wave’ to happen.” The Western Journal and Conservative Tribune also advocated for voter ID laws, writing, “If voter ID laws are passed and implemented … those 170 impossibly old voters would no longer be able to cast ballots — and that is something the fraudulent Democrats of the state desperately want to avoid.” The article has earned over 81,000 interactions on Facebook, Reddit, and Twitter, and was shared by Fox News host Shannon Bream and frequent Fox News guest Larry Elder. Western Journal and Conservative Tribune’s Facebook network also pushed the claim with most of the pages posting the exact same status alleging that Democrats attempted to rig the election. 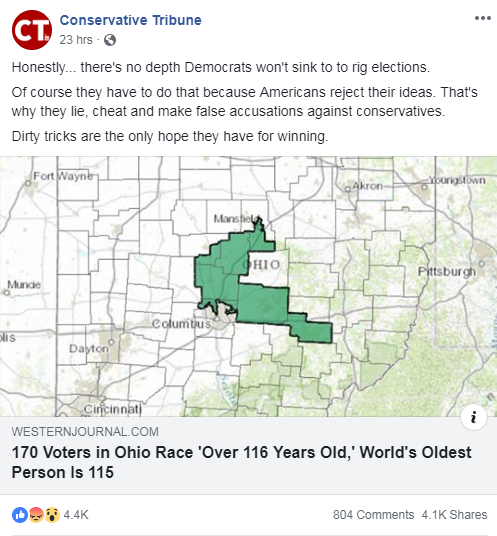