One of the biggest fake news sites in the United States is running with a conspiracy theory pushed by the followers of the QAnon conspiracy theory accusing actor Tom Hanks and director Steven Spielberg of pedophila, helping to get the claim onto Facebook.

In late July, followers of the QAnon conspiracy theory on Reddit and users on 4chan ran with and hyped a video in which an actor claimed that Hanks and Spielberg were pedophiles. QAnon followers also created videos pushing the claim on YouTube, helping to drive the accusations to the top of YouTube search for Hanks and Spielberg.

This is what happens when you search Tom Hanks on YouTube today.

Last week, Qanon folks decided he was a pedophile. If you were to search YouTube today, you'd believe it. pic.twitter.com/OQfL97YOWz

Three of the top five results are QAnon conspiracy theorists calling him a pedophile. Pandemic levels of bullshit unchecked on YouTube today. pic.twitter.com/KG8Vlo7z8T

Around the same time as NBC’s Ben Collins noted that the claim was spreading on YouTube, fake news site YourNewsWire published an article headlined “Tom Hanks & Steven Spielberg Accused Of Child Rape.” The article embedded one of the YouTube videos pushing the claim, which had “#PedoWood #pedogate #qanon” in its name. The site also posted the article to one of its Facebook pages, which has nearly 800,000 followers. As ad network Revcontent features ads on the site, clicks from that Facebook post to the article will let it monetize the claim. 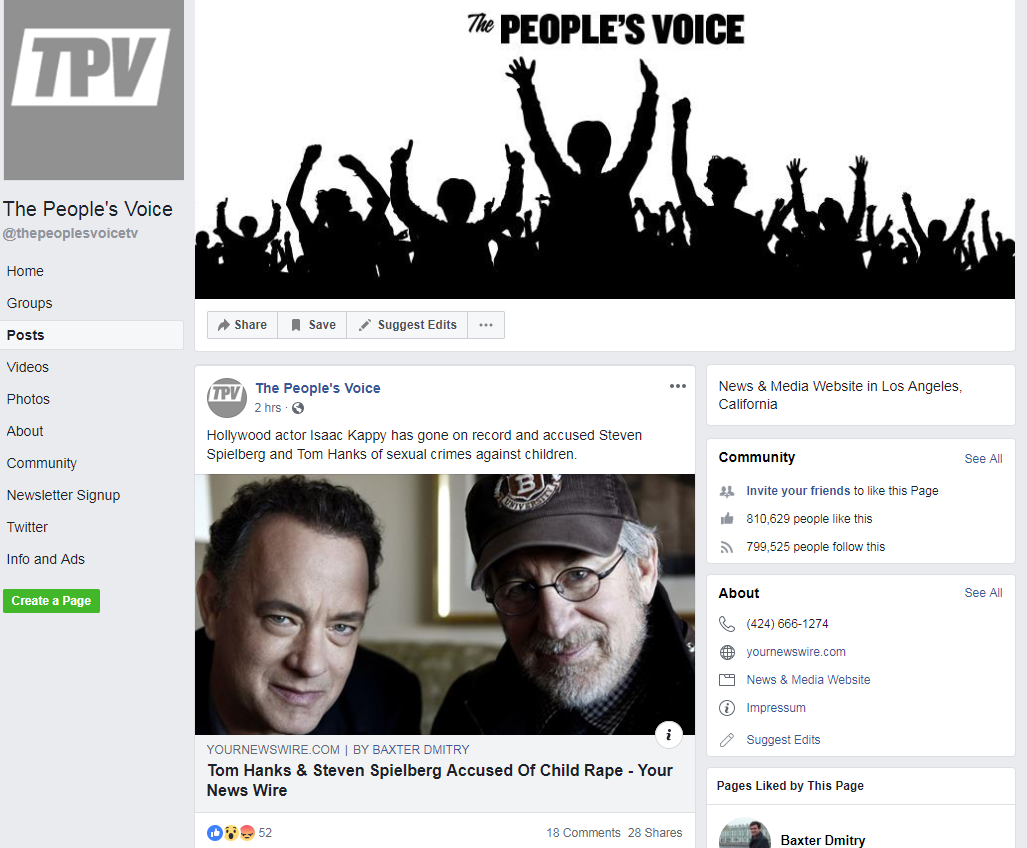 YourNewsWire is one one of the most heavily trafficked fake news sites, creating some of the most viral fake stories of the past few years, and its posts have been debunked by Facebook’s third-party fact-checkers more than 80 times. The site also gets higher Facebook engagement than conspiracy theory outlet Infowars, and its Facebook pages have nearly a million followers combined. The site has also been accused of acting as a proxy for Russia.

YourNewsWire also has close ties to the QAnon conspiracy theory, which holds that President Donald Trump has a master plan to defeat his perceived enemies and the “deep state.” The site has previously cited “QAnon” as a source for its fake stories (which it also put on Facebook). In February, the site pushed a false claim from QAnon followers that Hillary Clinton was connected to a Russian plane crash, and in April the site helped spread the false claim that originated in QAnon circles that there was a video of Hillary Clinton and Huma Abedin harming a child. And in June, the central figure in the QAnon conspiracy theory -- known as “Q” -- posted on 8chan a link to a fake YourNewsWire story. The next month, the site retweeted a user who wrote, “Q even posted an article from Yournewswire in one of its drops. :)”