UPDATE: Since the publication of this article, almost all of the Facebook pages Media Matters identified here have been taken down. Two groups -- Native Americans and Native Americans Group -- are still operational. Native Americans, however, has been renamed I Love USA, and most of the accounts connected to Eastern Europe that ran both groups are no longer listed as administrators or moderators. Additionally, the day before this article was published, Amir Asani, who had been co-running Native Americans, offered the Standing Rock Indian Resevation (sic) page for sale in an Albanian group and listed his location as Kumanovo, Macedonia. Asani has previously tried to auction that page and another page in the network in that group.

Facebook has verified multiple pages claiming to be related to the Standing Rock Indian Reservation that have posted fake stories. At least one of the pages is connected to Eastern Europe and earned itself and Facebook money through the platform’s Instant Articles feature.

In late 2016, protesters gathered at Standing Rock Indian Reservation to protest the Dakota Access Pipeline, which the Standing Rock Sioux tribe said would harm its drinking water. To exploit the protests, fake Native American Facebook pages run from Kosovo and Vietnam tricked people into clicking on clickbait and buying counterfeit pipeline protest clothing. Since then, this network of fake tribal pages has posted fake news to get engagement from Americans.

A Media Matters review has found at least two currently active pages that say they represent the Standing Rock reservation but have activity that indicates their authenticity is suspect. Each has a grey check mark, indicating that Facebook has deemed it to be an “authentic Page for this business or organization.”

One page, called Standing Rock Indian Resevation (sic), claims it is a “Religious center in Fort Yates, North Dakota” and has more than 83,000 followers. Although the page has published content related to Standing Rock, it has also posted numerous clickbait pieces and conspiracy theories that have nothing to do with Standing Rock. The page has also posted images and requests meant to boost its profile, such as a false claim about Facebook's CEO that said commenting “BFF” would reveal the user's security status. 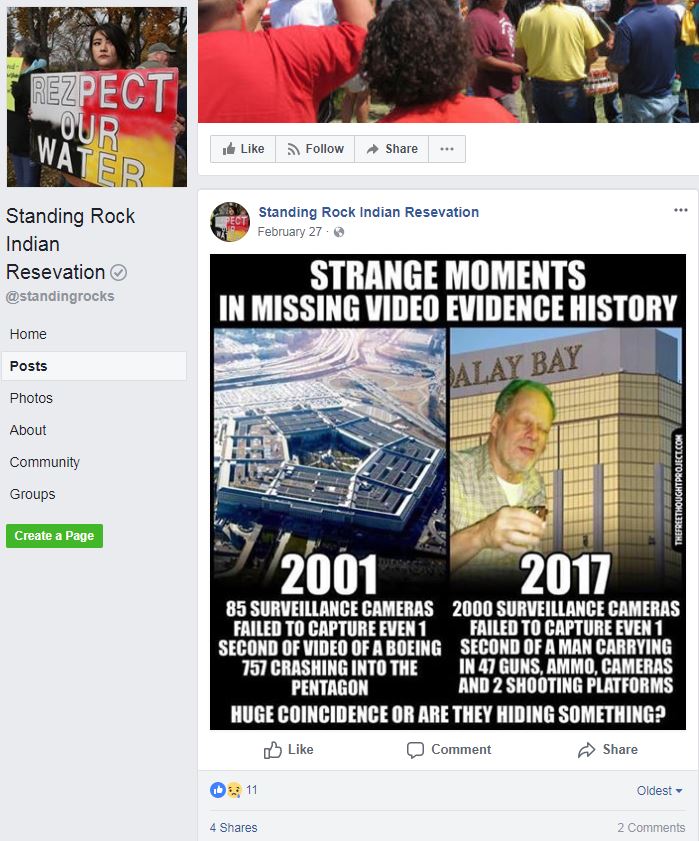 The other verified page, which has the same name but spells “reservation” correctly, claims to be a “Public & government service in Cannon Ball, North Dakota” and has more than 17,100 followers. Although the page has posted content relating to Standing Rock and Native Americans, in October the page also posted fake stories such as one claiming that Hollywood celebrities called for a strike until President Donald Trump resigns, another saying that actress Ashley Judd said women have more rights in the Middle East than in the U.S., and a third claiming that actor Robert Redford called Trump “the true leader of America.” The page has also posted clickbait, some of it conservative, that have nothing to do with Standing Rock. The page later claimed that it had been hacked, but since then it has posted the fake Hollywood strike story again and propaganda from a page run by Russia’s Internet Research Agency. 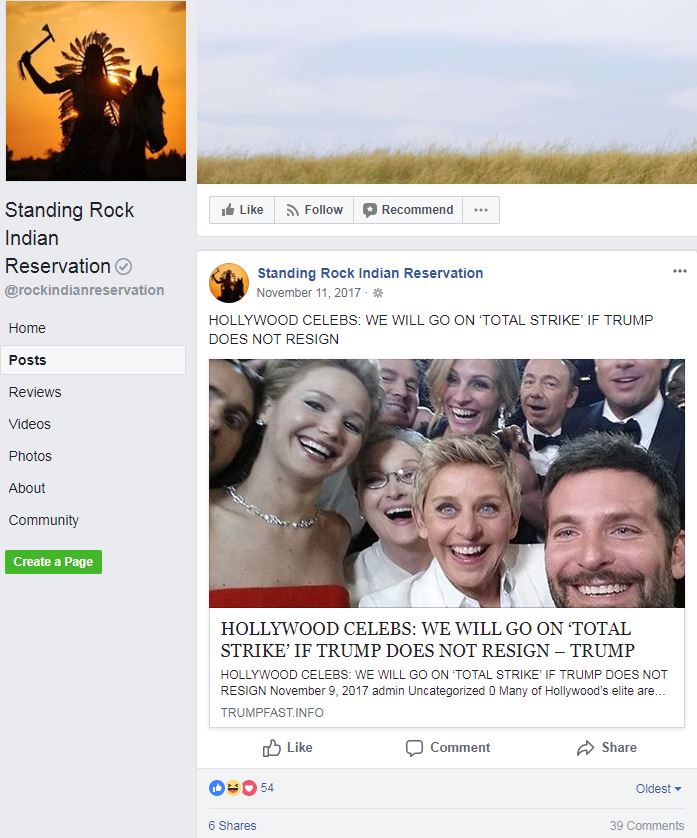 Facebook continues to struggle at monitoring pages that pretend to represent major organizations and movements, with bad actors using them for scams and to get clicks for money. That Facebook would verify some of these pages suggests the platform has more work to do in accurately authenticating its users.