Facebook featured a fake news website as a news source on a Trending topic page about a news story. The website has a history of pushing fake news, including the Pizzagate conspiracy theory.

On February 1, one of Facebook’s Trending topic pages was about the resignation of Brenda Fitzgerald, director of the Centers for Disease Control and Prevention, following revelations that she had made financial investments in the tobacco industry. One of the news sources listed under the “Also reported by” section was an article from the website Before It’s News. 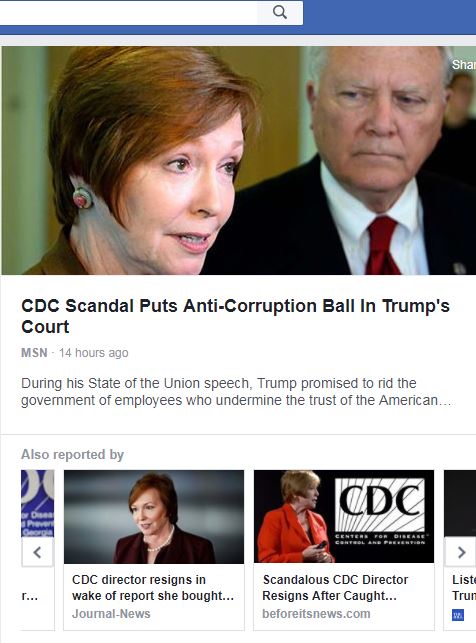 Before It’s News has a history of spreading fake news and misinformation. Its founder, Chris Kitze, told The Guardian in May 2017 that “he allows users to post any content” on the website “without fact-checking,” and said, regarding a false claim that photos had existed showing former President Barack Obama practicing Islam in the White House, “A lot of people think Obama is Muslim. That’s what it plays on. Is it real? I don’t know. The fact is a lot of people thought it was real or it reflects their sentiment.”

Displaying a story from Before It’s News is the most recent example of a number of recurring problems with Facebook’s Trending topics section. The section recently featured Infowars host Alex Jones pushing the far-right conspiracy theory “The Storm” as a featured post, and the section has repeatedly displayed conspiracy theory website Zero Hedge as a news source. A Trending topic page about the January 31 collision between a train carrying Republican members of Congress and a garbage truck in Virginia featured multiple conspiracy theories in its “people are saying” section, which Facebook said it would prevent going forward. It’s clear that Facebook is still struggling to control the spread of misinformation on its platform.