Update (10/2/20, 10:00 a.m. EDT): Additional review by Media Matters found that 17 of the 80 ads are now inactive after expiring on October 1. None of the inactive ads have a notice from Facebook about being removed for violating its advertising policy against voting misinformation, and the remaining 63 ads are still active on the platform.

As Facebook claims to be addressing voting misinformation, Media Matters identified at least 80 ads that are active on the platform as of 7p.m. EDT despite appearing to violate Facebook’s latest policy commitment.

On September 30, Facebook announced that it “won’t allow ads with content that seeks to delegitimize the outcome of an election.” The policy, which was supposedly “effective immediately” on Facebook and Instagram, also applies to ads describing legitimate voting methods as fraudulent or alleging widespread voter fraud, among other forms of election disinformation.

Despite these updated policies, Media Matters found at least 80 ads on Facebook and Instagram that violate the policy currently active on Facebook using the Dewey Square Adwatch tool set. The ads have earned over 2 million impressions and have the potential to reach millions of users on the social media platform.

Social media platforms including Facebook, Twitter, and YouTube are struggling to combat voting misinformation as President Donald Trump and his allies in right-wing media continue to promote debunked claims of widespread voter fraud and attempt to delegitimize the results of the upcoming presidential election. Media Matters previously reported on at least 529 ads from the Trump campaign and at least 263 ads from conservative legal organization Judicial Watch that pushed false claims of voter fraud.

Almost all of the ads that violate the latest policy against voting misinformation were run by right-wing figures, conservative organizations, Republican political action committees and candidates, or right-wing pages or outlets.

Some notable examples of Facebook ads pushing voting disinformation include:

At least two ads that earned over 1 million impressions 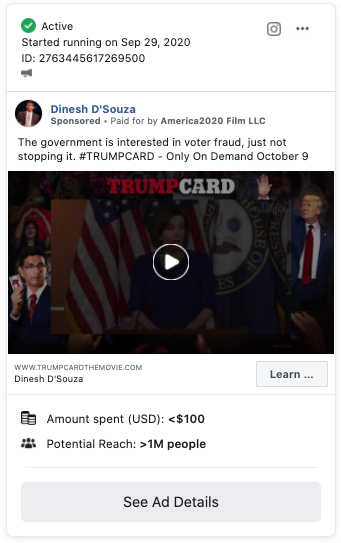 The Most Perfect Union 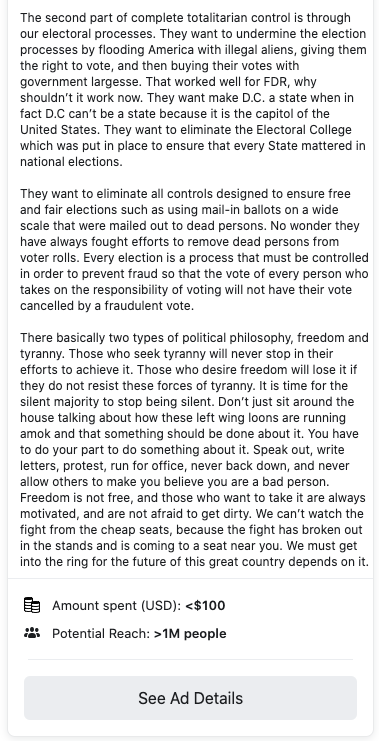 Alleging voting by mail is fraudulent 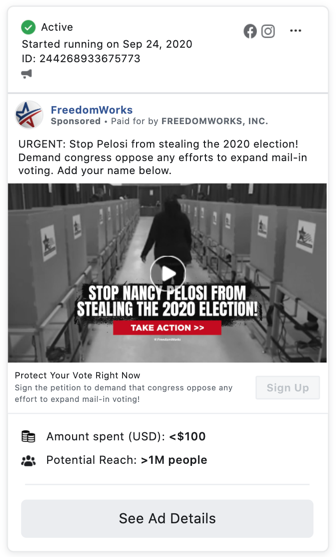 At least three ads are still active despite Facebook removing over 80 other ads from the super PAC. Those ads earned over 200,000 impressions before being taken down. 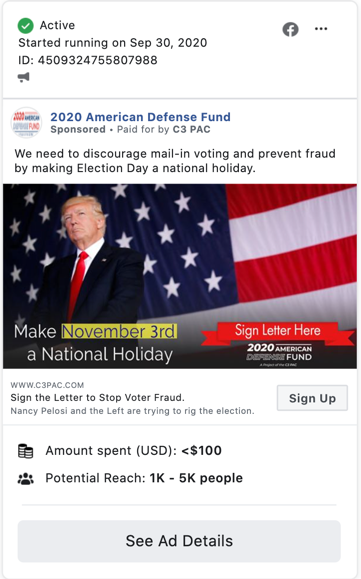 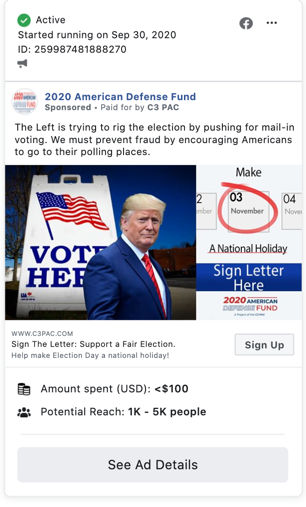 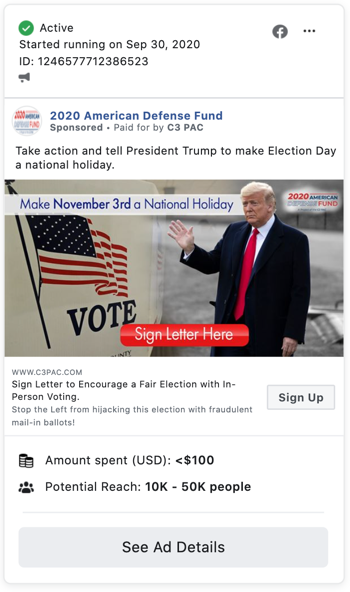 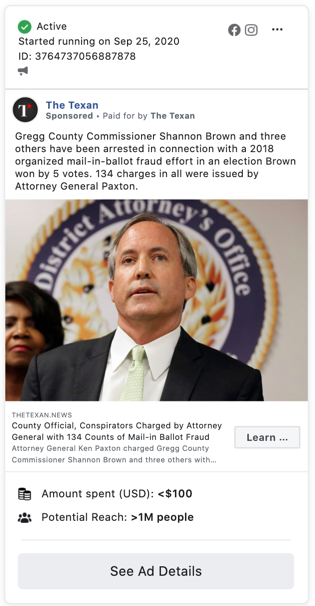 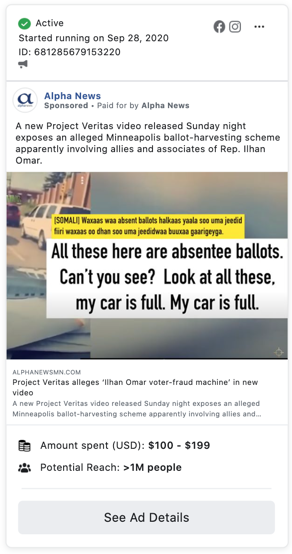 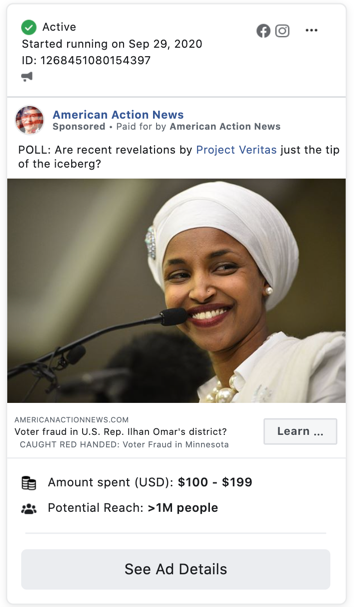 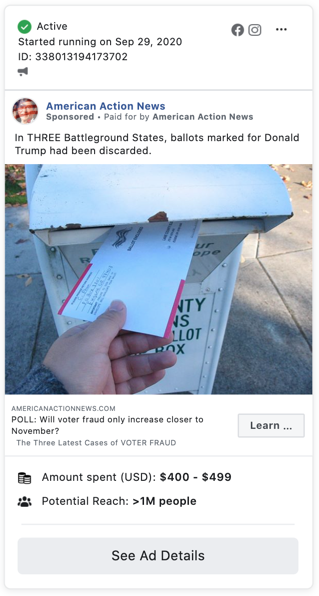 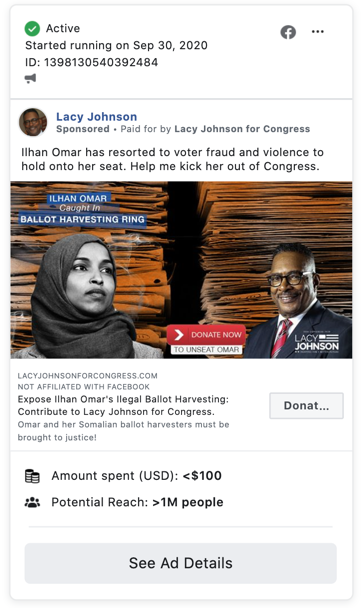 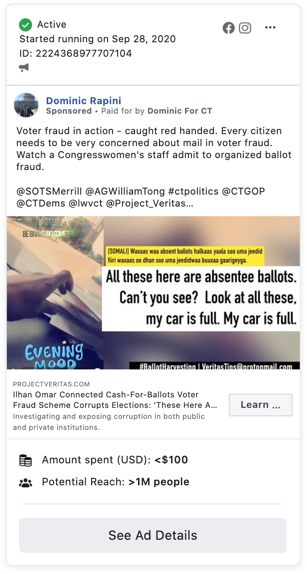 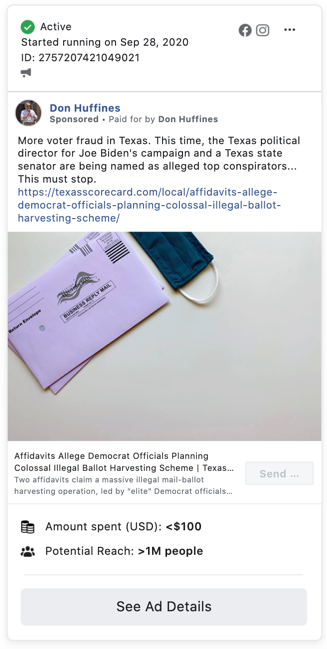