UPDATE: Since the publication of this article, all of the Facebook pages identified by Media Matters have been taken down.

Facebook has removed multiple pages that pretended to represent Native Americans but were actually pushing fake news stories linked to websites seemingly from Kosovo. However, a Media Matters review found that the network runs much deeper.

After Media Matters discovered eight purported “Native American” Facebook pages pushing fake news, Facebook removed them. But an additional review has found at least 18 more Facebook pages that appear to be part of the network. Not every page is branded as Native American, but the similarities between these pages and the fake news they share suggest they are interconnected. All together, the pages have an audience of more than 3.8 million followers.

The additional pages are:

There are an abundance of similarities between these Facebook pages. The pages in this network often share the same fake news stories, from the same sources, around the same time. Additionally, some of the pages have direct connections to Kosovo as well as similar cover photos.

One of The Native American Tribes pages, @Native.american.Trib, has repeatedly posted fake stories from the website Health Remedies, which features ads powered by Google AdSense and is registered to a person in Obiliq, Kosovo, the same town to which some of the pages Media Matters previously discovered were connected. These stories include one that falsely stated the police officer who arrested former first daughter Malia Obama was found dead under suspicious circumstances (she was also never arrested), that singer Miley Cyrus said she is leaving the U.S. and will never come back, and that actor Bruce Willis said President Donald Trump is the greatest president ever. Similarly, the Native American Beauties page is connected to and has posted fake stories from the website Gold Articles, which also has connections to Kosovo.

Other pages also have a pattern of posting the same fake stories at almost the same time. The page Native American Tribe (@nativeamericantribe2017) is connected to the website Help Animals, which is also registered in Obiliq. The page has posted fake stories (including the ones about Cyrus and Willis) from the website General News, sometimes at almost the exact same time they were posted on the pages Native - Everything Everywhere and Everything - Beautiful Photos. Two other pages, Native Americans - Photo - Music and Animals-Wild Passengers, have also posted the same fake stories from that website at almost the same time. One of the Native American Tribes pages, @Nativeamericantribes24h, also published the Malia Obama story and another one from the website Indigenous Network at the same time as the verified page Wolf Spirit when it was up. Indigenous Network has the same IP address as a website promoting cryptocurrency, according to analytic tool Trendolizer. 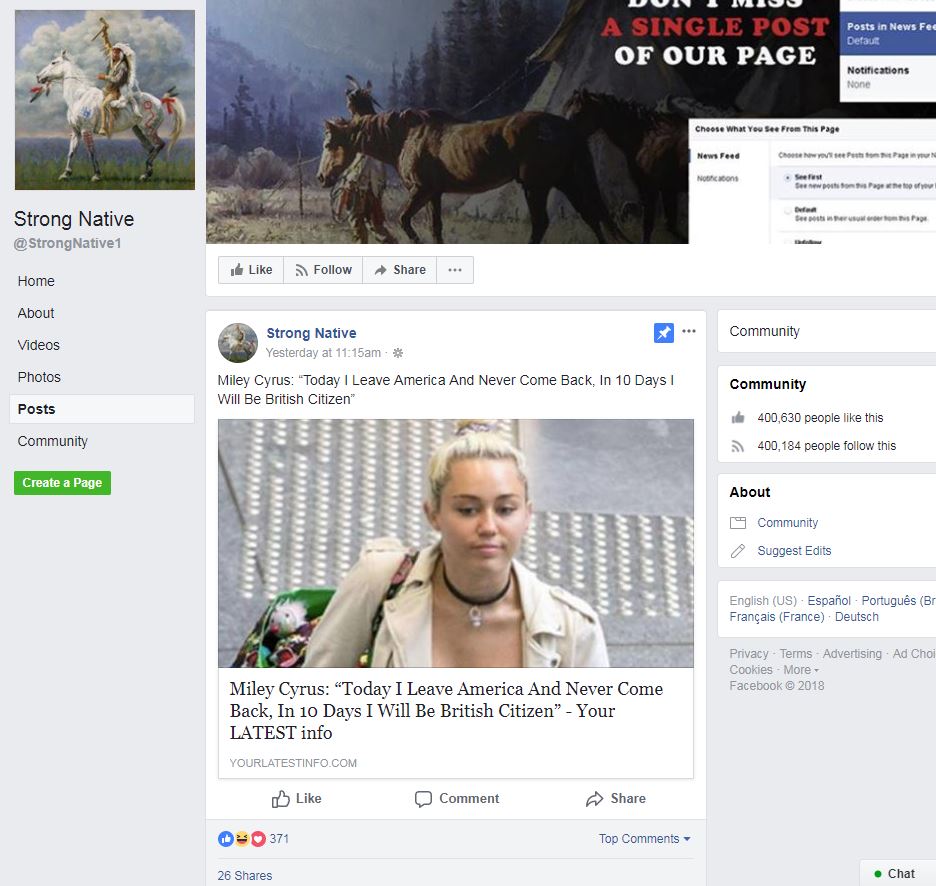 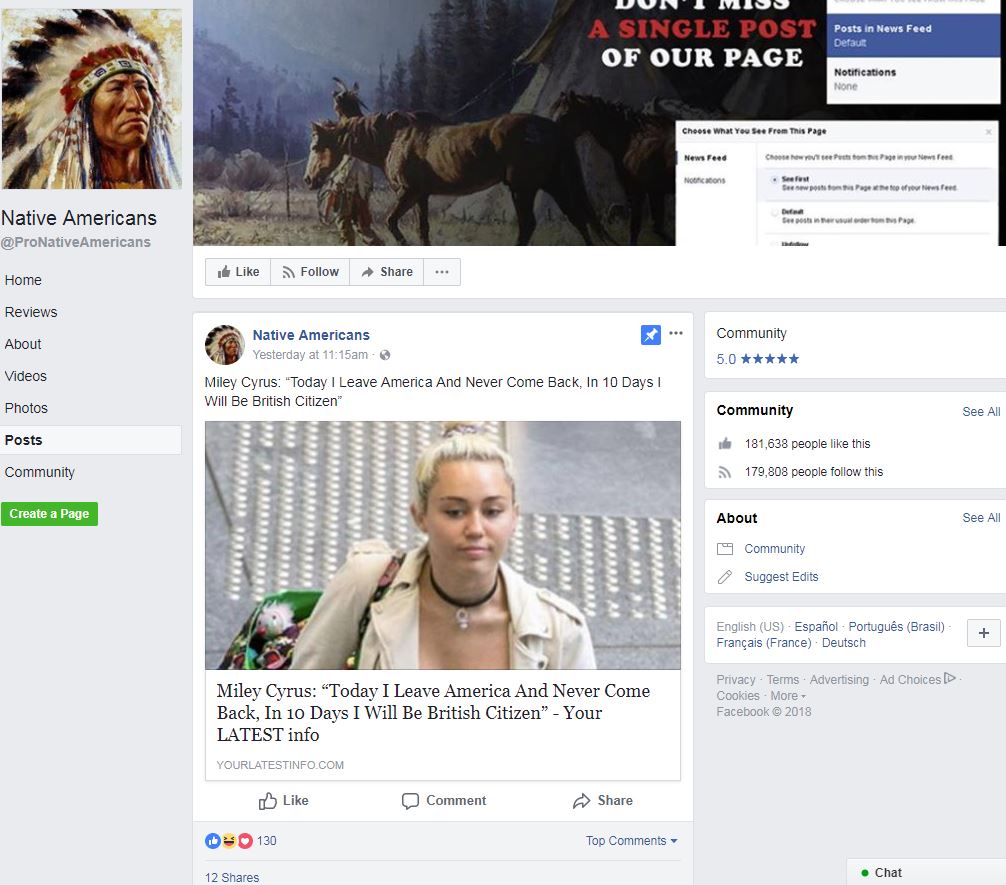 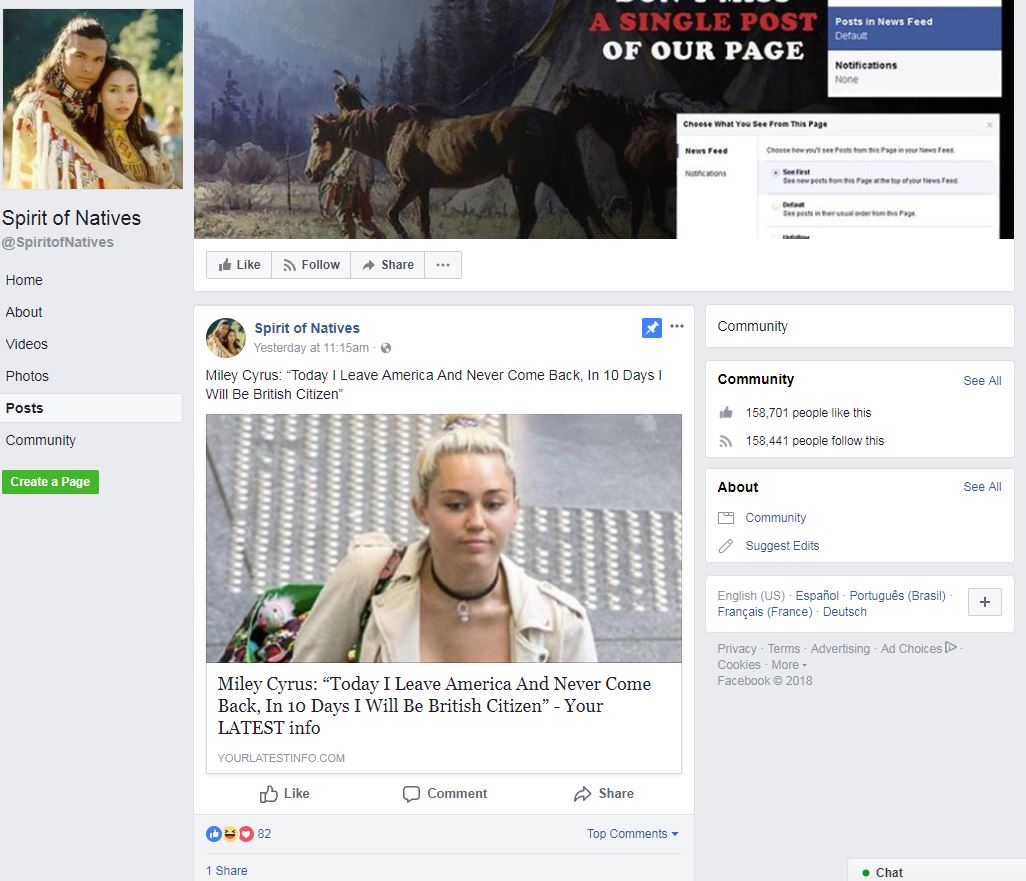 In total, Media Matters has identified more than 25 Facebook pages that, for the most part, use the pretense of being pages about Native American culture in order to push fake news. And it is quite possible that this network extends to other pages Media Matters has not yet found. This network of scammy pages spreading fake news for clicks is already clearly extensive, and is yet another example of the Facebook’s ongoing misinformation problem.

UPDATE #2: On February 7, BuzzFeed reported that multiple Facebook pages pushing fake news are using Facebook’s Instant Articles feature. The feature allows “publishers to have their articles load quickly and natively” and “insert their own ads or use Facebook’s ad network, Audience Network, to automatically place” ads in the articles. Facebook receives a portion of ad revenue if the pages use Audience Network. One of the pages BuzzFeed noted was using this feature was called Native American News, which has the same name and shared the same fake Malia Obama story as one of the pages that was in the fake news network mentioned in this piece. If this is the same page, and if Native American News employed Audience Network while using the Instant Articles feature (which, as BuzzFeed noted, almost every Instant Article it found employed), it would mean that Facebook earned revenue from at least part of this fake news network.