Florida Strong, a recently created Facebook page for a PAC that has paid for racist and anti-Semitic advertisements attacking Florida Democratic gubernatorial candidate Andrew Gillum, is using the same name as a pro-Democrat Florida PAC, seemingly in an effort to confuse audiences. The page is connected to Harris Media, a Republican ad firm that has worked with multiple far-right European political parties and was accused of creating attack sites on behalf of Kenya’s incumbent president last year.

The page has repeatedly linked to a site called learnaboutgillum.com, which was registered only two days before the Facebook page was launched. The site attacks the candidate on multiple issues, calling him a socialist who “is currently under a cloud of FBI investigation.”​ According to the analytic tool Trendolizer, the site shares an IP address with Harris Media, a Republican ad agency based in Texas. As reported by BuzzFeed, Harris was instrumental in developing digital strategies for several high-profile Republican campaigns, including Ted Cruz’s 2012 Senate campaign and Mitch McConnell’s 2014 Senate campaign, before moving on to promote far-right extremism in Europe.

In 2017, Harris worked for the far-right Alternative for Germany party, helping create anti-Muslim refugee ads for the party. 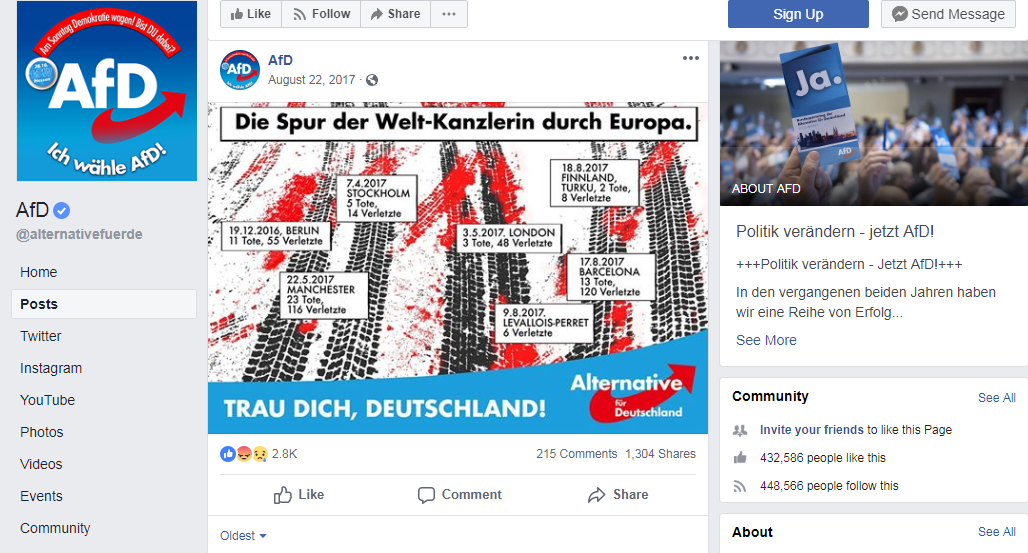 Harris was also behind Islamophobic ads for far-right former French presidential candidate Marine Le Pen the same year. A former Harris employee criticized the firm for those projects, telling BuzzFeed: “I doubt … many people started working there to work for neo-Nazis.” The firm worked with the far-right United Kingdom Independence Party in 2014, and was accused of creating sites smearing Kenyan President Uhuru Kenyatta’s opponent in 2017 during that presidential election campaign. In 2016, the firm was briefly hired by then-Republican presidential candidate Donald Trump, and it helped an advocacy group create online ads in swing states warning about “Sharia law.”

The Florida Strong page was created on October 10. Since then, several pages representing the Republican Party in different Florida counties have shared content from Florida Strong and sites connected to it, with Florida Strong also running multiple attack ads against Gillum. Those ads include the misleading claim that the murder rate increased 52 percent while Andrew Gillum has been mayor of Tallahassee. Another attack ad featured a racist cartoon of Gillum as a puppet being controlled by Democratic donors George Soros and Tom Steyer, playing on anti-Semitic tropes.

The Florida Strong page shares a name with another Florida PAC supporting Democrats. That group’s leader told the Miami New Times that the right-wing page was trying to confuse voters by using the same name as the pro-Democrat PAC. The original organization reported the new group to Facebook, but was told that the page did not violate any policy. The page is listed on Facebook as a political organization that works to provide “paid electioneering communication paid for by Florida Strong, 115 East Park Avenue Unit 1 Tallahassee FL 32301” -- an address that has been previously used by Florida PACs registered by former Alachua County Republican Party Chairman Stafford Jones. The right-wing Florida Strong group has received donations from multiple Florida donors and groups, including a major real-estate developer and one of the state’s regulated electricity monopolies.

The absence of detailed information about groups like Florida Strong highlights the continued lack of transparency in Facebook’s policies for political ads across the country. For instance, in Virginia, Democratic congressional candidate Jennifer Wexton has been targeted by anonymous Facebook ads, with the funding disclaimer saying only that the ads were “paid for by a freedom loving American Citizen exercising my natural law right, protected by the 1st Amendment and protected by the 2nd Amendment.”

DeSantis, who Florida Strong is supporting through ads, also has ties to the far-right. DeSantis used to be an administrator for a Facebook group pushing racist conspiracy theories. And a former employee of the anti-Muslim group ACT for America has campaigned for DeSantis in the group. DeSantis himself has also spoken at conferences organized and attended by far-right anti-Muslim media figures such as David Horowitz and white nationalist-sympathizer Milo Yiannopoulos.