Last year, in response to scrutiny over fake news spreading on the platform during the 2016 campaign, Facebook announced that it would crack down on “instances of Pages using Facebook ads to build their audiences in order to distribute false news more broadly” but may allow pages to run ads again if they stop promoting false news. (Some have called for the ban to be permanent.) That action has become a talking point for Facebook. During his testimony before Congress, CEO Mark Zuckerberg said that “the way to fight” people who are “trying to write the most sensational thing they can, in order to get people to click on it so they can make money on ads” is that “we make it so they can't run our ads, they can't make money.”

Yet a page called Proud to Be Deplorable that has promoted several false stories and an overwhelming amount of plagiarized, hyperpartisan content has run an ad multiple times since at least March. The page has more than 350,000 followers, and the ad has garnered between 20,000 and 100,000 impressions (or the number of times an ad was on screen) in total, according to Facebook’s ads archive. While the page pushed many of the false stories before it started running ads in March, it has posted some after and has continued to post plagiarized content throughout.

Some of the false and misleading stories the page has pushed are: 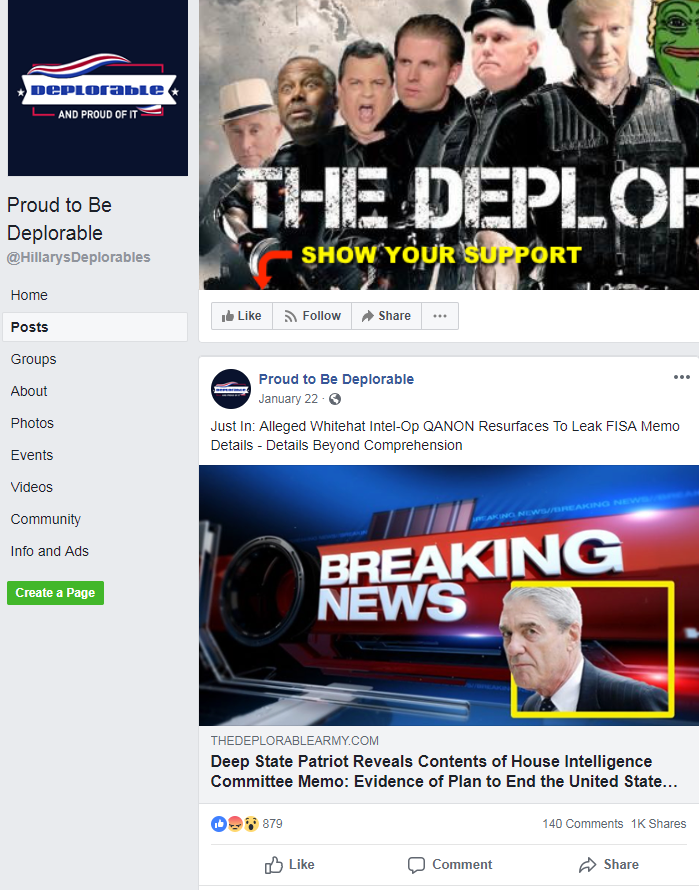 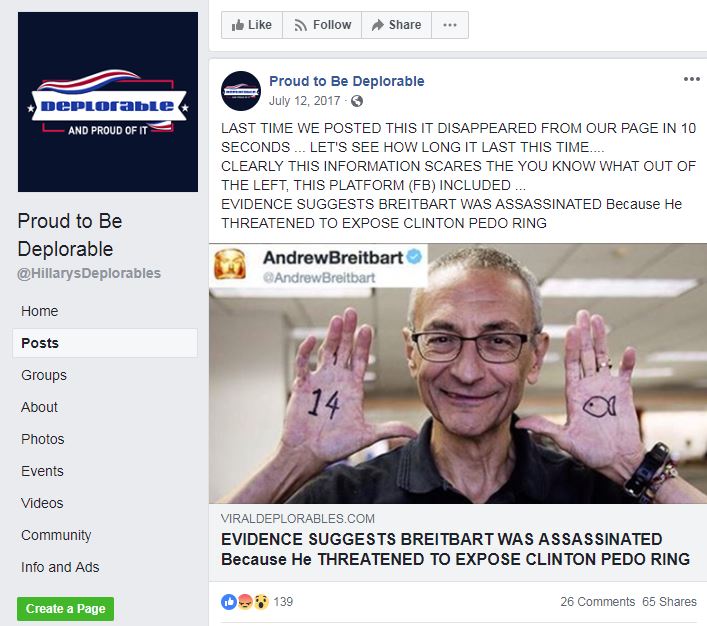 Additionally, the page has posted articles while calling for the “arrest” of Parkland, FL mass shooting survivor David Hogg and claiming a federal judge “mandate[d] American submission to [an] Islamic takeover.”

Besides featuring false stories, most of thedeplorablearmy’s content is plagiarized, often copied from The Gateway Pundit, a far-right blog that regularly posts wildly inaccurate pieces. The site also uses the ad networks Revcontent and Google AdSense (whose ads include the tag “AdChoices” at the top right). AdSense policies prohibit its ads from being placed on pages that feature copyright infringement and/or “entic[e] users to engage with content under false or unclear pretenses.” Revcontent also has policies prohibiting “fake news” and copyright infringement. These articles are then posted to the Deplorable Facebook page, which means Facebook is giving advertising space to a page that mainly monetizes off of plagiarized content.

Additionally, Facebook has allowed the page to use Instant Articles, a mobile web format that enables articles (identifiable via a lightning bolt icon) to load more quickly on the Facebook app. That means both Facebook and the page are making money via ads on false articles and smear pieces that also violate Facebook’s Instant Article policy on intellectual property. Though Facebook pledged to stop the misuse of its Instant Articles feature earlier this year, it is clear that the platform is still struggling to fix the problem.