The right-wing network CRTV posted on Facebook a fake interview with New York Democratic congressional candidate Alexandria Ocasio-Cortez by deceptively editing footage of her talking to PBS. The footage, which wasn’t labeled as satire until hours after it was originally posted, has been shared as real by multiple Facebook pages and groups and has more than 1.3 million views so far.

On July 23, the Facebook page for Allie Beth Stuckey’s CRTV show posted a video with the text “Allie *grills* congressional hopeful and progressive it girl ‘Alexandria Ocasio-Cortez’ on her socialist agenda and knowledge of government... or lack thereof. 😉” The footage seems to depict Stuckey asking Ocasio-Cortez about her qualifications to run for office, to which Ocasio-Cortez says she grew up in the Bill Clinton era and was in middle school when the 9/11 attacks happened. It also shows Ocasio-Cortez staying quiet when Stuckey asks her if she has any knowledge about how the American political system works. CRTV is part of the Facebook Watch program through which Facebook hosts original video shows.

More than 15 hours after the fake interview was posted on social media, The New York Times’ Shane Goldmacher noted that no such interview took place, and that instead CRTV combined footage from PBS host Margaret Hoover’s interview with Ocasio-Cortez and Stuckey’s questions. He wrote that it was “not labeled satire (other than a 😉 emoji).” The Facebook post has since added the language “Update: Yes, this is satire created from excerpts of the viral Firing Line interview with Ocasio-Cortez.” Stuckey has also defended the video from Cortez’ criticism, tweeting, “it was a clear joke, not a ‘fake’ video.”

Before the satire language was added, the video spread throughout Facebook. Presidential candidate Lee Newton Rhodes shared the post, writing, “This is what the liberals democrats would rather offer the voters than me.” It was also shared -- seemingly as if it were real -- in numerous conservative and pro-Trump Facebook pages and groups, with some describing Cortez as “the new face of the Democrats” and saying the footage shows Democrats “are even stupider than I thought.” Commenters on the posts wrote that Ocasio-Cortez is a “stupid bitch,” “Dumbo the clown,” a “complete idiot”, a “dumbazz” and “dumber then (sic) dog poop,” and said she has “been lickin to (sic) many toilet seats”and that her “house plants probably help her complete crossword puzzles.” 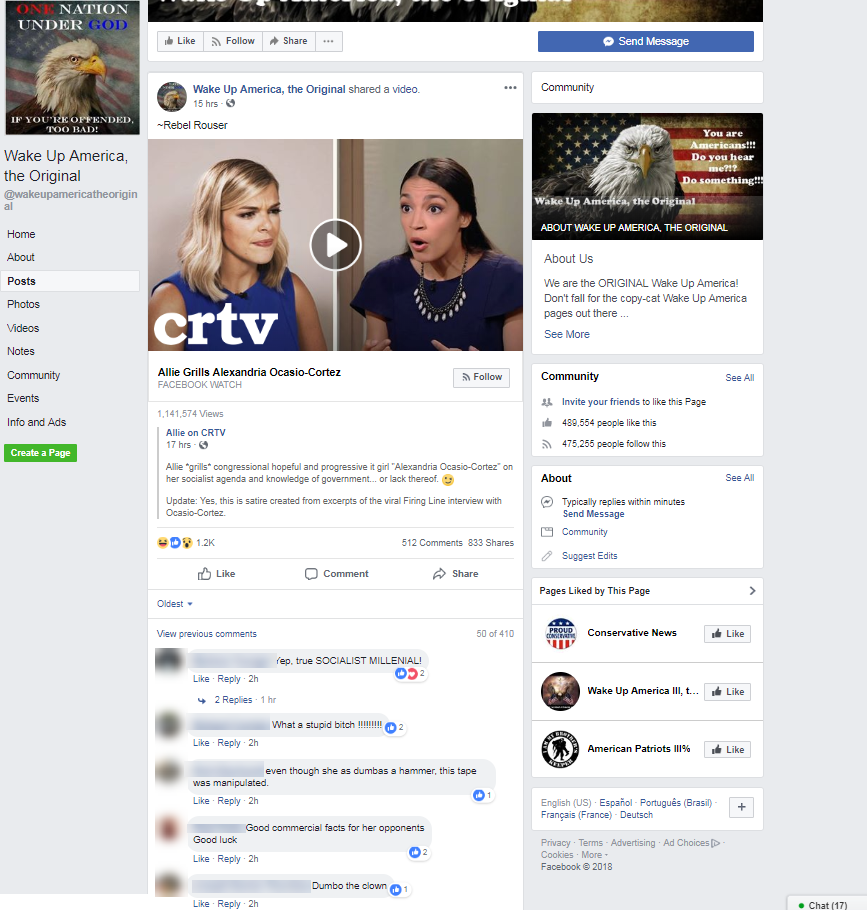 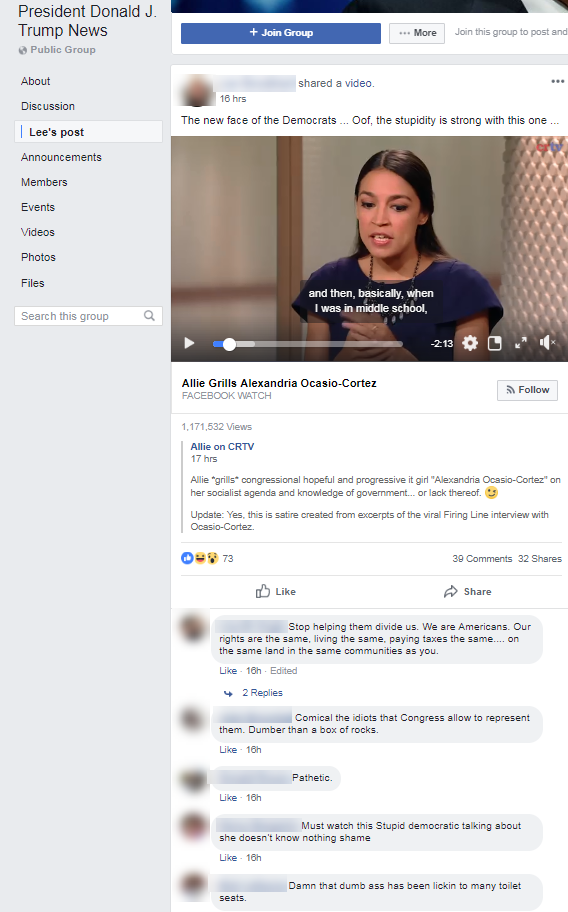