Republican Arizona Senate candidate Kelli Ward and her husband Michael Ward have been campaigning on a racist Facebook group with over 94,000 members called Tea Party that pushes conspiracy theories. The Wards are among the group’s administrators and moderators, along with some other Republican congressional candidates and extremist media figures. Some of the administrators and moderators have shared far-right conspiracy theories, fake news, and anti-Muslim, racist propaganda in the group.

However, since Kelli Ward’s previous Senate bid against John McCain in 2016, she and her husband have been promoting her posts in a Facebook group, Tea Party, that features conspiracy and racist content posted by other administrators and moderators.

Michael Ward regularly shares posts from his wife’s verified Facebook page to the Tea Party group. He has also previously requested donations from group members. Although most posts directly quote Kelli Ward’s social media and campaign positions, in a 2016 post, Michael Ward claimed that McCain is a supporter of the Muslim Brotherhood. 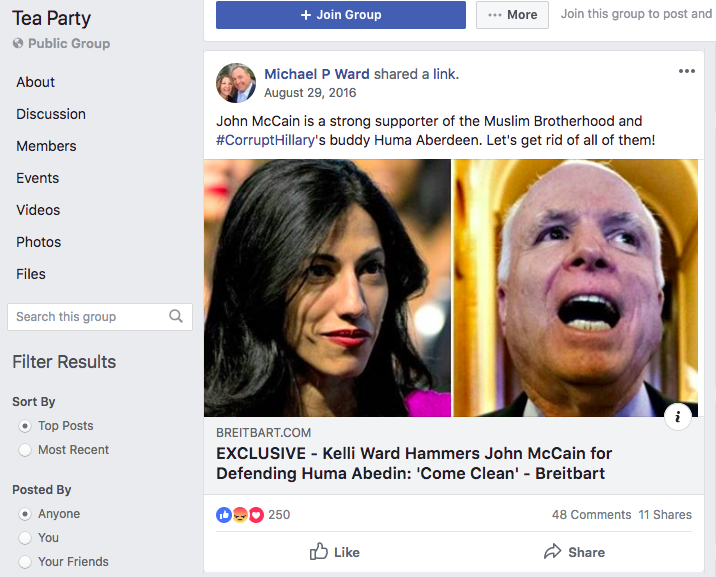 Some of Ward’s co-administrators and moderators have both promoted her campaign in the group and spread conspiracy theories and racist propaganda to the group’s members. Tea Party administrator Mike Michaels, who is also a co-administrator for the Facebook page Citizens For Trump along with Fox News analyst Jan Morgan, has also promoted Kelli Ward’s campaign events in the Tea Party group. Mike Michaels has posted multiple anti-Muslim messages in the group, referring to Islam as a “cancer” multiple times and saying that American women would “not be safe if Muslim immigrants come here from Syria.” Michaels has pushed the conspiracy theory that former President Barack Obama is Muslim multiple times. He also implied that Black Lives Matters is worse than the KKK.

Group moderator Lori Saxton has pushed conspiracy theories about the DNC’s involvement with Seth Rich’s murder, the Clintons allegedly murdering their political rivals, and Pizzagate. Another administrator, DeeAnn LaRue, claimed that the “Unite the Right” white supremacist rally in Charlottesville, VA, was “orchestrated by the left” in a post that got over 2,000 interactions. 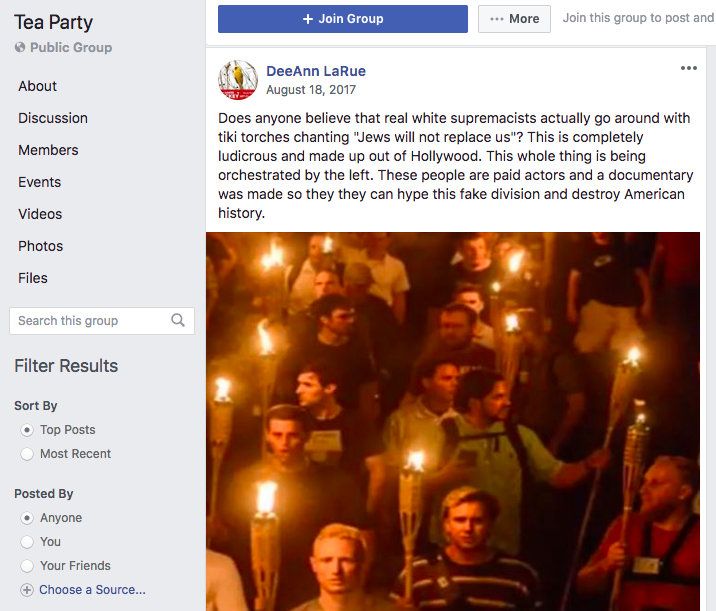