Ezra Klein's much-hyped news and policy site, Vox.com, has hired Brandon Ambrosino - a gay man who has made a name for himself by suggesting that being gay is a choice and whitewashing anti-gay bigotry and discrimination.

Vox, the news and policy site headed by Ezra Klein, announced on March 12 that Ambrosino had been hired as a writing fellow: 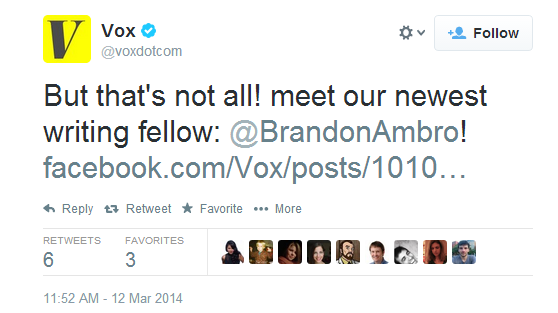 Klein's new venture - announced to considerable fanfare in January - will provide Ambrosino a formidable platform as the go-to gay writer for anti-gay conservatives seeking to legitimize their homophobia.

Ambrosino - whose professional background is as a jazz and tap dancer - first garnered considerable attention with an April 2013 essay for The Atlantic. Titled  “Being Gay at Jerry Falwell's University,”  Ambrosino's piece recounted his experience as a student at Liberty University, founded by the inflammatory fundamentalist preacher in 1971. Describing himself as “the world's most hypersexual fag,” Ambrosino admitted he was an unlikely candidate to attend Liberty, but in his experience, it was “very different from what you might think of it.” He lamented that the school “gets a bad rap because of a few of Falwell's soundbytes.”

Those sound bites included Falwell's notorious reaction to the terrorist attacks of September 11, 2001, for which he pinned some of the blame on gays and lesbians. Speaking with Pat Robertson on The 700 Club, Falwell said:

[T]he pagans and the abortionists and the feminists and the gays and the lesbians who are actively trying to make that an alternative lifestyle, the ACLU, People for the American Way - all of them who have tried to secularize America - I point the finger in their face and say “you helped this happen.”

Ambrosino's take on Falwell? He argues that the guy with the “big fat smile” has been unfairly maligned by progressives like Bill Maher. While Ambrosino never got the chance to tell Falwell that he's gay, he “wouldn't have been afraid of his response.” After all, Ambrosino wrote, he's confident that Falwell wouldn't have supported stoning Ambrosino.

With a bar that high, it isn't surprising that Ambrosino has consistently given free passes to anti-gay bigots and spewers of hate speech. In a December piece for The Atlantic, Ambrosino argued that there's nothing “anti-gay”  about thinking that it's okay to exclude gay people from the institution of marriage.

Later in December, when Duck Dynasty star Phil Robertson sparked a controversy with an interview in which he equated homosexuality with bestiality, compared gay people with “drunks” and “terrorists,” and waxed nostalgic for the Jim Crow South, Ambrosino leapt to Robertson's defense. Writing for Time, Ambrosino asserted that the criticism of Robertson's comments showed that LGBT activists were the real bigots. As for Robertson himself, Ambrosino wrote that he seemed like the kind of guy he'd want to go fishing with.

In defending marriage equality opponents and people like Robertson from charges of homophobia, Ambrosino emphasizes the importance of being careful with language. The h-word, he stresses, isn't something to be used lightly. But when pressed in debates about what does constitute homophobia, Ambrosino generally suggests that some act of violence is required to cross the threshold. 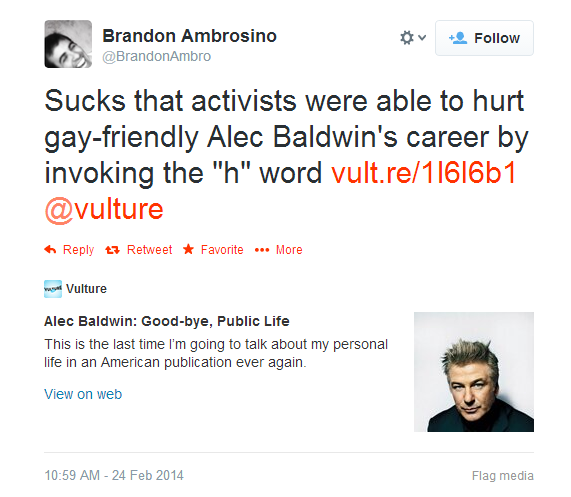 Ambrosino has continually made clear what little use he has for those dreaded LGBT activists. In a January essay for Time, he urged gay rights activists to learn a thing or two from Martin Luther King, Jr. and love their enemies by not calling out their most bitter opponents as homophobic - a gross perversion of King's work, given that the civil rights leader never hesitated to expose bigotry when he saw it.

But Ambrosino won't let such inconvenient facts cloud his worldview. He revels in the edgy and sensational - a fact that was never more apparent than in a January piece for The New Republic in which he claimed that he “chose” to be gay. It was an odd assertion to make for a writer who has admitted struggling to come to terms with his sexual identity after being immersed in a conservative religious background; why would he deliberately make his life more difficult by making such a choice?

Ambrosino never explained when or how he “chose” to be gay. Even in his “response” to critics, he refused to address the question. However, in an April 2013 interview, he recalled when he first experienced “gay feelings” and realized he “was attracted to men” - seemingly contradicting the notion that it was all a choice.

His “I Choose To Be Gay” claim inevitably raised the question of what Ambrosino thinks of discredited  “ex-gay” therapy programs. It turns out he finds them quite "[i]nteresting," as he tweeted in a link to a 2012 New York Times article on so-called conversion therapy:

“Ex-gay” therapy piques Ambrosino's interest, but gay pride parades decidedly don't. Such expressions of pride, he wrote in the Baltimore Sun, undermine the idea that “we're the same.” Ambrosino didn't weigh in on whether St. Patrick's Day Parades celebrating Irish heritage have damaged Irish-Americans' social position. After all, his real aim appeared to be proving that he just isn't one of those gays - one of those  “stupid whores”  who does things like hit on straight guys.

Ambrosino's gay contrarianism has won him a loyal base of right-wing fans - including Glenn Beck, Breitbart News, and TownHall.com - all of whom have lauded Ambrosino's work. It's not difficult to discern why. In repeatedly depicting the LGBT community as the real problem, Ambrosino offers the anti-LGBT right the reassuring message that they aren't doing anything wrong. And when they want to defend comparisons of gay people with mass murderers and child molesters, anti-gay conservatives have a gay writer they can hide behind to shield themselves from accusations of bigotry.

In Vox's Facebook post announcing Ambrosino's new gig, Ambrosino wrote that his work often “focuses on finding ways to reconcile the LGBT and religious communities,” echoing his earlier statement that he  “refuses to take sides.”  His body of work  and his growing right-wing fan base, however, make perfectly clear which side Ambrosino has taken.